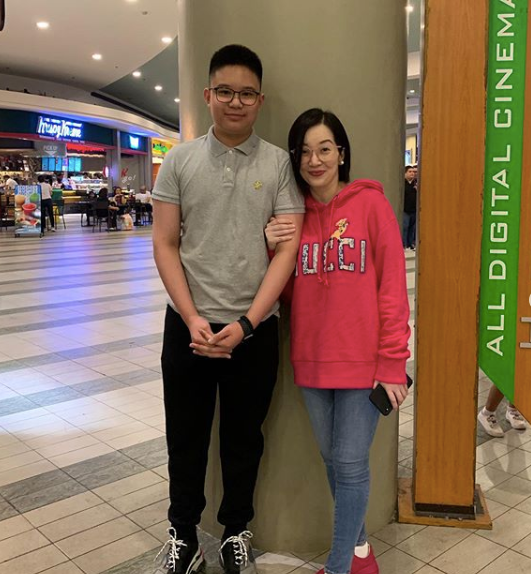 Aquino posted her youngest child’s Grade 6 performance on Instagram on Tuesday, Aug. 6, with none of the subjects he took going below 90.

“[Sixth] grade has to be capped off with me sharing how super proud I am,” she wrote. “Inalagaan po n’ya ko, marami kaming pinagdaanan, pero na-maintain ang grades (He took care of me, we have been through a lot, but he maintained his grades).”

She then shared that she and Bimby, 12, discussed that he will be homeschooled until 8th grade, after which he can study abroad “to fully enjoy his high school experience.”

She admitted though that she would have difficulty letting him go. “Sana na lang kayanin ko (I hope I can handle it) to let him have this opportunity even if it means this clingy mama will have to learn to be more independent.”

When one Instagram user (@mcchlohs) commented that Aquino could certainly handle being apart from Bimby, the mom of two promised, “I’ll visit OFTEN!”

A concerned Instagram user (@jeanys_shoes) suggested that Aquino allow her son to study in a school before going abroad for 9th grade “for him to realize the importance of being with other people.” 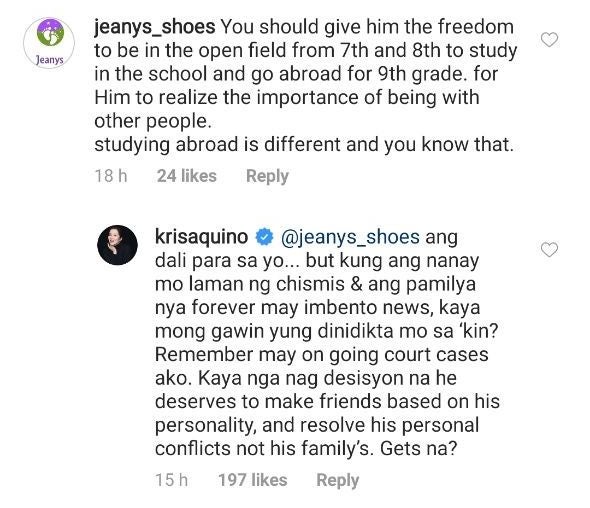 Aquino defended her decision, stating that it is easier said than done, considering that she is a public personality and that she has ongoing court cases. “Kung ang nanay mo laman ng chismis [at] ang pamilya n’ya forever may imbento news, kaya mong gawin yung dinidikta mo sa ‘kin?”

(If your mom is the subject of gossip and her family forever has news made up about them, can you do what you are dictating me to do?)

“Kaya nga nag-desisyon na (That is why it was decided that) he deserves to make friends based on his personality and resolve his personal conflicts not his family’s,” she said.

Another comment from one @ronaldraya12 said that Bimby would be going to an Ivy League school “for sure.”

Aquino shared that Bimby wants to take up film directing. However, she hopes he will become a doctor in the Philippines and then study his specialization abroad. “Ultimately it is his choice,” she stressed.

Bimby’s current homeschooling program follows an American curriculum, which is why it is likely he can ease himself into studying in the United States. Aquino assured concerned fans that along with his international education, he will study Philippine history in the 7th grade and that he is studying conversational Filipino.

In the past, Aquino expressed an interest in Bimby living abroad. In March 2015, she told him on her talk show “Kris TV” that he could pursue further studies such as a master’s degree abroad. She said in June 2015 on her show that she would like to live in the US for a year with him, citing her own experience when she was younger. She said it made her a more “well-rounded individual.”  /ra