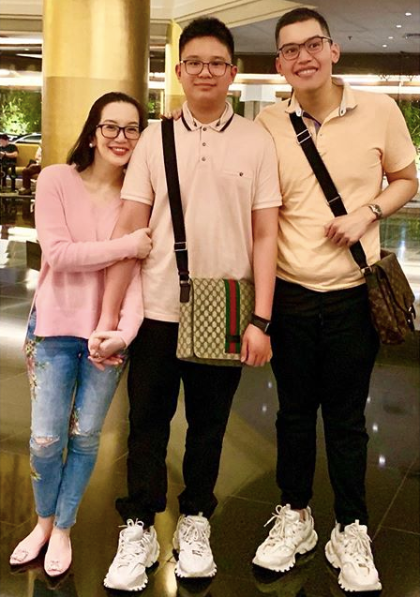 Kris Aquino is going on vacation with sons Bimby and Joshua before getting busy with work.  Image: Instagram/@krisaquino

Kris Aquino revealed that she will have a love scene in her upcoming horror movie “Kampon”—and her son Bimby has something to say about it.

The actress said in a YouTube video on Sunday, July 28, that she will shoot for “Kampon” from August to October. Derek Ramsay also stars in the movie, which will be screened at the Metro Manila Film Festival.

In the video, Aquino and her sons Joshua, 24, and Bimby, 12, were strolling through the airport before a trip to Japan, which she said was her time with them before she got busy with projects. She said she got her kids’ permission to do a horror movie with a love scene.

“Love scene for 20 prizes,” Bimby said. Aquino agreed to the deal, stating that she would get him 20 games for his Xbox. She also gave in to his second condition of five video games for each kiss.

She mentioned too Bimby’s take on her taping a love scene: “He said, ‘We’re in the Philippines. What kind of love scene is that really gonna be?’ And I said true naman. And he said, ‘You have endorsements.  I really doubt you’re going to show anything and what are you really going to show? You’re all bones.’ I said, that’s true.”

Aquino admitted to being nervous for the scene and had it toned down. “The way it was written, I think that’s not bagay for me. I think all other girls would say ‘kung ako ‘yon I would go for it kasi si Derek Ramsay ang ka-love scene.’ Sorry po, iba naman ako.”

(The way it was written, I think that’s not appropriate for me. I think all other girls would say ‘if that were me, I would go for it because the love scene is with Derek Ramsay.’ Sorry, I am different.)  /ra

Advised by fans to rest, Kris Aquino still wants to work in MMFF horror movie despite being ‘underdog’

Derek Ramsay’s most unforgettable kissing scene was with Kiray