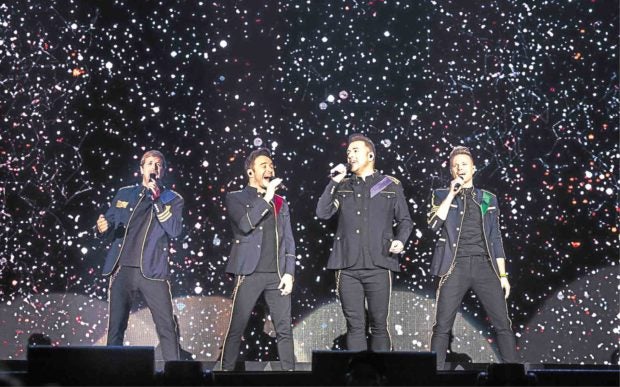 The recent Manila stop of Westlife’s “Twenty” world tour promised to be a celebration of its two decades in the music industry—a throwback to the late 1990s, when the Irish boyband was but a fledgling act on the scene.

“Back when all of you were a lot younger, as well!” Nicky Byrne teased the packed crowd on the group’s first of two nights at the Smart Araneta Coliseum.

Indeed, everyone’s “a bit older now.” Nicky and his mates Shane Filan, Mark Feehily and Kian Egan have nine—soon to be 10—children collectively. And it’s likely that some of their fans, many of whom were still in school when the group burst onto the scene, could very well be raising families of their own now.

But the songs—by virtue of nostalgia—didn’t seem to sound a day older than when they were first aired on the radio. And for nearly two hours, familiar sounds drifted across the venue, imploring everyone to sing their hearts out. “We’re going to take you through a journey through all those memories with our songs,” Shane said.

The boys did all of their big, defining hits like “Swear It Again,” “Flying Without Wings,” “My Love” and “If I Let You Go.” But because they have built quite a catalog through the years, there was no way they could fit everything in one set.

Making sure they got everything covered, they also did an intimate, acoustic medley that included “Fool Again,” “I Lay My Love on You” and “Queen of My Heart” which they interspersed with anecdotes and some lighthearted banter. And to keep things a little unpredictable, the four threw in a Queen medley, where the typically low-key Kian showed off his vocal chops.

Westlife is known for ballads and uplifting, midtempo anthems. Dancing isn’t exactly the members’ specialty. But they did try—gawkily but charmingly swaying their hips, kicking their feet and striking poses in unison during more upbeat songs like “Uptown Girl” and “When You’re Looking Like That.”

The night felt like Westlife’s tribute to their loyal Filipino fans, who have been attending their shows since they first visited the country in 2001. And the boys expressed their gratitude every chance they could.

“We remember the first time we came to this wonderful country and met all of you, guys. It really, really just blew our minds. I grew up in a farm in Ireland, in the middle of a countryside. I couldn’t believe I came all the way to the other side of the world and all these people knew my name,” recalled the band’s resident belter, Mark, who has beautifully preserved his voice’s rich and booming quality.

“My point is, since the very beginning, you guys have been passionate supporters of Westlife. And the concert this evening is to say thank you so much and we love you, Philippines. We love you!” he added.

Nicky, on the other hand, thanked the fans for constantly making them feel loved on social media, even during the days when they weren’t as active. 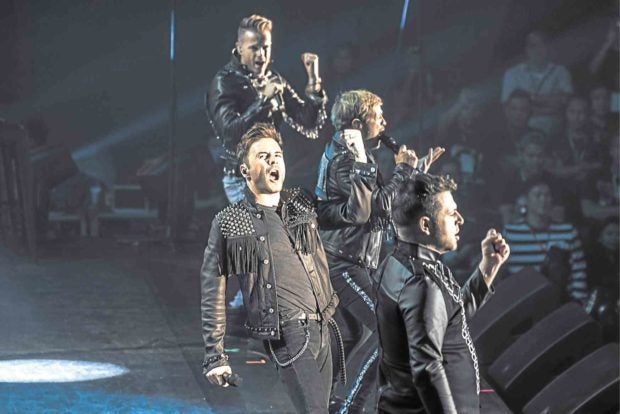 The boys expressed their gratitude every chance they could. —JOHAN ANDREW OCAMPO FOR WILBROS LIVE

“During our time off, we all went to do our own individual things. And amid all that, I would always remember you guys on Twitter, Facebook and Instagram. You supported us in everything we did, so thank you so much for making us trend on so many occasions in the Philippines,” he pointed out.

Westlife, however, wasn’t about to make its recent—and fifth overall—show in Manila (mounted by Wilbros Live) end up being a mere nostalgia trip. While they did a lot of revisiting, Shane, Mark, Kian and Nicky also did some introducing: The songs “Hello My Love,” “Dynamite” and “Better Man” are from the band’s upcoming 11th album, “Spectrum.”

The group collaborated with British pop star Ed Sheeran to update their sound—as if trying to send a message that Westlife is here to stay and won’t be content resting on the strength of their old material.

“It’s always nice to come to a country with so much memories,” Shane said. “But we have to create some new ones.”

Read Next
Herbert and Joey’s sons come into their own
EDITORS' PICK
WHO: Indoor airborne spread of coronavirus possible
Water remains our saving grace right now
Motostrada expands by handing over ‘Trident’ and adding new ‘Horseman’ to its growing business
No arrests to be made on 1st day of allowed pillion riding for couples — HPG
House panel set to meet for possible decision on ABS-CBN franchise bid
Digital hunt for Hyun Bin: 5 challenges for Smartees
MOST READ
‘I will always speak up for you’: Server on defending Fil-Am family from racist rant
‘Nouveau’: Agot Isidro hits Jinkee Pacquaio’s show of luxury Hermes, Louis Vuitton bikes
Bela Padilla on being tagged a Diehard Duterte Supporter: ‘Nope, not at all’
Solon withdraws support for ABS-CBN franchise renewal
Don't miss out on the latest news and information.