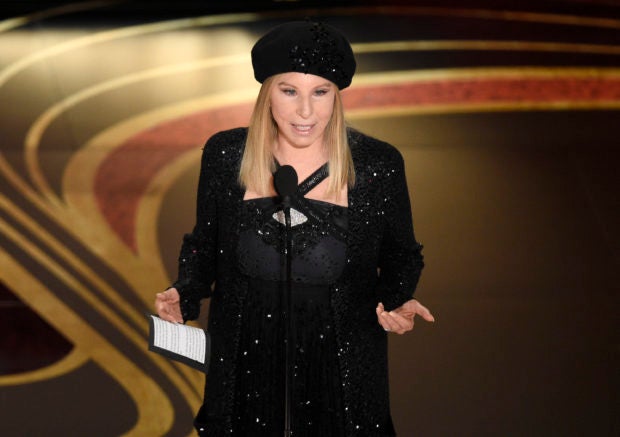 FILE – In this Feb. 24, 2019 file photo, Barbra Streisand introduces “BlacKkKlansman” at the Oscars at the Dolby Theatre in Los Angeles. Streisand’s return to New York City’s Madison Square Garden in 13 years attracted political figures like Bill and Hillary Clinton as well as pop superstar Mariah Carey. Streisand performed a show-stopping concert Saturday night, Aug. 3 in front of feverish fans, who gave the iconic singer several standing ovations, including Carey, who showed up to her seat as Streisand ended her first song of the night. (Photo by Chris Pizzello/Invision/AP, File)

The iconic singer performed a show-stopping concert Saturday night, receiving standing ovations from fans including Carey, who showed up to her seat as Streisand ended her first song of the night.

In characteristic fashion, Streisand brought politics into the concert, warning Republicans in the audience to cover their ears before launching into a remixed version of “Send in the Clowns” that took jabs at President Donald Trump. Streisand had covered the Stephen Sondheim song for “The Broadway Album” in 1985.

“Maybe he’s poor, till he reveals his returns who can be sure, who is this clown,” she sang as the audience erupted in applause. “Something’s amiss, I don’t approve, now that’s he’s running the free world where can we move, maybe a town, who is this clown?”

After the song, a photo of the White House — with circus tent on top of it — appeared on the screen, followed by Trump in clown makeup. An altered version of his Time magazine 2016 Person of the Year cover showed him with a red nose under the words “clown of the year.”

Streisand, a proud Democrat who has supported the Clintons as well as Barack Obama, released a song last year that questioned Trump and pleaded for change called “Don’t Lie to Me.”

Streisand thanked the political figures in the audience for their efforts and said she wished she could have sung at Hillary Clinton’s inauguration like she sang at Bill Clinton’s 1993 inaugural gala.

Audience members snapped photos and captured video of the Clintons as they exited MSG. Bill Clinton went up to Dinkins after spotting him in the audience, and they embraced one another and exchanged words.