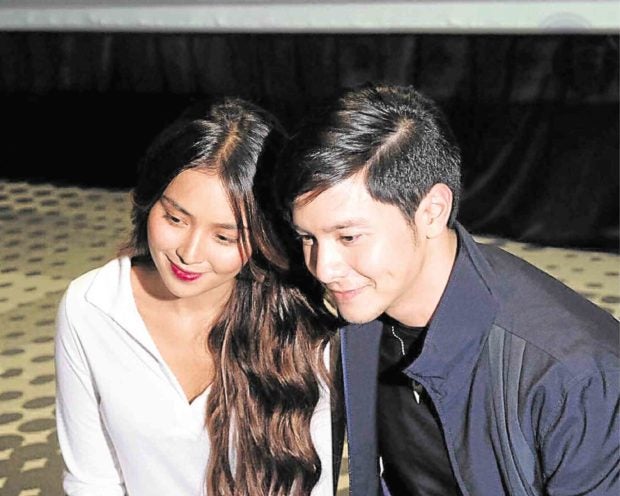 I hope this will be the start of many collaborations of different networks and their respective artists,” said GMA 7 contract star Alden Richards, whose movie “Hello, Love, Goodbye,” is being produced by rival network ABS-CBN and costars Kathryn Bernardo, one of the Kapamilya channel’s most bankable talents.

“How we got to this point took a really long process. I will never forget Direk Cathy’s (Garcia-Molina) reaction when she saw Kath and me being interviewed. On the table close to us were two microphones, one from GMA 7 and another from ABS-CBN. She said, ‘Pwede pala,’” Alden recalled. “I’m so thankful to GMA 7 for allowing me to do this. After all, our common goal is to be able to tell a good story, something that will inspire our audiences.”

“Hello, Love, Goodbye,” shot entirely in Hong Kong, is a production of Star Cinema, the Kapamilya network’s film production arm. While there were other top Kapuso stars who also crossed over—like Dingdong Dantes and Dennis Trillo, who had made films for Star Cinema, Regal Entertainment and Viva Films—only Alden is a talent of GMA Artist Center.

“I’m OK to cross over, too,” said Kathryn when asked if she would be willing to do a project with GMA Network Films. “Alden and I are very happy. We saw that in this movie, the line that divides the Kapuso and Kapamilya networks has been blurred. Ang sarap ng feeling!”

Director Cathy said the story was about two strangers meeting in the most unfortunate circumstance in Hong Kong. “We thought, who would best fit the role of Ethan for Kathryn’s Joy? We couldn’t think of anyone from ABS-CBN because we feel that she has already worked with most of them,” explained Cathy, adding that it was Olivia Lamasan, ABS-CBN creative department head, and Roxy Liquigan, ABS-CBN music ecosystem head, who thought of Alden.

“The idea excited me right away. I thought, ‘Posible pala ’yon?’ I felt excited because I have never watched Alden act, unlike other talents whom I know, more or less, what to expect. The idea seemed so fresh to me,” she added.

Meanwhile, Kathryn admitted she got surprised when she first learned of the plan. “I already knew that I would have a hard time adjusting to working with someone other than DJ (Daniel Padilla’s nickname). We’ve been onscreen partners for almost seven years. I told DJ about this and of the fact that, if I agree to do the project, I’d be away for a long time.”

Asked to recall working on their first scene together, Kathryn said: “It felt so weird, because it was also the scene when our characters would meet for the first time. I guess Direk also wanted to capture the awkwardness.”

Alden, on the other hand, said he understood why Kathryn initially felt ill at ease. “For the longest time, she was with Daniel in almost all of her projects and promos, while I have been paired with different artists already. Our first scene was kind of heavy,” he said.

The cast and production team stayed in Hong Kong for an entire month. As part of their immersion, Kath said she attended Cantonese classes, while Alden took bartending lessons, prior to flying to Hong Kong.

“On our first night there, they made us work at a bar. This served as our warm-up, so our movement would look natural onscreen,” she recalled.

In the movie, the audience will see the struggles that OFWs in Hong Kong go through, he said. “Self-love plays a big factor here. They leave the country not only because they need to provide for their families, some of them do because they actually want to pursue their dreams,” Alden explained.