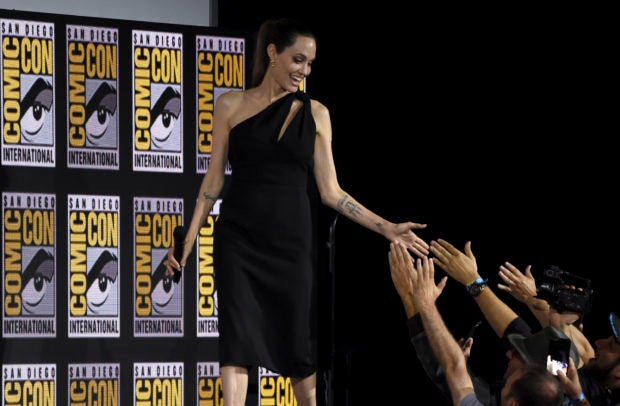 Angelina Jolie greets fans as she walks on stage at the Marvel Studios panel on day three of Comic-Con International on Saturday, July 20, 2019, in San Diego. (Photo by Chris Pizzello/Invision/AP)

Jolie says she’s already in training and is going to work 10 times harder than she has on any action film before.

Phase Three of the Marvel Cinematic Universe ended this summer with “Spider-Man: Far From Home” and “Avengers: Endgame.”

Feige also says “Endgame” will surpass “Avatar” as the highest-grossing film ever in a few days. /gsg

Read Next
Piolo reacts to Iñigo-Maris breakup
EDITORS' PICK
Notice of 2020 regular meeting of stockholders June 18, 2020
SM prepares for ‘safe malling’
Leveling up your ‘lutong bahay’ with the kitchen companion you never knew you needed
NBI, Immigration to join hunt for ‘underground’ medical clinics
2 Chinese nationals arrested in raid on another unlicensed COVID-19 hospital in Pampanga
P2.2 trillion in losses: Cost of COVID-19 impact on PH economy
MOST READ
Revillame tells Roque: ABS-CBN is in my heart despite being in rival network
NCR is ready for GCQ — Palace
LOOK: Robredo, Vico Sotto, check Community Mart ops in Pasig
Año: Quarantine passes not needed in GCQ, movement restricted to essential travel
Don't miss out on the latest news and information.