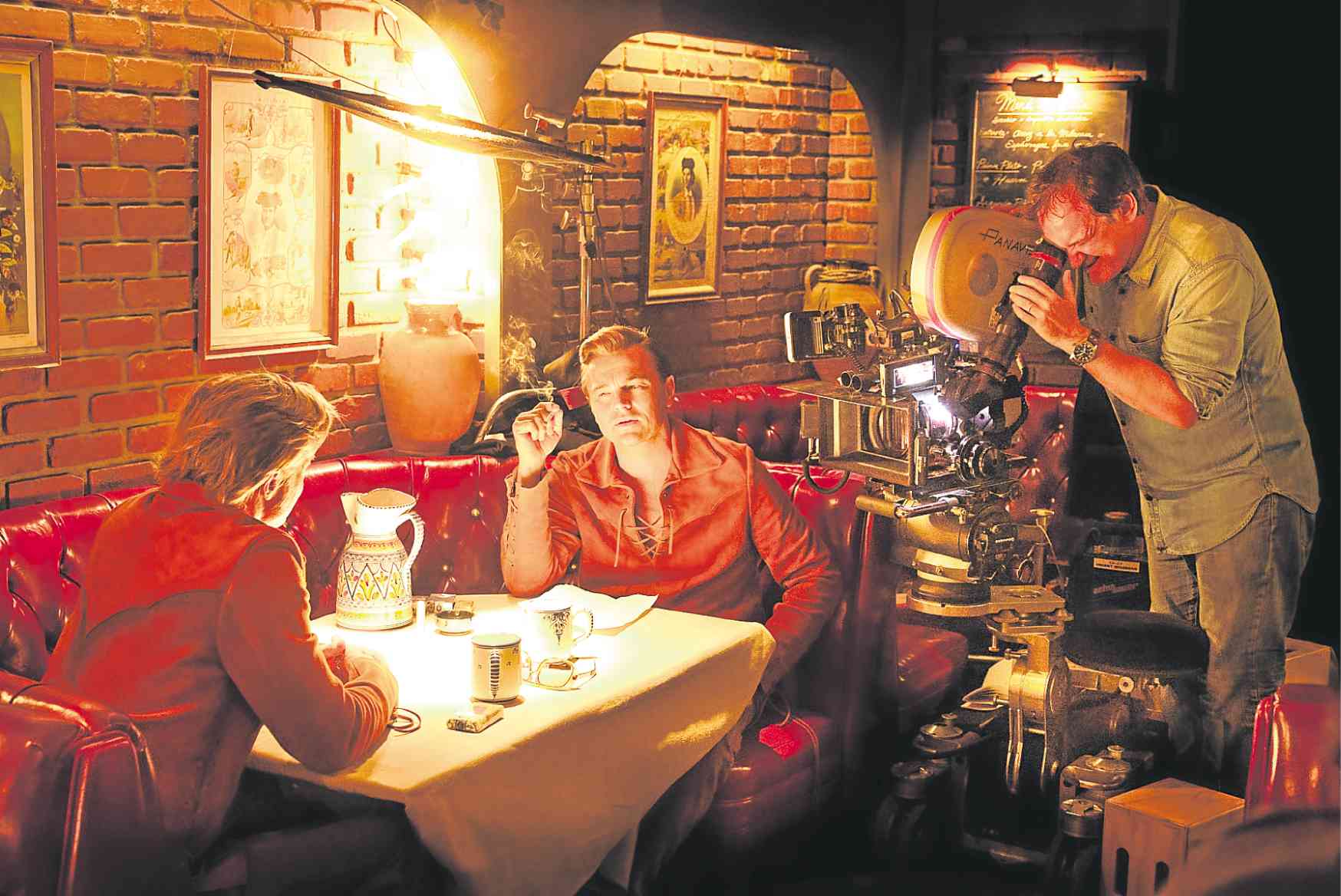 Tarantino (right) with his “Once Upon a Time in Hollywood” leads, Brad Pitt (left) and Leonardo DiCaprio. —SONY PICTURES

LOS ANGELES—Quentin Tarantino’s encyclopedic knowledge of film and television is on full display in his “Once Upon a Time in Hollywood.”

In one scene, two pals—Leonardo Di Caprio’s fading star Rick Dalton and Brad Pitt’s stuntman Cliff Booth—drive down Hollywood Boulevard which Quentin lovingly recreated to its 1969 era, complete with movie palaces’ marquees all lit up with titles and stars’ names.

When we were watching “Once Upon a Time in Hollywood,” we wished we could freeze each frame so we can read all the titles and “starring” actors in each marquee. A Vogue theater’s marquee displayed “The Night They Raided Minsky’s” with the stars’ names Jason Robards and Britt Elkland.

So our recent talk with the wonderfully loquacious filmmaker invariably veered toward his impressive collection of film prints.

Quentin probably has the only prints of some movies by directors around the globe, including those of Filipino filmmakers Cirio H. Santiago and Eddie Romero.

“When I started collecting films, which naturally I started with 16 mm prints and eventually graduated to 35, but even when I was collecting 16 mm prints, maybe I would get a Japanese monster movie and then all of a sudden, whoa, that’s a really great print,” began Quentin, dressed in a vintage-looking printed shirt.

“But it’s not just enough to hold it in a vault or a storage facility. You also need to show it. It needs to see the light of a projector, entertain people and not just sit on a shelf.  So I take that responsibility very seriously.  And that’s one of the things that I love doing. At my theater, the New Beverly Cinema [in Los Angeles], now I have a venue so I can show these prints.

“It’s getting an LA screening for the first time in maybe 40 years and I’m happy about that.  But yeah, I do have an extensive collection of Cirio H. Santiago movies that I have brought to Manila and I have screened in Manila.”

The 56-year-old auteur pointed to us that he has shown some Filipino movies from his private collection, including the late Cirio’s “The Muthers,” which starred Jeannie Bell, Jayne Kennedy, Rocco Montalban and Tony Carreon.

“Once Upon…” is full of references to old movies and TV shows. Quentin is aware that all those arcane cinematic nods will be lost on some filmgoers.

“I watched the film with a few audiences,” Quentin shared. “There are people who watch the sequence where we put Rick in ‘The Great Escape.’ They have no f*cking idea what they’re watching (laughs). They don’t know that that’s supposed to be Steve McQueen. They’re like, that’s just another movie Rick is in, that’s fine, that’s OK.

“To me, that’s unfathomable. I mean, of course you would know that that’s McQueen in ‘The Great Escape.’ That’s his f*cking jacket, one of the most iconic jackets in cinema history.

“Rick could go to the Philippines and star as the American guy who leads the Filipinos fighting against the Japanese, which a lot of [American] actors did back then. That was a foreign route you could go.

“Or you could go to Japan and star in a giant monster movie like Nick Adams or Russ Tamblyn did.  But the lucrative place to go was Italy to make Spaghetti Westerns, especially if you were coming off a TV show that was a Western show, because that had syndication. The show got played in Italy. That is actually just a rite of passage for a lot of actors at the time.”

To help him capture the waning years of Hollywood’s Golden Age in the late ’60s, Quentin has the perfect leads in Leonardo and Brad. He agreed that the two actors were among the vanishing breed of stars with genuine movie star aura.

“I do think they are the last group of, at least male actors, who actually have what I would consider that bona fide movie star quality, in the ’90s and maybe the first 10 years of the 2000s. In this last decade of the 2000s, I don’t see anyone. 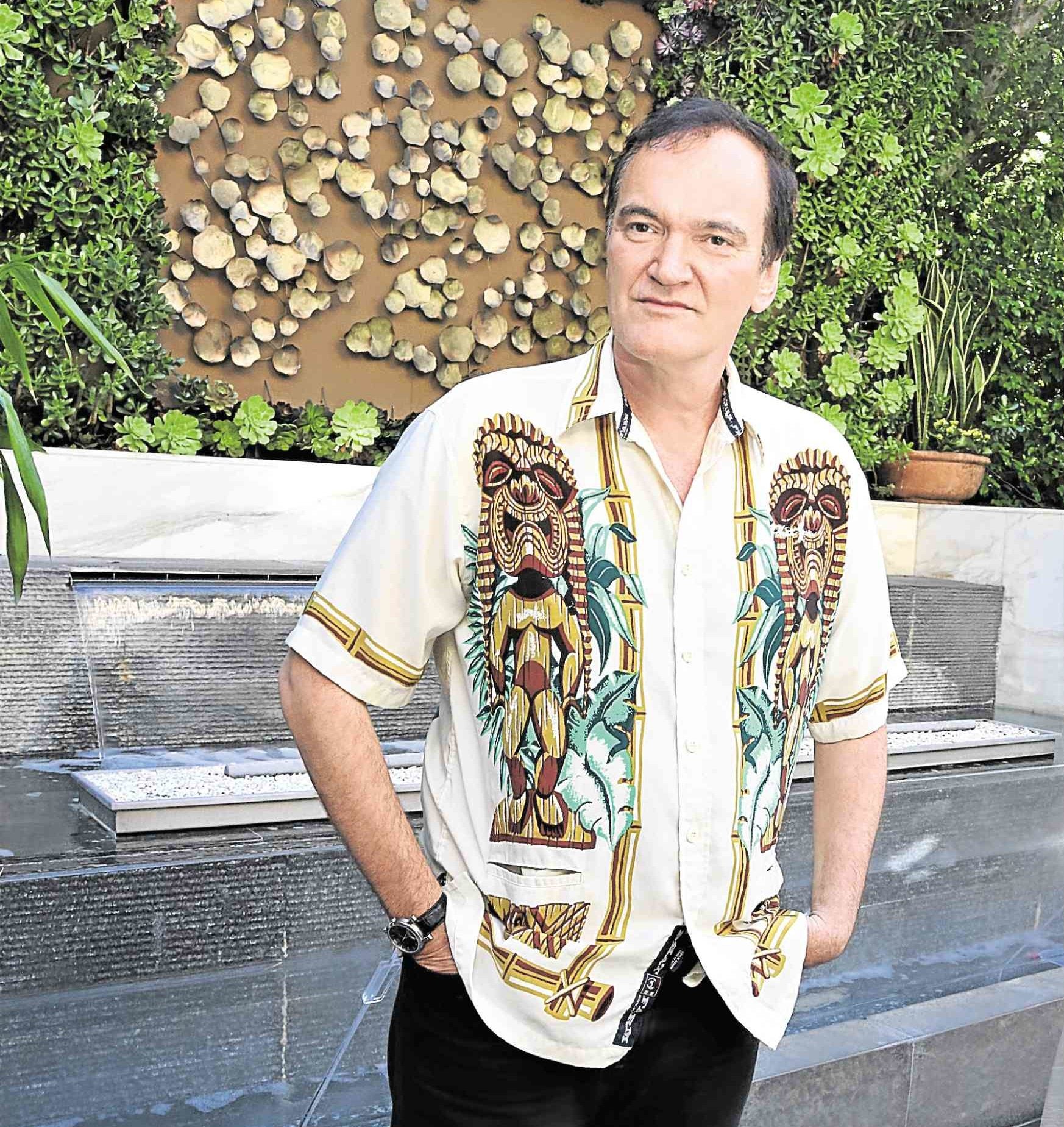 “Now, part of that though is just perception. Part of that is, well, of course, we feel that way about Brad and Leo because they have been around for 20 years or Johnny Depp or whoever else you are thinking about.

“Jennifer Lawrence broke somewhere in the last 10 years and I think she is an absolute, bona fide movie star. Jennifer Lawrence is maybe this generation’s Bette Davis. She’s fantastic.  But there is a situation though where actors becoming famous … but they are not becoming stars to the degree that you want to see the next movie they are in.

“What’s happening is, this actor plays a Marvel superhero and it’s the superhero who becomes famous. And now, they want to see that guy play that superhero.”

Set against the backdrop of the Charles Manson murders, “Once Upon…” mixes fact and fiction that will send moviegoers Googling this and that after they watch the film, which also stars Margot Robbie as Sharon Tate.

Even the gory twist toward the end is partially based on Quentin’s knowledge of old TV shows. “One of the things about the movie is, I am taking fictional and real characters and I’m mixing them together. For me, in a way, it’s not too dissimilar from say, what EL Doctorow did with ‘Ragtime.’ And Sharon Tate is the one I’m spending the most time with, so I don’t get to go chapter and verse on everybody.

“But with a lot of the different characters, McQueen, Bruce Lee, the killers in the car, I tried to take something that I learned about them, something that they said in interviews or statements that they made.

“And so, when Bruce Lee talks about martial arts tournaments being patty cake and how Muhammad Ali and Sonny Liston are real warriors, he said things like that. And he said them in the same arrogant way that my Bruce says it.

“And that whole concept that the Manson kids had grown up watching violence on television and now they were simply reaping what society had sowed. That was a big theme to them. Sandra Good talked about it a lot. We are your children that you showed ‘Gunsmoke’ to every day.

“She is talking about Vic Morrow, I loved that guy on ‘Combat.’  Do you know how many times I watched that guy kill people? He killed about 10 people every episode, and that was every episode and he was my favorite guy!”

Asked what he is proudest of, the iconic filmmaker behind such films as “Pulp Fiction,” “Reservoir Dogs,” “Kill Bill” and “Inglourious Basterds” and winner of Oscars and Golden Globes (two each) answered, “I have so many things to be proud of. I guess the real answer to that question would be the body of work, the films themselves.

“But to go a little bit more in the spirit that you mean the question, my proudest moment … would be winning the Palme D’Or for ‘Pulp Fiction.’