‘Lion King’s’ visual inventiveness is its own reason for being 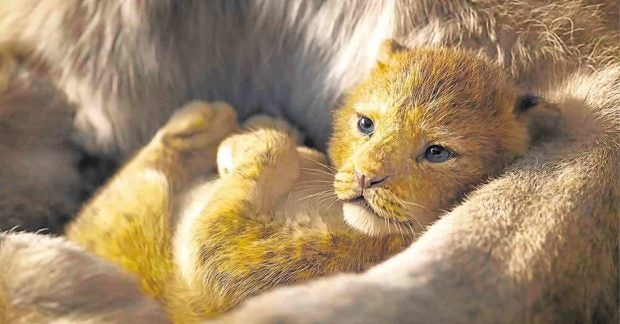 Will Simba embrace his destiny?

How hard is it to recreate magic on the big screen? There’s never any tried-and-tested formula for successful revivals, especially if the underwhelming likes of Guy Ritchie’s “Swept Away” and Gus Van Sant’s shot-by-shot retelling of “Psycho” come to mind.

But for every “Arthur” or “Footloose” that gets bungled up, there are also remakes that leave an indelible mark on viewers, like Michael Mann’s “Heat,” Matt Reeves’ “Let Me In,” Alfonso Cuaron’s “A Little Princess,” Martin Scorsese’s “The Departed” and “Cape Fear” and, more recently, Bradley Cooper’s “A Star Is Born.”

Sure, we believe classics shouldn’t be revived—if the right director doesn’t come along.

It’s like asking the West End or Broadway not to stage William Shakespeare’s “Hamlet” and Joseph Mankiewics’ “All About Eve” if Laurence Olivier and Bette Davis aren’t behind their revivals.

In the case of OPM, will the music scene be livelier if “Tuwing Umuulan at Kapiling Ka,” “Pangako Sa ’Yo” and the Apo’s enduring hits can’t be revived by the likes of Regine Velasquez, Sharon Cuneta and our genre-breaching bands?

OK, so let’s get the elephant in the room out of the way.

As the saying goes, if it ain’t broke, don’t fix it. So, the idea of watching “The Lion King’s” do-over 25 years after its 1994 original, which has a 94-percent rating on Rotten Tomatoes, sometimes feels like you’re putting the animated likenesses of Simba, Nala, Pumbaa and Timon out to pasture. 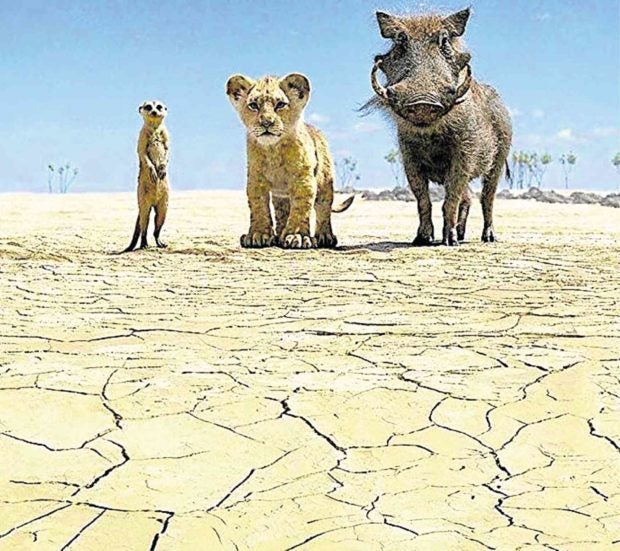 But it’s hard to hold director Jon Favreau to account for his decision to follow a reverential by-the-numbers approach to the 2019 reboot. After all, life in the age of social media plays out differently on a grittier and bleaker landscape. So, a live-action iteration of Simba’s coming-of-age tale makes a whole lot of sense in the larger scheme of things.

As with life that man navigates in varying degrees of difficulty, everything exists in a delicate balance in the Pride Lands of the African savanna, where Simba’s cautionary story unfolds.

The film is about a cub who keeps getting into scrapes, and a manipulative enemy who’s tired of begging for scraps.

It tells the story of impressionable Simba (voiced by JD McCrachy and, later, Donald Glover), son of King Mufasa (James Earl Jones) and Queen Sarabi (Alfre Woodard), who must overcome tragedy and betrayal to assume the throne that is rightfully his.

A forbidden trip to the so-called Elephants’ Graveyard, far beyond the well-lit boundaries of the Pride Lands, exposes Simba and his best friend Nala (Shahadi Wright Joseph and, later, Beyoncé) to a cackle of hungry hyenas, led by Shenzi (Florence Kasumba).

But tragedy strikes when Simba ignores the warnings of Zazu (John Oliver), the hornbill who acts as Mufasa’s trusted assistant, not to wander off in places where he can’t be protected.

To find his “beastly roar,” Simba follows Scar to a narrow gorge, and ends up putting his father’s life at risk in a wildebeest stampede orchestrated by Scar and Shenzi’s cohorts.

In an attempt to atone for his guilt, the physically and emotionally exhausted cub runs away and, soon after, meets Timon (Billy Eichner), a meerkat, and Pumbaa (Seth Rogen), a warthog, who save the young lion from a wake of ravenous vultures. 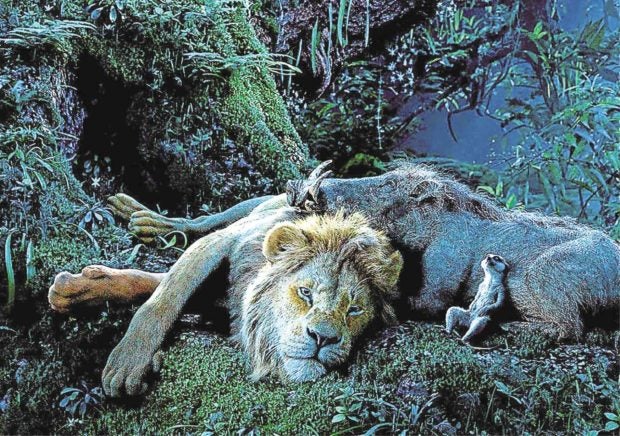 Can Simba escape his destiny? When he crosses paths with Nala again, the guilt-stricken lion, now all grown-up and 400 pounds heavier, must face his fears to save not just his mother, but also the future of the people his beloved father swore to protect.

Will Pride Rock’s mysterious shaman Rafiki (John Kani), a long-tailed mandrill, be able to convince Simba that he is his father’s worthy son, and must therefore take his place in the Circle of Life?

“The Lion King’s” visual inventiveness is its own reason for being, which makes this delectable revival an easy fit for a new generation of viewers. It doesn’t hurt that its voice cast turns in spot-on characterizations that deliciously distinguish themselves from their 1994 counterparts.

True, the initial effect is more tactile than emotional, but the “feels” are just the same when viewer empathy to Simba’s uphill struggle for redemption begins to kick in.

Beyoncé’s “Spirit” sounds like a companion piece to “Circle of Life,” and plays well alongside the musical’s other popular show tunes, like “I Just Can’t Wait to be King,” “Hakuna Matata,” “He Lives in You,” “Never Too Late” and “Can You Feel the Love Tonight?”

Not necessarily, but that doesn’t make Disney’s visually sumptuous live-action remake any less viewable. After all, its lovable feline’s cautionary tale—no pun intended—needs to be told and retold.

Read Next
Though still grieving loss of mom, Rayver Cruz now in a better place and mind-set
EDITORS' PICK
EuroMillions Superdraw: A lottery draw unlike any other is coming to the Philippines
‘Justice will be done,’ Duterte assures as he vowed probe on Jolo incident to bare ‘truth’
Water remains our saving grace right now
Smart releases Hyun Bin’s second TVC
Current dominant strain of COVID-19 more infectious than original—study
DOLE: Return of OFWs’ remains from Saudi to be ‘delayed,’ deadline moved to ‘early next week’
MOST READ
BREAKING: Duterte signs anti-terror bill into law
Duterte tells military: No other president looked at you the way I did
Locsin warns of ‘severest response’ if China’s army drills in SCS ‘spill over’ to PH domain
Vico: Cleanup of bidding process saved Pasig gov’t P415M
Don't miss out on the latest news and information.