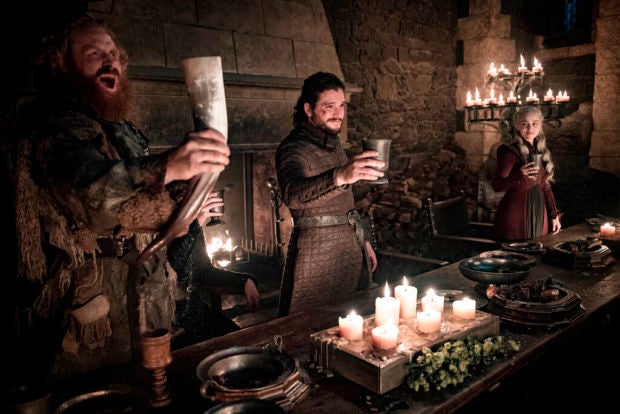 (L-R) Kristofer Hivju, Kit Harington and Emilia Clarke in a scene from “Game of Thrones”. Image: HBO/Helen Sloan via AP

LOS ANGELES — “Game of Thrones” is seeking to claim the Emmy Awards version of the Iron Throne one last time.

When the Emmy nominations are released Thursday, July 11, the HBO fantasy saga could be in the running for television’s top honor for its eighth and final season. It has earned three previous top drama series awards and is the defending champ.

Emilia Clarke and Peter Dinklage are among the “Game of Thrones” stars who could make the cut. Clarke is trying for her first best drama actress bid after earning a trio of supporting nominations, while Dinklage is a three-time Emmy winner who is competing again as a supporting actor.

Other drama series vying for top honors include “Killing Eve”, ”Pose”, ”Bodyguard”, ”Ozark” and “This Is Us”, the NBC drama that could be the sole broadcast series to earn a top bid.

“Veep” which holds a trio of best comedy series Emmys, is in the hunt for its final trophies after wrapping its seven-season run.

“The Big Bang Theory” which ended this year after 12 seasons, is among its possible competitors, as are “Barry”, ”Fleabag” and 2018’s winner “The Marvelous Mrs. Maisel”.

The 71st Emmy Awards will air Sept. 22 on Fox, with the host yet to be announced. HM/NVG

Read Next
Diddy’s ‘Making the Band’ officially coming back to TV
EDITORS' PICK
EuroMillions Superdraw: A lottery draw unlike any other is coming to the Philippines
‘Justice will be done,’ Duterte assures as he vowed probe on Jolo incident to bare ‘truth’
Water remains our saving grace right now
Smart releases Hyun Bin’s second TVC
Current dominant strain of COVID-19 more infectious than original—study
DOLE: Return of OFWs’ remains from Saudi to be ‘delayed,’ deadline moved to ‘early next week’
MOST READ
BREAKING: Duterte signs anti-terror bill into law
Duterte tells military: No other president looked at you the way I did
Locsin warns of ‘severest response’ if China’s army drills in SCS ‘spill over’ to PH domain
Current dominant strain of COVID-19 more infectious than original—study
Don't miss out on the latest news and information.