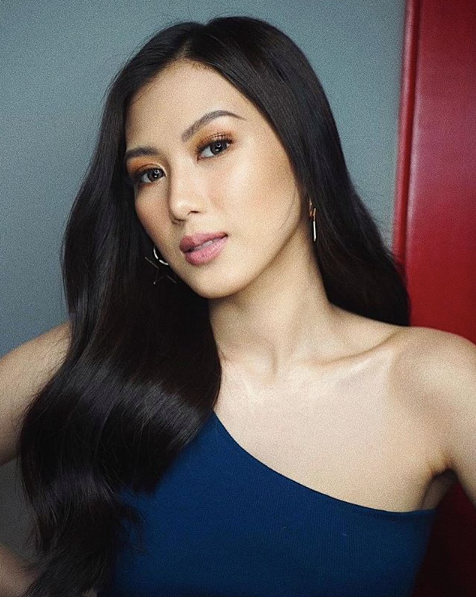 Alex Gonzaga was surprised that she was chosen to do a project about breast implants.  Image: Instagram/@cathygonzaga

The actress and YouTube star shared on her Instagram Stories on Monday, July 15, an email requesting for a collaboration regarding breast implants.

Gonzaga placed laughing emoji on a screenshot of the email and said, “Nakaka-hurt!! Why would you think I need [one]!! Hanggang sa Korea nakarating ‘to!?”

(How hurtful! Why would you think I need [one]!! This reached even Korea?) 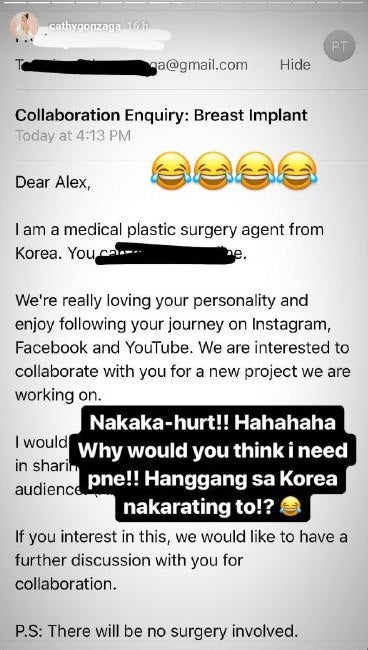 Gonzaga previously poked fun at her being flat-chested. During her 2015 concert at the Araneta Coliseum, her bra was seen sliding down under her crop top. Later in the show, Vice Ganda poked fun at the wardrobe malfunction, stating that her hair was thicker than her chest. Gonzaga joked back that she was wearing her mom’s bra.

Although the email stated that there would be no plastic surgery involved, it seems Gonzaga would rather focus on other funny topics for the entertainment of her 3.8 million YouTube subscribers.  /ra

Arci Muñoz on speculation that her butt is fake: ‘Ya gotta see my mama’s’

Chienna Filomeno dismisses claims she had a boob job

Read Next
Netflix to edit ’13 Reasons Why’ suicide scene
EDITORS' PICK
vivo brings to the Philippines a powerful smartphone with a slimmer body, the vivo Y02s for only PHP 6,499
Apple warns of flaw that lets hackers into iPhones, Macs
46% of schools nationwide to have full face-to-face classes on Aug. 22
House energy committee chair Arroyo bats for cheap electricity
What to watch out for when selecting a video surveillance solution
Heads may roll at BOC, says Palace if sugar smugglers are allowed to use recycled import permits
MOST READ
DepEd to give teachers P5K cash allowance within first week of classes
LOOK: Miel Pangilinan dazzles in glittery pre-debut shoot
DOJ indicts bank officer in $2.1 billion Wirecard fiasco
PH importing sugar after all: Marcos okays 150,000 MT
Follow @NGunoINQ on Twitter
Don't miss out on the latest news and information.