BEVERLY HILLS, Calif. – The pressure was on for young actors Shahadi Wright Joseph and JD McCrary when they got word that they’d been cast as the voices of young Nala and young Simba in “The Lion King.” Not only was it an ambitious remake of an iconic film, but it was their first major Hollywood project. 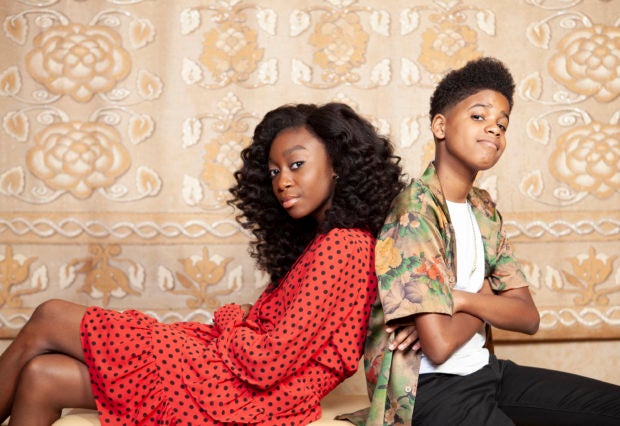 This July 10, 2019 photo shows Shahadi Wright Joseph, left, and JD McCrary posing for a portrait at the Montage Hotel in Beverly Hills, Calif., to promote their film “The Lion King.” (Photo by Rebecca Cabage/Invision/AP)

Then they found out that their characters adult voices would be done by Beyoncé Knowles-Carter and Donald Glover, and it took “just waiting to be king” to a whole new level.

But director Jon Favreau was confident that they could fill the “big shoes” of their adult voices for the film, which opens nationwide Thursday evening. Fourteen-year-old Shahadi, for one, had a pretty big advantage: At age 8, she played young Nala in the Broadway production. In fact, casting director Sarah Finn submitted only her name to be considered. Favreau was on board.

JD, 11, was less of an obvious choice. He didn’t have much of a resume in film work. Finn, who had helped find Neel Sethi for “The Jungle Book” years ago, had to cast a wide net to find her young Simba, from seasoned veterans to open call unknowns. Favreau said JD broke through as the front-runner when he saw YouTube videos of him singing.

Then, as the filmmakers were getting ready to make the then-8-year-old JD an offer, they learned that he’d just collaborated with Glover on the Childish Gambino song “Terrified.”

“Donald definitely vouched for JD and said he was great,” Favreau said. “I felt there was something pre-ordained about (it).”

JD said getting that call was, “One of the biggest moments of my life.”

The two young actors had the benefit of being able to record together in the studio, which doesn’t often happen for animated films. It allowed them to riff and play off of one another’s personalities.

“I feel like if I didn’t work with JD we wouldn’t have that chemistry on the screen,” Shahadi said. “It would have been mindless actors just saying the lines and not actually feeling them.”

She found it particularly liberating to be able to mess up and improvise in the studio. It was a stark contrast to performing for a live audience on Broadway, where she said you “cannot make a mistake.”

Favreau also made sure that the young actors had a sense of the world they were inhabiting through a Virtual Reality demo that allowed them to see Pride Rock and the rest of the settings.

“The VR was really cool,” McCrary said. “It was like your first sneak peek, but you were in it, you could feel it.”

It’s been three years since Shahadi and JD were cast, which for kids at that age can feel like a lifetime of waiting. But they’ve been busy. Both worked in other films released this year. Shahadi played the daughter of Lupita Nyong’o in Jordan Peele’s “Us,” and JD appeared in “Little” alongside Marsai Martin.

On the day after the world premiere in Los Angeles, both were riding high from finally seeing the movie on screen with a receptive audience, many of whom could be heard crying at key parts.

“I made a lot of people cry,” JD said proudly.

And then of course there is the fun of being in proximity to so many stars.

“It was awesome! So cool!” JD said, nearly jumping out of his seat with excitement. “I was backstage with Chance the Rapper, Beyoncé, Jay-Z, Blue Ivy, Donald Glover, everybody!”

Shahadi said she was still recovering from meeting Beyoncé for the first time.

As for what’s next, both are looking forward to more acting roles, and they even have a suggestion for the next one. /gsg