‘We hope to become a band that sings every moment’—DAY6 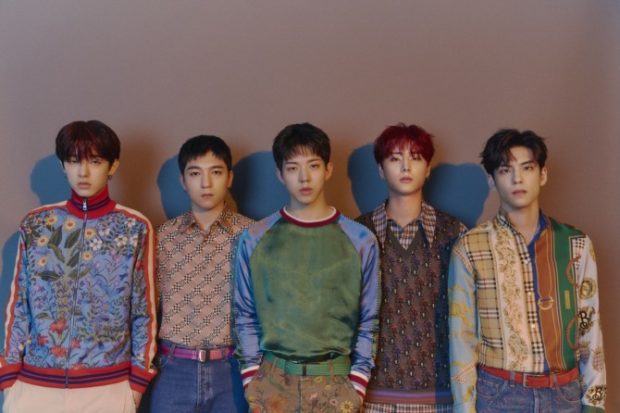 JYP Entertainment via The Korea Herald

From uplifting pop anthems, such as “I Like You,” to bombastic “Shoot Me,” a dramatic shift in the group’s sonic style, DAY6 has kept venturing toward band-oriented music with an experimental mindset.

And after seven months of preparation, the band is back with the new EP “The Book of Us: Gravity,” fronted by lead track “Time of Our Life,” which the group said was the ultimate ode to youth.

“Though our previous songs revolved around ‘youth,’ our new single touches on the topic of relations between people beyond youth. As the Korean title of ‘Time of Our Life’ translates into ‘in order to become one page,’ the song compares life to a book and each page to a passing moment,” said the band’s bassist Young K in a recent interview with The Korea Herald in Seoul.

He added, “The song actually reminded me of our concerts, where strangers harmonize under one goal, as the song depicts the fluttering feeling at the beginning of relationships. And what we tried to deliver throughout the EP is that in order to get to know someone, one has to know oneself.”

Overflowing with a hopeful message, “Time of Our Life” is built on bright pop-rock sound reminiscent of a Japanese anime tune. DAY6 shared that the positive vibe was intended to delight fans, who’ve waited for the band’s new release since “Remember Us: Youth Part 2” in December last year.

“Since it took us a long time to drop the new EP, we wanted it to make listeners happy. With our main focus on cheerful lyrics, we also blended oriental codes and powerful western rock sounds, so that the song could sound familiar,” the band’s leader Sungjin said.

Having recently reached new heights with album sales and world tours both in Korea and abroad, DAY6 also talked about being the only rock band among fellow acts under JYP Entertainment, saying that one of the perks was having leeway with its music.

The band hasn’t received a song from the agency’s founder Park Jin-young yet, due to the gap between its own music and the label’s style. “But we’d like to work with him in the future, as we truly admire his songwriting skills,” Young K said.

Addressing the band’s rather sluggish start, Wonpil chimed in, saying, “There was no need to rush at first. All we wanted was to try something different, something only DAY6 could do.

“We didn’t want to take advantage of belonging to a powerhouse agency, but instead hoped to attract fans with our own good music. I still remember the day when our banner hung down our agency building, and I’m very proud to be under JYP right now.”

While rock has yet to become a mainstay in the K-pop scene, DAY6 went on to share that it felt proud to see the genre slowly picking up steam among K-pop listeners, with the band being at the forefront of the transition.

“I think it’s a very positive change for us and other bands. We believed that our success depended on our sincerity and tried to appeal with our performance — the emotions and energy we emanate onstage. Now that we can exercise some influence, we hope to yield positive results and happiness,” Sungjin said.

Set to embark on its world tour in August, DAY6 wrapped up the interview by expressing confidence in its upcoming shows.

Kicking off in Korea on Aug. 9, the band will head stateside for its first shows in New York City in September and other US cities, such as Boston, Miami, Dallas and Chicago. The tour will continue throughout Asia, Australia and Europe.

“Compared to our initial gigs that were held in little theaters, we have grown so much. Now that we can fill the entire session with our own music and the venues have changed, we are making some arrangements in our performance styles as well. Also, I think we’ve gotten the knack of handling unexpected situations that are likely to happen during live performances. We are much more confident now,” Sungjin said.

“We’d like to become a band that sings every moment in life, not only (in our) youth. It would be great if people think of our songs in any circumstances,” Young K added.

“The Book of Us: Gravity” features tracks “For Me,” “How to Love” and “Best Part,” all of which were written and composed by the members.

Read Next
‘We compare, no wonder we’re anxious’: Kiana Valenciano speaks up on pressure to be viral, cool
EDITORS' PICK
Leveling up your ‘lutong bahay’ with the kitchen companion you never knew you needed
SM prepares for ‘safe malling’
Notice of 2020 regular meeting of stockholders June 18, 2020
LIST: What to expect in areas under GCQ, MGCQ
Drilon wants repeal of penal provisions in proposed Bayanihan extension law
DOTr bares 2 phases of public transport revival in GCQ areas
MOST READ
LIST: What to expect in areas under GCQ, MGCQ
Hong Kong loses US ‘special status’ — what next?
Duterte approves Metro Manila’s shift to GCQ starting June 1
Bocaue Mayor Joni Villanueva passes away, Sen. Villanueva confirms
Don't miss out on the latest news and information.