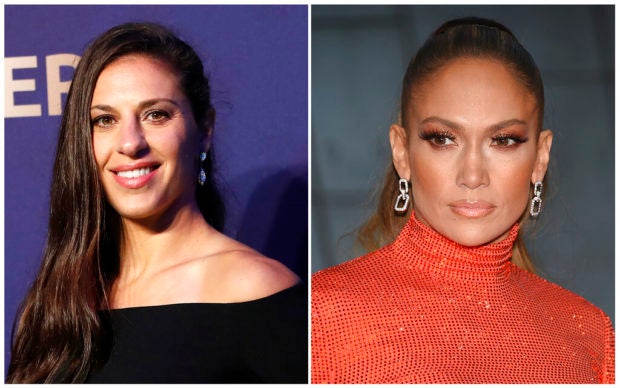 Jennifer Lopez pulled Carli Lloyd from the audience to the stage at Madison Square Garden in New York on Friday, July 12, 2019, working her sensual moves on the soccer star. Image: AP Photo

Jennifer Lopez pulled Lloyd from the audience to the stage at Madison Square Garden in New York City on Friday night, working her sensual moves on the soccer star.

After Lopez told the crowd that Lloyd was in attendance, her fiance Alex Rodriguez escorted Lloyd to security guards who walked her to the stage, where she sat on a chair shaped like a stiletto shoe.

Lopez congratulated Lloyd for her team’s win and then told the athlete: “Got a little present for you.”

“Actually Carli, I got two presents for you,” the pop star said. “Girls, will you take care of Carli and give her a little birthday present?”

Lopez left the stage and two of her female backup dancers gyrated on Lloyd as the 2009 hit “Birthday Sex” by R&B singer Jeremih played in the background. Lloyd’s 37th birthday is Tuesday.

.@CarliLloyd from the #USWNT just got a lap dance from @JLo at Madison Square Garden and it was everything #JLoMSG #JLOItsMyParty pic.twitter.com/xZpS2JPi3H

Lopez returned to the stage, and she and her female dancers moved sensually in front of Lloyd, who was cheered on by the audience.

“Carli, you doing OK?” Lopez asked, then sitting on Lloyd’s lap as she sang a slowed-down version of “If You Had My Love,” her debut single released in 1999.

The U.S. women’s national soccer team has been on a celebratory run since beating the Netherlands to capture a record fourth Women’s World Cup title earlier this week. On Wednesday, the team won trophies at The ESPYS and was honored with a ticker tape parade in New York City.

Lloyd wasn’t the only special guest at the concert: Lopez’s 11-year-old daughter, Emme Maribel Muñiz, joined her onstage to sing a duet, which earned a standing ovation from the audience.