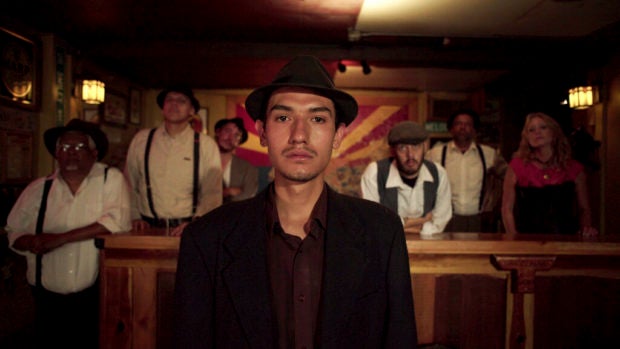 This undated photo provided by 4th Row Films shows Fernando Serrano, 23, who plays a striking miner in “Bisbee ’17,” a story of how some 1,200 miners, most of them immigrants, were pulled violently from their homes in Bisbee, Ariz., by a private police force and put on cattle cars for deportation to a desolate area of New Mexico in 1917. Image: Jarred Alterman/4th Row Films via AP

BISBEE, Ariz. (AP) — The darkest, most violent chapter in the history of Bisbee was an open secret for decades in the funky old Arizona copper town 7 miles (11 kilometers) north of the U.S.-Mexico border.

But few residents knew the details of how about 1,200 miners, most of them immigrants, were pulled violently from their homes a century ago by a private police force and put on cattle cars for their deportation to a desolate area of New Mexico.

The filming of “Bisbee ’17,” a documentary about what happened July 12, 1917, was a history lesson for residents recruited to play historical figures in the production filmed exactly 100 years later that weds documentary and collective performance. It is, at turns, a Western, a musical and a ghost story.

The film mixes the town’s past and present, the residents dressed in period clothing but moving through present-day Bisbee. Newly deputized strikebreakers with ancient guns stand in a classroom complete with an overhead projector and modern light figures. “Enjoy the AC while you’ve got it!” a man standing at the front of a modern bus tells residents dressed as miners as they travel to the rail cars for their deportation.

After premiering last year at the Sundance Film Festival, “Bisbee ’17” will be nationally broadcast for the first time Monday night on the PBS documentary series POV. In Arizona, it will be shown at 9 p.m.

It’s the sixth film for director Robert Greene, filmmaker-in-chief for the Murray Center for Documentary Journalism at the University of Missouri. A previous film “Kate Plays Christine” won a Jury Award for Writing at Sundance 2016. “Owning The Weather,” his first documentary, was screened at the COP15 Climate Change Conference in Copenhagen.

Greene said he learned of the town of Bisbee around 15 years ago when he first visited southeastern Arizona to help his then-future mother-in-law fix up an old cabin.

“I completely fell in love with the town,” Greene said of the quirky community of old hippies, immigrants, biker mechanics and descendants of miners and company executives. The town today leans to the political left and has an active cultural scene that includes live theatre. It features Victorian-style houses built on hilly terrain, along with other architectural gems. The gaping hole at Bisbee’s edge that was once the Lavender Pit copper mine is a constant reminder the area’s mining history.

Greene said he started thinking of ways to make a film about the Bisbee deportation shortly after learning about it. As the 100th anniversary approached two years ago, he said, “we knew it was time.”

The documentary tells how the bosses at the Phelps Dodge copper mining operation feared a strike by miners who sympathized with the “Wobblies,” members of the radical Industrial Workers of the World.

The U.S. had just entered World War I, and company executives worried that foreign-born miners would try to hamper the war effort.

Working with mining bosses, the local sheriff hastily deputized about 2,000 strikebreakers to round up about 1,200 miners, mostly immigrants from Mexico and eastern Europe. They were led by gunpoint to the baseball field in the nearby community of Warren, locked inside train cars and shipped off to Hermanas, New Mexico.

The narrative emerges through the residents’ personal stories: a woman whose grandfather deported his brother; a former mining company boss who remains convinced the deportation was justified; and Fernando Serrano, 23, whose mother had been deported back to her native Mexico and jailed on drug charges.

Viewers watch Serrano undergo a political awakening as he plays the role of a Mexican miner, singing the Spanish-language version of the union anthem “Solidarity Forever” to the tune of the “Battle Hymn of the Republic.”

While exorcising the demons of Bisbee’s past, the townspeople make a statement about today’s treatment of marginalized people, the filmmaker said.

“You cannot keep from what is happening at the border when you watch the film,” said Greene, referring to the chaos that has erupted along the U.S.-Mexico border as the Trump administration seeks to keep out a wave of asylum-seekers, mostly from Central America.

“It echoes other moments in our nation’s history when fear was used to motivate opposition,” he said. NVG

Adopted as a child, Filipino-born man faces deportation from U.S.