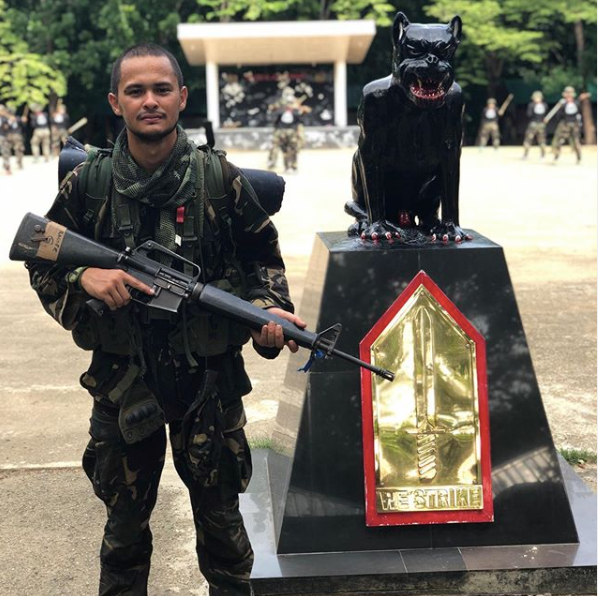 Matteo Guidicelli has praised the sacrifices of soldiers after he underwent a 30-day Scout Ranger training.  Image: Instagram/@matteog

Actor Matteo Guidicelli’s deep admiration for the military has earned him some critics, especially after he chided netizens who questioned his sense of patriotism.

In media interviews, Guidicelli has praised the sacrifices of soldiers after he underwent a 30-day Scout Ranger training.

Actor and spoken word poet Juan Miguel Severo spoke up on his statement on Twitter Friday, July 12: “This ‘sacrifice’ that you speak of has caused entitlement, and it is paid for by our Lumad brothers and sisters who have long perished under the corrupt and abusive institution you revere.”

This “sacrifice” that you speak of has caused entitlement, and it is paid for by our Lumad brothers and sisters who have long perished under the corrupt and abusive institution you revere.

“The families displaced, the men killed, the women harassed, the children orphaned—they are supposed to be part of the flag you salute to, but the uniform you wear is what’s been keeping them away,” he said.

“I know Matteo is sure he’s right. But the certain isn’t always right. The most dangerous villains are those certain that what they do is for the greater good. And no, I’m not calling him a dangerous villain. But I’m afraid he’s been wearing the uniform and conviction of one.”

The “Hows of Us” actor added that Guidicelli’s statements broke his heart because he has been a fan and liked working with him. He said he hoped the “Bagani” actor would immerse in communities instead.

Actress Chai Fonacier has also blasted Guidicelli for calling on people in show biz to stop “talking smack about different issues.” In a now-deleted Facebook post, she said he had “never [been] put in a position where he has to complain [about] his rights.”  /ra

Matteo Guidicelli: ‘I’m representing the Army, I’m not endorsing anybody’

Matteo Guidicelli: Duterte’s respect for men and women in uniform ‘beyond words’