Why Lulu Wang keeps her film a secret 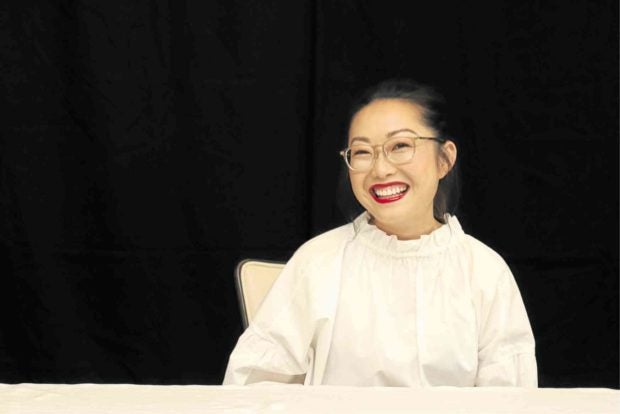 LOS ANGELES—Writer-director Lulu Wang has quite a dilemma. She made a film, “The Farewell,” based on the story of her real-life grandmother. When Lulu’s Chinese family learns that their grandmother has only a short while to live, they decided to keep her in the dark.

Now, “The Farewell,” starring Awkwafina, is critically acclaimed and will be shown in China. It will be harder for Lulu and her family to keep the secret from their matriarch.

Lulu, 36, originally wrote the story for an American radio program, “This American Life.”
Born in Beijing, Lulu and her family immigrated to Miami, Florida, when she was 6 years old.

After college, the writer-director moved to Los Angeles. She directed her first feature, “Posthumous,” starring Jack Huston and Brit Marling.

This is Awkwafina’s first dramatic and lead role. What made you take a chance on her? When I cast her in the role, I really knew her from her music videos, as a rapper. My brother introduced her work to me because, as he said, “There’s this girl. She’s like you. She’s small and she’s Asian (laughs). But she raps.” And that’s how I discovered her work.

When my producers brought her name up, I was like, “The rapper—that’s who you think I should cast to play me? How do you see me?”

So it was definitely an unconventional choice, but I met up with her for coffee, and she told me that for her, Awkwafina, that’s also a role that she created to do her music and comedy.

Her real name is Nora Lum. She was raised by her Chinese grandmother, with whom she’s very close. So she brought her own personal connection and relationship to her grandma to this role. And she sent in an audition tape, because neither one of us knew if she could act, dramatically anyhow.

When she sent in the audition tape, the performance was so emotional. I knew that it would carry the movie.

Awkwafina’s character is based on your own life. When you were filming Awkwafina, which scene moved you most? She was very moving in many scenes. But one of the scenes that really resonates with me is her dynamic at the dinner table. Because when you see her in New York on her own, she’s funny, rambunctious, very strong and independent.

But when she goes back to China, it’s like she returns to being a child again, because that’s her role in the family. That’s how her grandma treats her.

There’s something that’s both lovely about it, but also a bit sad because she’s trying to navigate how she fits in this family now as an adult.

Also, nowadays, I’m sure many millennials can relate to this. You can be in your 30s and still feel like a child, and your family treats you like one because you haven’t found success and are not financially stable, or maybe you’re single.

So, all of those pressures kind of infantilize her and make her this child. I related to that and to see that up onscreen was very emotional for me.

Is it true that your grandmother is still alive? Yes.

How is it possible logistically to keep the grandmother clueless about her health? Yeah, it’s been challenging, especially because the movie is going to come out in China.

I did this story first for “This American Life” (a radio program). I said it’s going to be on the radio and they (relatives) were like, “Your grandmother doesn’t listen to the radio (laughs). It’ll be fine.”

Then I said, “We are going to make it a movie.” As I said it earlier with my parents, they were like, “Who knows if anyone is going to see the movie? Movies are so hard to make. You may never even make it (laughs). Are they paying you to write the script? Great, go write the script.”

Then I said, “We got green-lit, and we have a cast. We are going to shoot it in China.” They were like, “You never know what could happen. Maybe it will be a massive failure.”

So every step of the way, we sort of just punted this problem down the line. And of course, my grandma wanted to know what the movie is about. And she saw actors that we were casting and her sister plays herself, my great aunt, little Nai Nai, in the movie. And Ellen, little Nai Nai’s dog, is her real dog.

We were shooting in her neighborhood. Nai Nai wanted to know what the movie was about. She asked, “Who is my sister playing?” So we said, “It’s a movie about our family.” She asked, “What about the family?” “They come back to China from abroad for a wedding.” She’s like, “That’s just what happened to us!”

“Exactly, it’s based on that.” She’s like, “Great!” I said, “There’s a lot of cultural differences, and hilarity ensues.”

So she thinks it’s a family comedy about a wedding reunion, which it is. That’s as far as she knows.

Of course, now with the movie coming out, we’re still trying to figure out how to deal with that.

To be a director is difficult. To be a female filmmaker is even tougher. And to be a minority female director is extremely difficult to accomplish in Hollywood. Can you talk about the path that got you where you are today? It took me a long time to even have the confidence to tell my own stories.

When I was first pitching this movie, the thing that people kept asking was, “Is this an American story or a Chinese story?”

But then, I would say yeah, “I want it cast with all-Asian or Asian-American ensemble. And a lot of it is going to be in authentic Chinese language, which means there will be subtitles.”

People are immediately like, “Then it’s not an American film. It’s got to be a Chinese film.”

So I would go to Chinese investors, then they would say, “OK, great, we can make it as a Chinese film. But then, Billi can’t be the main character, because her perspective is too Western, and Chinese audiences are not going to relate to that. And actually, she’s quite weird.”

Can you talk about your own upbringing? My family and I immigrated when I was 6 years old. I was raised in Miami. My brother is 11 years younger than me. He was born in America.

So, for most of my life, I was an only child. And it was a lot of pressure. In many ways, my parents gave up a lot, sacrificed a lot.

It’s the typical immigrant story, and my parents just wanted me to succeed and do well. They didn’t necessarily know what that meant back then.

For them, they were the routes that they saw that other people had taken—lawyers, doctors and maybe even journalists, because they saw Connie Chung (laughs).

But they didn’t see people who looked like me, women, Asians, making films in this country or being an artist of any kind.

So it was always this push and pull but, at the same time, my mother was a writer. She was the editor of a literary gazette in Beijing, so she herself took an unconventional route.

TAGS: Awkwafina, Lulu Wang, Only In Hollywood, The Farewell