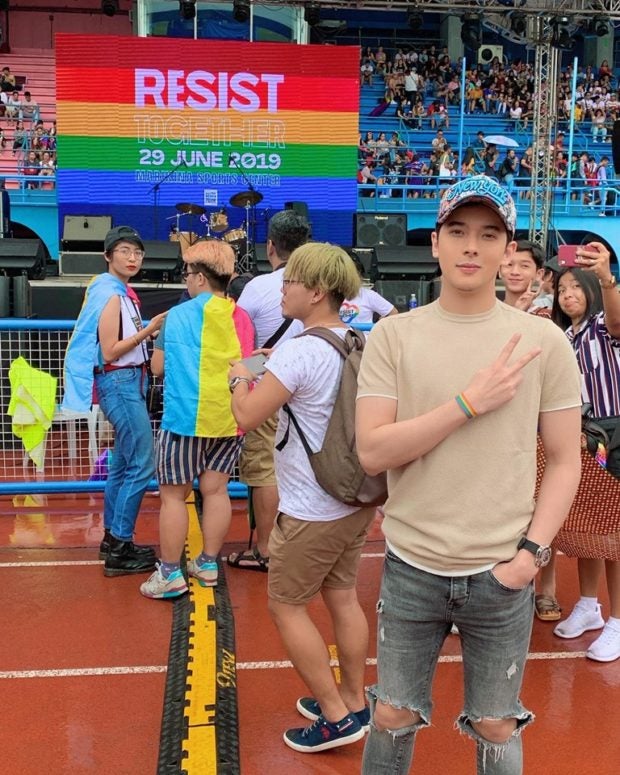 Christian Bables educated fans about what it means to be an LGBTQ+ ally after it was hinted that he was gay for attending the Metro Manila Pride March.

The actor showed his support for the LGBTQ+ community during the Metro Manila Pride parade on Saturday, June 29. It led to a fan stating that she “deserved an explanation” on Facebook and her friend commenting, “I told you,” implying assumptions about his gender preference because of his presence at Pride.

Bables explained on Twitter on Monday, July 1, that believing in equal rights for the LGBTQ+ community is not an indicator of someone being gay or tomboy. He said too that he believes in equal rights because they are people too.

He urged the fan and her friend to avoid gender stereotyping and think about how their judgmental words can hurt others.

(They have been poisoned with wrong mores. But being poisoned does not mean they are afflicted. They can still be cured  as long as they are open to learn.)

Actress Chai Fonacier lauded Bables for expressing his stance. “Many males in the entertainment industry, straight or LGBTQ+, are afraid to either support or be part of the fight for human rights because of a general fear of being called bakla (gay), and in effect, their jobs will be affected,” she wrote on Twitter on July 3.

Bables’ breakout role was in “Die Beautiful” where he played a gay beauty queen. He is part of an LGBTQ+-themed film “The Panti Sisters” from the same team behind “Die Beautiful.” It is slated for release in September during Pista ng Pelikulang Pilipino.  /ra