This is ‘The Voice Kids’ | Inquirer Entertainment
Close
menu
search

This is ‘The Voice Kids’ 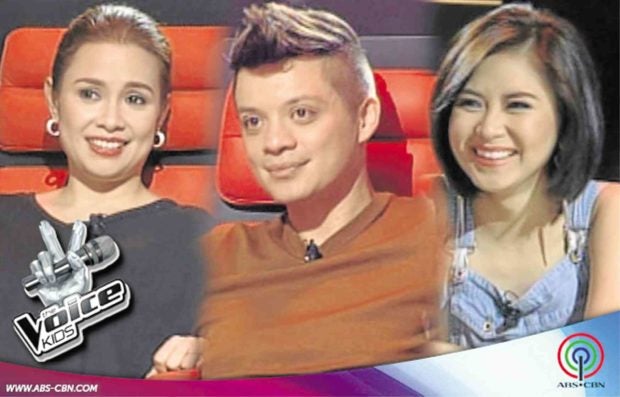 From left: the author, Bamboo and Sarah Geronimo

We are back. We’re most definitely back.

By the time you read this, Team Sarah, Kamp Kawayan and FamiLea will each have amassed 18 young artists in contention for the grand championship later this year.

The young hopefuls ranging in age from 6 to 12 years old from all over the country, as well as places outside of it, will be crossing their fingers and hoping for the best, with plenty of hard work thrown in.

It has been a good couple of years since we all got together for “The Voice Teens,” which yielded its champion, 14-year-old Jona Marie Soquite. One would think that after that long absence, we would feel a little rusty in the joints and not as quick on the uptake. What we discovered instead was that it was just like riding a bike: once you learn, you never forget.

And perhaps our sense of hearing or ability to listen was heightened by the time away, each of us doing our own thing with concerts, tours, musicals and travel. We’ve allowed ourselves to steep in our work and live life as fully as we can and, in doing so, widened our respective musical vocabulary and life perspective.

Needless to say, we’re all having a wonderful time.

I’m not going to lie; the hours spent per day in that spinning red chair are long. We’re called to be in the building early in the morning for hair and makeup. (Bamboo, whose own grooming needs are less involved, is called in a little later.) That’s followed by a briefing with our team writers and producers, who remind us of the basics (speaking in Tagalog is one of them, and there is a laminated placard with “Tagalog” written on it to remind mostly Bamboo and me).

But at the end of the day, what’s important is finding artists who are ridiculously talented, hoping that they have good attitude to go with their gifts.

Amidst the hard work that these taping days are, we still have time to inject a little (or a lot of) fun.

We bring out a ton of props just for fun, such as storybooks, funky tripped-out sunglasses and toys. The kids also bring along a few things for us, like decorative jars and homemade pastries.

A few of the artists also show off their talent in other fields, such as in martial arts or dance. I remember one child even shared with us his unique vocal warm-ups, which had all of us coaches lying on the floor to try them out.

One thing’s for sure, we have found some amazing, incredible kids this season.

It always boggles my mind how much singing talent exists on our shores, and I’m thankful there are many avenues for them to showcase what they have. By the time we end this season, we’ll be physically exhausted and mentally spent, but absolutely fulfilled.