Creator of HBO’s ‘Euphoria’ says it tries to be ’empathic’

In the pilot of the new HBO series “Euphoria”, a young woman is about to be assaulted by an angry drunk in the kitchen at a house party. Her hand happens to find a kitchen knife.

She raises it. “You want to hurt me?” she screams at her attacker. 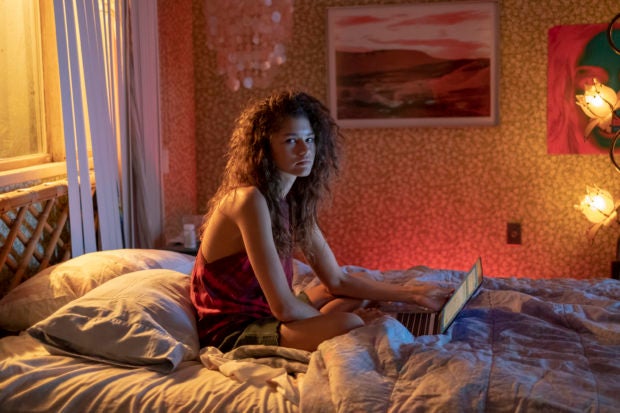 Zendaya in a scene from “Euphoria,” airing Sundays at 10 p.m. ET on HBO. Image: HBO/Eddy Chen via AP

“Put the knife down,” the drunk now pleads.

Then she slashes her own arm.

Appalled as her blood spills, the bully backs off. The assault is abruptly canceled.

Sam Levinson, the creator and writer of the show, drew on his own youth for the scene. At 16, he avoided getting beaten up at a party by similarly out-crazying his bully.

“Part of what I love about this show is that I can take experiences that happened in some way, shape or form and I can give them away to these other characters who can experience it in their own way and in their own circumstances,” he said. “That’s ultimately what storytelling is all about for me.”

The eight-episode “Euphoria” follows a group of suburban high school students as they try to construct an identity amid shifting allegiances and against a backdrop saturated with social media. The soundtrack ranges from 1950s crooner Jim Reeves to Beyoncé, Lil Wayne and Drake, who is an executive producer of the show.

The show stars former Disney Channel star Zendaya as Rue, an on-and-off recovering drug addict who narrates her life. It also stars Hunter Schafer, a transgender woman to whom Levinson gave the knife scene. The show has drawn criticism for its frankness, but its creator says it captures something important.

“It’s about addiction and it’s about friendship and it’s about the people who you meet who can change your life, and it’s about holding onto these small moments of joy when they come your way because everything feels fleeting when you’re younger,” said Levinson, who also directed five episodes.

Other recent shows — like Netflix’s “Sex Education” and “13 Reasons Why” — have explored the underbelly of teen life, but not like this. On “Euphoria”, there is ugly sex, full frontal nudity, and several disturbing and violent scenes, with drug highs that are depicted with room-turning or face-melting effects.

Parents — with the exception of Rue’s mom — are often portrayed as out of step and self-medicating, usually with a beer or wine. Or they are sociopaths, like one father who has a video collection of his rapes. In the absence of any helpful adults, Rue gives tutorials about how to beat a drug test or the finer points of sexting.

She takes whatever she can to reach nothingness — cocaine, psychedelics, oxycodone, liquid valium or fentanyl. “I know you’re not allowed to say it, but drugs are kinda cool,” she explains in the second episode. “I mean, they’re cool before they wreck your skin and your life and your family.”

Levinson, the 34-year-old son of director Barry Levinson, drew on his own struggles with addiction, and said it was important for him to show the relief that drugs can bring to someone who suffers from anxiety or depression — as well as the pain.

“Portraying it in an honest way is the best way to create empathy for addicts and their families because I believe empathy is the only way that we can communicate,” he said.

It is a rough ride that even the stars of the show feel. “There are some days where I go home and I’m tired and I’m like, ‘All I did was cry today,'” the 22-year-old Zendaya said. “I just need to hibernate for, like, three days and watch ‘Harry Potter.'”

On the night the show premiered, the actress tweeted a warning, noting it was designed for “mature audiences.” She added, “It’s a raw and honest portrait of addiction, anxiety and the difficulties of navigating life today.”

“Euphoria” is rated TV-MA, and HBO does offer a crisis text line and links on the show’s page to addiction and mental health support groups, as well as suicide prevention advocates like The Trevor Project and The Jed Foundation.

Yalda T. Uhls, a former movie executive who studies how media affects the behavior of adolescents, has mixed feelings about the show. She has watched episodes with her 19-year-old daughter and says it prompted important conversations that would never have occurred without “Euphoria”. Yet neither mom nor daughter recognized the extreme world represented onscreen.

“I applaud any show that encourages understanding and empathy, or that shows teens and adolescents as they really are,” said Uhls, who heads the Center for Scholars & Storytellers at the University of California, Los Angeles. “I’m just not sure this represents all high school experiences.”

Levinson said few things he has seen onscreen take the lives of young people seriously or, if they do, approach them with a certain judgment or slyness.

“At the end of the day, I believe it’s really important that we’re compassionate and empathic toward young peoples’ experiences,” he said. “It was important to me to make a show that gave their inner lives the weight they deserve.” RGA/JB

Read Next
Bad Bunny, Khalid to perform in Apple Music’s ‘Up Next’ tour
EDITORS' PICK
Leveling up your ‘lutong bahay’ with the kitchen companion you never knew you needed
SM prepares for ‘safe malling’
Notice of 2020 regular meeting of stockholders June 18, 2020
LIST: What to expect in areas under GCQ, MGCQ
Drilon wants repeal of penal provisions in proposed Bayanihan extension law
DOTr bares 2 phases of public transport revival in GCQ areas
MOST READ
LIST: What to expect in areas under GCQ, MGCQ
Hong Kong loses US ‘special status’ — what next?
Duterte approves Metro Manila’s shift to GCQ starting June 1
Bocaue Mayor Joni Villanueva passes away, Sen. Villanueva confirms
Don't miss out on the latest news and information.