‘Jeopardy!’ champ Holzhauer a winner in TV ratings, too 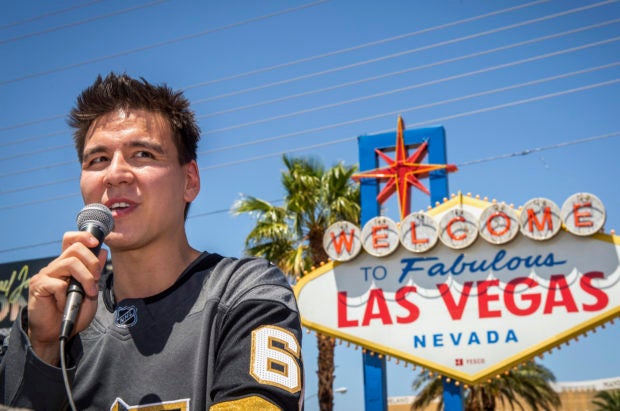 “Jeopardy!” sensation James Holzhauer speaks after being presented with a key to the Las Vegas Strip in front of the Welcome to Fabulous Las Vegas sign in Las Vegas. Holzhauer’s “Jeopardy” winning streak is still going and he may be track to surpass Ken Jennings’ record earnings in the next month. Image: Las Vegas Review Journal/Caroline Brehman via AP

A case can be made that “Jeopardy!” savant James Holzhauer is one of the year’s biggest TV stars, although a short-lived one.

An estimated 14.5 million people watched him on June 3, when the professional gambler from Las Vegas lost for first time after 32 consecutive wins and $2,464,216 in prize money, the Nielsen company said. He left with the 16 highest one-day scores in the show’s history.

The television ratings also put him in good company. In fact, no television series this season (football excluded) averaged more viewers per episode on the first night they aired. Not “The Big Bang Theory”, not “NCIS”, not even “Game of Thrones”, although all those shows gain more viewers when time-shifting is figured in.

In fact, the initial airing of the “Game of Thrones” series finale on HBO, considered the biggest event of the year in television, reached 13.6 million people, Nielsen said.

The first four games of the NBA Finals between Toronto and Golden State all had fewer viewers in the U.S. than Chicago librarian Emma Boettcher’s take-down of Holzhauer.

Close “Jeopardy!” watchers had a hint that June 3 was Holzhauer’s last show because news of his defeat leaked on the Internet before the show aired. “Jeopardy!” is taped well in advance, and show producers knew for weeks when Holzhauer’s defeat would air but kept it secret until the day before.

It’s hard to argue, however, that the leak significantly increased the show’s viewership. Holzhauer was nearing the show’s all-time record for winnings, and two of the episodes that aired the week before his defeat gathered more than 13 million viewers, Nielsen said.

“Jeopardy!” host Alex Trebek punted when asked at Wednesday’s “NHL Awards” in Las Vegas who would win in a match between Holzhauer and all-time money winner Ken Jennings. He noted that another “Jeopardy!” champ, Brad Rutter, had never lost to another human being (Rutter was topped in a competition with an IBM computer).

Four of Holzhauer’s episodes ranked among the 10 most-watched entertainment programs of the year, a list topped by the 18.5 million who tuned in to the series finale of “The Big Bang Theory”. Again, the numbers don’t include people watching on subsequent days.

It was the biggest audience for the show in 14 years, since 18 million people watched on the night that Jennings’ 74-game winning streak was snapped.

“Jeopardy!” is popular even without a dynamic player. The show averaged around 9 million viewers for a week in March before Holzhauer made his debut.

It won’t be the last time viewers see him, however. “Jeopardy!” has an annual tournament of the year’s best players, and it’s hard to imagine him not being there.