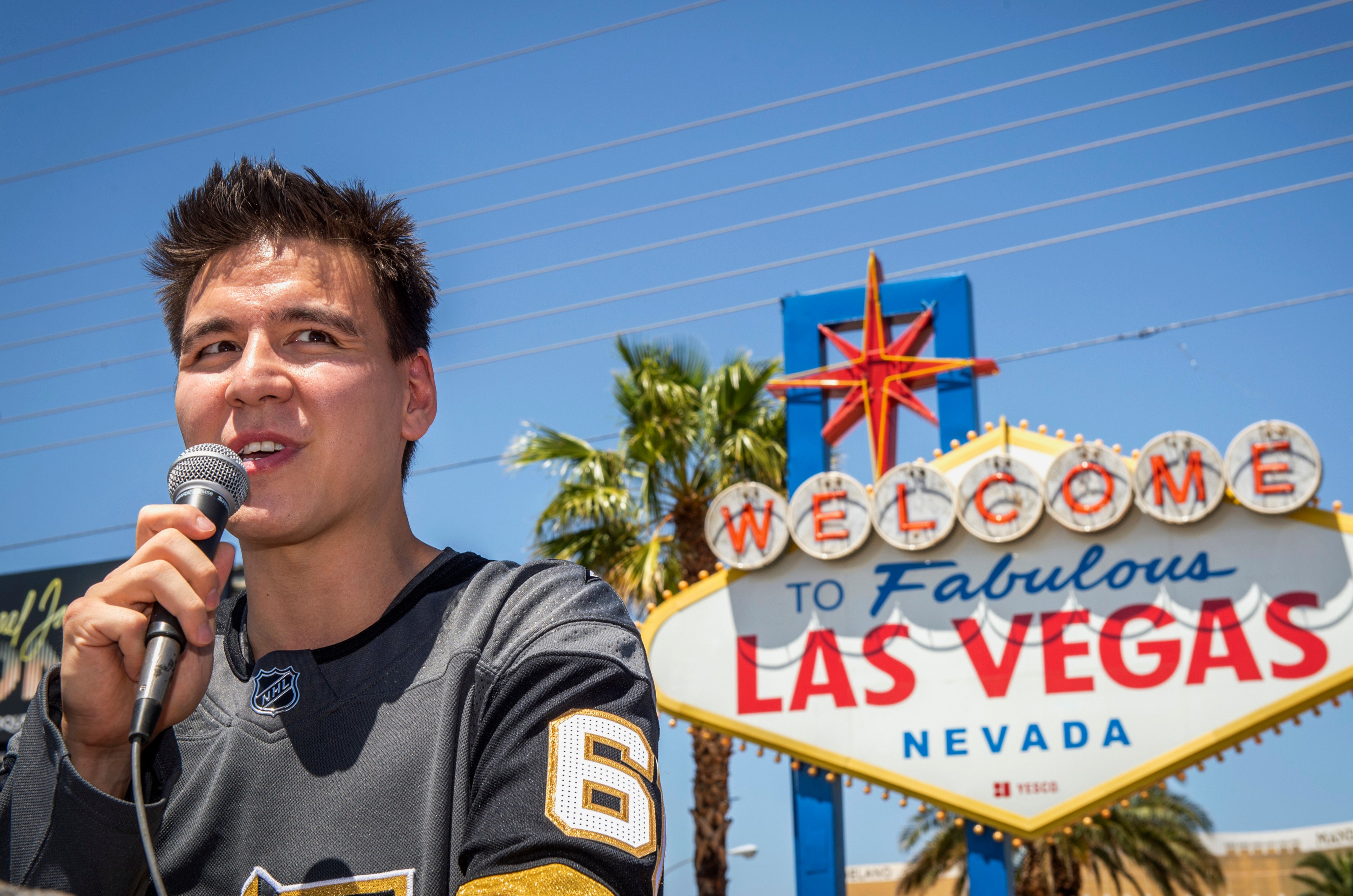 “Jeopardy!” sensation James Holzhauer speaks after being presented with a key to the Las Vegas Strip in front of the Welcome to Fabulous Las Vegas sign in Las Vegas. Image: Las Vegas Review Journal/Caroline Brehman via AP

James Holzhauer, the trivia whiz who dominated “Jeopardy!” this spring, is not invincible after all.

The game show’s 32-time champion lost for the first time in an episode that aired on Monday, June 3, falling short of records for total winnings and longest reign, but still making an argument that he’s the best to ever play television’s most popular game.

The professional sports gambler from Las Vegas ended his run by high-fiving the woman who beat him, Chicago librarian Emma Boettcher.

“I really felt like I had been playing with house money, so I was not too upset to see my run end,” Holzhauer said in an email interview. He said he ran into “a terrific opponent playing flawlessly.”

The streak made Holzhauer a household name and sent ratings soaring, at a time “Jeopardy!” needed a pick-me-up amid host Alex Trebek’s announcement that he had cancer.

Holzhauer nearly doubled the show’s previous record for one-day winnings by earning $131,127 (about P6 million) on his tenth game and he leaves with the 16 highest one-day scores in the show’s history. The game has aired in its current form since 1984.

He combined a savant-like knowledge of the world with a mastery of the buzzer, allowing him to beat opponents to the punch, and adding a gambler’s cold-blooded instinct to make big bets. Often in the show’s first round, he’d quickly pile up as much money as he could, and then bet it all if he landed on a Daily Double that allows him to choose how much money to risk.

In the end, he ran into a woman willing to be as bold as he was. Boettcher went into the show’s final question with a lead over Holzhauer, and bet $20,201 (about P1 million) to ensure he could not beat her.

The show’s final clue was, “The line ‘a great reckoning in a little room’ in ‘As You Like It’ is usually taken to refer to this author’s premature death.”

Both Boettcher and Holzhauer correctly answered, “Who is Christopher Marlowe?”

“I was surprised to see James go down considering how unbeatable he has looked, but it just goes to show how fragile a ‘Jeopardy!’ streak is,” Jennings said. “The end is always just one bad break away.”

Jennings said it was a fantastic run. “I do not know if we will see anything like it again,” he said.

Holzhauer, who rarely buzzed in with wrong answers, said he was proud that he never beat himself. “It took an incredible performance to knock me out,” he added.

Holzhauer’s intimidating dominance became so routine that some longtime “Jeopardy!” watchers groused that it was becoming boring. Holzhauer himself seemed subdued during his last few victories. He said that last week’s episodes were taped immediately after Trebek announced his cancer diagnosis, so that might have affected his mood.

“I do not think I ever tired of playing,” he said. “I greatly enjoyed the whole experience.”

The episode might turn out to be special for the American game show. Fans spread quickly with circulation late this weekend of a video of the show’s final minute. A show representative did not immediately respond to questions about how this material was leaked.

Holzhauer himself offered a cryptic tweet hours before most of the country had seen the episode, saying he “knew I should not have invited Drake to the Jeopardy taping.”

Savvy sports fans would recognize the reference to a supposed curse that the rap star brings to teams he roots for.

Holzhauer developed an active social media presence during his time on the show, a signal that he is likely to be heard from again. He said that “I am fielding some very interesting offers at the moment, and still have a lot of phone calls to return.”

Jennings was already seeing questions about whether “Jeopardy!” would bring him and Holzhauer together for an epic championship match.

“It would be hard to turn down, but I would feel like the old gunslinger being challenged by the young guy in his prime,” he said. “On the right day, I’m sure I could still take him, but it would all be a matter of who got the breaks.” HM/JB