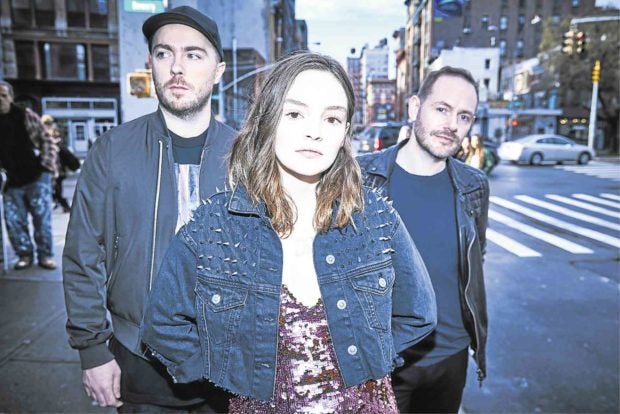 Chvrches, the Scottish trio known for swaddling gleaming synths and electronic beats into a catchy, radio-friendly musical package, is set to return to Manila for the third time and take the stage at Smart Araneta Coliseum on Aug. 13, according to local promoter Ovation Productions.

Composed of lead vocalist Lauren Mayberry and keyboardists Iain Cook and Martin Doherty, Chvrches was formed in 2011 in Glasgow, Scotland.

The group released its first album, “The Bones of What You Believe,” in 2013 and eventually attracted a sizable following—especially within the indie music communities—with such catchy synthpop songs as “Recover” and “The Mother We Share.”

While Chvrches continued to enjoy success with the support of its loyal fanbase, it wasn’t until early this year that the band scored its first Billboard Hot 100 entry with “Here with Me”—in collaboration with DJ-producer Marshmello.

For the group’s Manila show, Chvrches is expected to deliver a setlist that combines older fan favorites and newer songs like “Get Up” “Graffiti” and “My Enemy,” from its latest album “Love is Dead.”

“We go to enough shows ourselves and watch bands we like [to know] what’s a good mix,” Lauren said in a statement. “You have to be aware that yes, it’s a creative process. But you’re there because people love those songs—just give them what they want.” —ALLAN POLICARPIO