Dwayne “The Rock” Johnson did not make a household name for himself by conforming to someone else’s idea of who he should be, an approach he encouraged others to take while accepting a top honor at the MTV Movie & TV Awards.

The actor, producer and former professional wrestler said embracing himself allowed him to carve his own space in the entertainment industry and become one of its biggest stars. He accepted MTV’s generation award with fanfare — running down the stage amidst a blend of hip-hop and Samoan dancers with screens reading “The Rock” in flaming letters behind him — during the show, which was taped Saturday in Santa Monica, California, and aired Monday night. 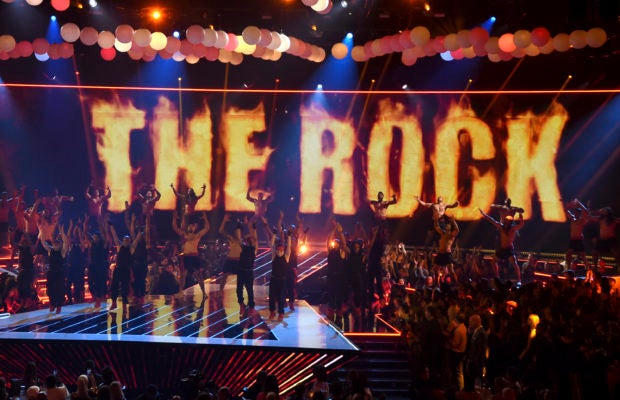 Dancers perform before Dwayne Johnson, also known as The Rock, accepts the generation award at the MTV Movie and TV Awards on Saturday, June 15, 2019. Image: Invision/Chris Pizzello via AP

“The most powerful thing we can be is ourselves,” said Johnson, who is half-black and half-Samoan. He also reminded the audience of the responsibility to reach back for others in the midst of success.

Johnson, 47, was not the only one to use his platform during the show for empowerment. 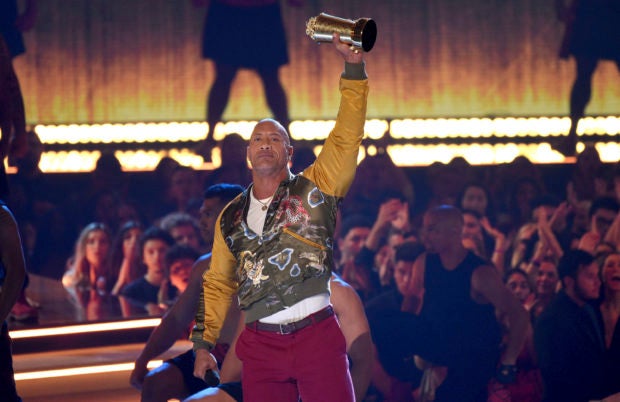 Dwayne Johnson, also known as The Rock, accepts the generation award at the MTV Movie and TV Awards on Saturday, June 15, 2019. Image: Invision/Chris Pizzello via AP

Brie Larson, who won the best fight award for her battle against Minn-Erva (Gemma Chan) in “Captain Marvel”, brought her stunt doubles, Joanna Bennett and Renae Moneymaker, on stage to recognize them for their work.

“They are the living embodiment of Captain Marvel,” Larson said as she stepped aside to let the women give speeches in which they thanked the actress for the rare acknowledgment on an awards show stage.

Inclusivity and celebration seemed to be the themes of the night. The show included a comedic take on a scene from Jordan Peele’s “Us”, featuring host Zachary Levi. Levi reminded everyone to nurture the kid in themselves and keep following their dreams into adulthood. Lizzo and Bazzi kept the crowd on their feet during their lively musical performances of “Juice” and “Paradise”, respectively. 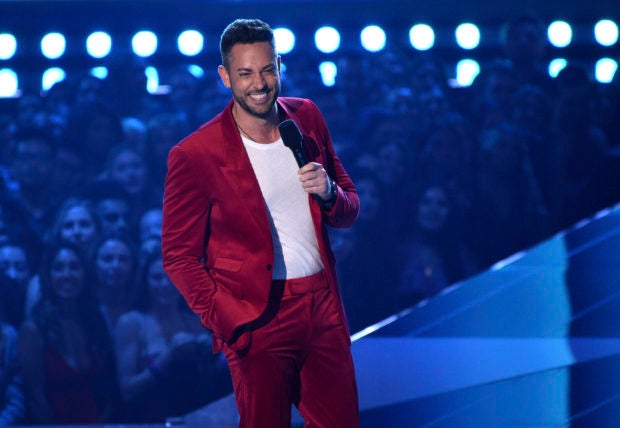 The upbeat nature of the night did not stop some winners from getting serious.

Lana Condor managed to bring thoughtfulness to one of the night’s more amusing awards.

“Kiss who you want to kiss. Love who you want to love, and don’t let anyone tell you otherwise,” she said, accepting the best kiss honor with “To All the Boys I’ve Loved Before” co-star Noah Centineo, who also won for breakthrough performance.

“If I’ve taken anything away from making ‘Schitt’s Creek’, it’s that kindness always wins, and love is best served unconditionally,” he said, wishing everyone a happy pride month.

Jada Pinkett Smith accepted the trailblazer award, presented to her by “Girls Trip” co-star Tiffany Haddish, and assured attendees that each of them are trailblazing by leading the way and fighting for others. 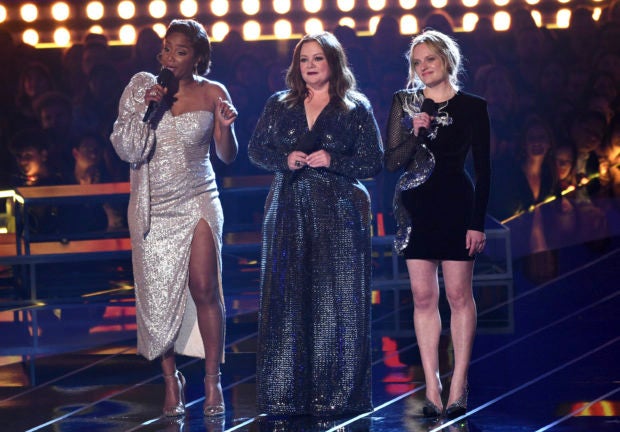 Tiffany Haddish, from left, Melissa McCarthy and Elisabeth Moss introduce a performance by Lizzo at the MTV Movie and TV Awards on Saturday, June 15, 2019. Image: Invision/Chris Pizzello via AP

Women took home several of the night’s biggest awards, including best performance in a show (Elisabeth Moss, “The Handmaid’s Tale”) and in a movie (Lady Gaga, “A Star is Born”). The show features gender-neutral categories.

Sandra Bullock touched the audience during her speech for most frightened performance for “Bird Box”.

The Oscar winner said she made the film for her kids after they asked when she would make a movie for them. Accepting the award from “Wonder Woman” star Gal Gadot, Bullock said that when her kids are old enough to watch the post-apocalyptic thriller, she hopes it will show them the lengths she is willing to go for them. 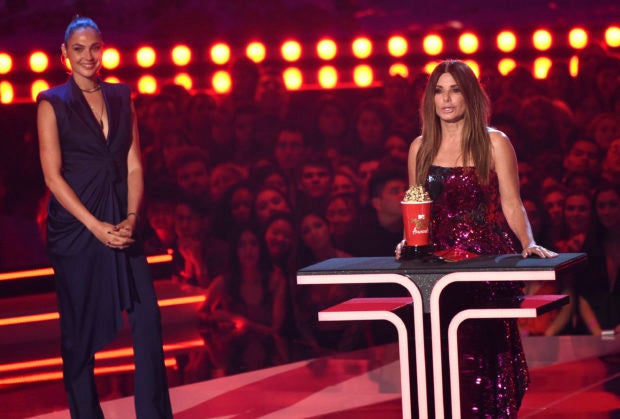 Sandra Bullock accepts the award for most frightened performance for “Bird Box” as presenter Gal Gadox looks on at the MTV Movie and TV Awards on Saturday, June 15, 2019. Image: Invision/Chris Pizzello via AP

Bullock also said she was happy her son could see her accept her award in a room with “real life superheroes” like Wonder Woman and Captain Marvel.

“I’m sure he will notice that they are women, just like his mama,” she said. RGA/NVG