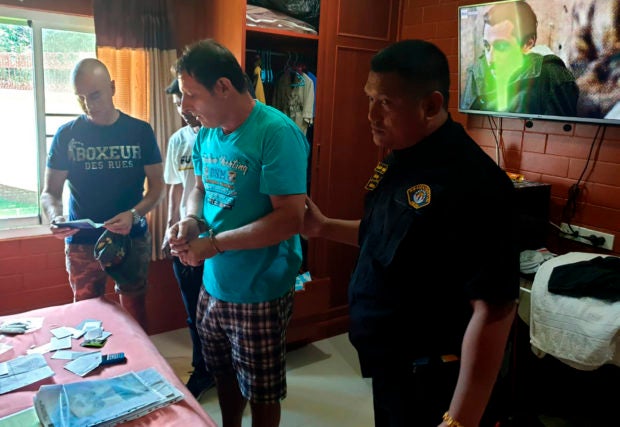 In this June 15, 2019, photo released by Crime Suppression Division, Italian Francesco Galdeli, center, is arrested by Thai police officers at a house in Chonburi. Thai police said they have arrested the Italian man wanted in his home country after fleeing a jail sentence handed down for fraudulently using the name of actor George Clooney to lure people into investing in a bogus clothing company. Image: Crime Suppression Division of Thailand via AP

Thai police said they have arrested an Italian man wanted in his home country after he fled a jail sentence handed down for fraudulently using the name of actor George Clooney to lure people into investing in a bogus clothing company.

Thailand’s Crime Suppression Division said in a statement that Francesco Galdeli, 58, was arrested Saturday near the city of Pattaya on suspicion of staying in the country illegally. Also arrested was Vanja Goffi, 45, on suspicion of overstaying her visa.

Interpol notice had been issued for Galdeli and he was arrested at an address provided by Italian authorities, Thai authorities said in their statement Sunday.

It was not immediately clear if the two had a lawyer.

Galdeli was sentenced by a Milan court in 2010 to more than eight years in jail after he was found guilty of impersonating Clooney to trick investors, police said.

Galdeli had lived in Thailand for around seven years, police said. CC