'We made a 6-hour film' — Douglas MacKinnon | Inquirer Entertainment

‘Good Omens’ director Douglas MacKinnon: ‘We made a 6-hour film’ 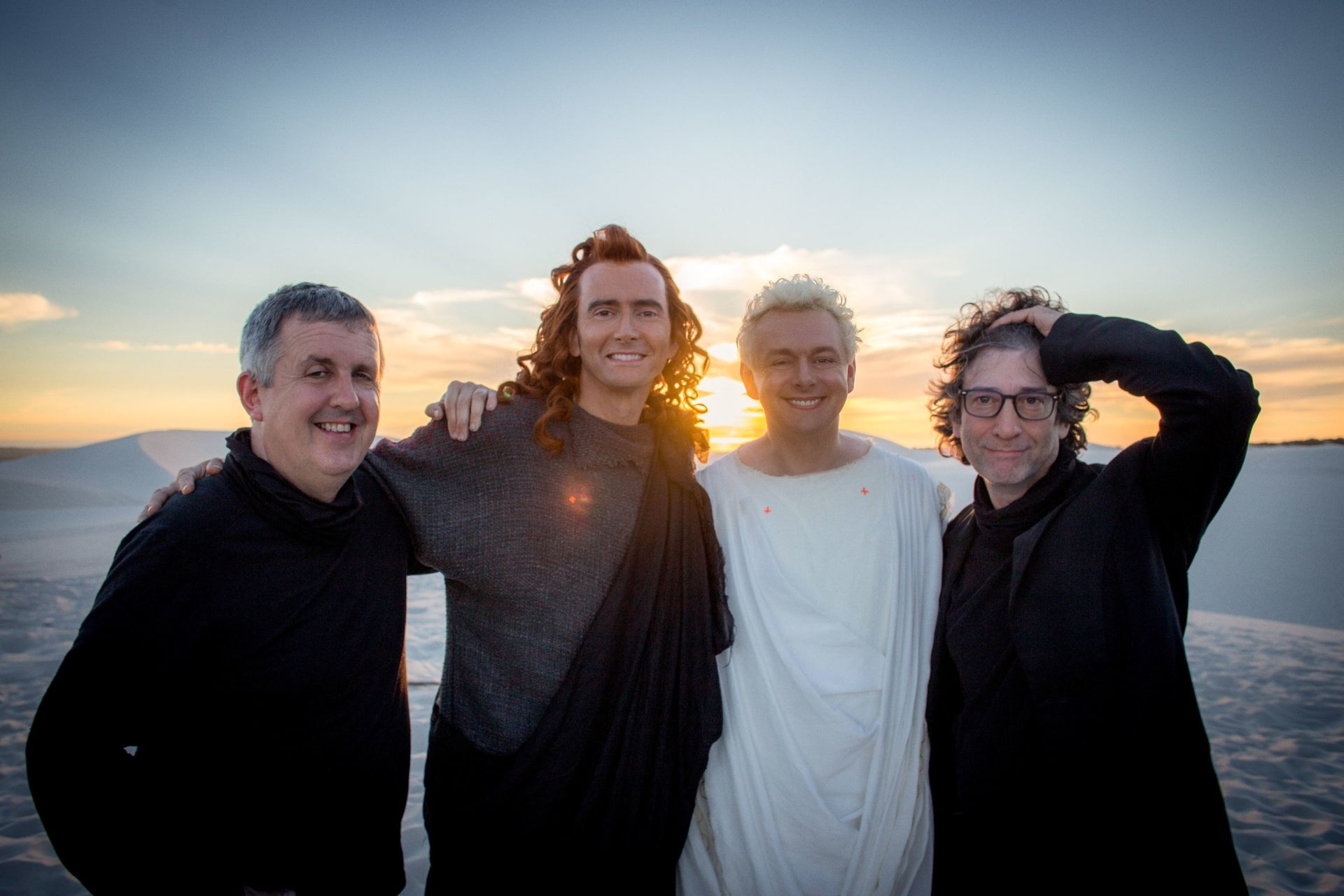 In an interview with AFP Relaxnews, the Scottish director revealed how the unique series based on the work by Neil Gaiman and Terry Pratchett took shape and why the small screen version of the story that moves from the Garden of Eden to Roman Britain and 1960s Soho should not be called an “adaptation.”

Neil Gaiman, the co-author, said he wrote the script right after Terry Pratchett, the other co-author, passed away. What was your initial reaction when you first read the script?

I first got the script for “Good Omens” on my son’s 18th birthday in the evening. I knew about the project, it was huge. I immediately said, “Well it is my son’s 18th birthday so I cannot read it tonight.” The executive producer said, “Could you read the first ten pages or something just to give us an indication,” and so reluctantly I started reading. An hour later, I was finishing the script and emailing her, “This is mine, everybody stand back. Please let me do it.”

You have directed several episodes of “Doctor Who”, and you won an Emmy Award for the “Sherlock” episode “The Abominable Bride”. Why did you decide to direct the whole series this time?

The decision to direct the whole series was partly to do with Neil Gaiman because he had obviously corrected and written all the scripts. Even when I did not have the job I said to him, “I really think you need one director to do this because it is a six-hour movie you have got here, not six different episodes. You need somebody to commit to that.” I responded, “Whoever does it will be mad because it is a crazy endeavor to take on a project of this size.”

Adapting a well-loved book can be tricky without disappointing some fans. What differences can fans expect between the book and the series?

Neil and I have been having a conversation about what we did with “Good Omens” and we are not sure the word “adaptation” is the right one because we think we have actually just done the book. We think the six-hour film is actually pretty much the whole book. There are some things that are not quite there but there are also things that are new so it is kind of like “Good Omens+”.

We have Jon Hamm as archangel Gabriel. He is not really in the book so he has been added in. And then we have got a half hour in episode 3 that explores the relationship between Aziraphale, Michael Sheen and David Tennant’s character throughout the ages, from the beginning of the garden of Eden all the way through the crucifixion and ending up in Soho in the 1960s.

There was a survey done by the BBC a few years ago called “The Top 100 Books in the English language” and “Good Omens” was the only one that had not been made for television or film. And I think it is because it could not have been done before because it needs six hours to tell the story. Terry Gilliam tried to get it off the ground and turn it into a film. He actually watched it with us last night and said, “It was such a relief not to have to worry about trying to cram it into two hours because it has so much in it.” I hope the fans will enjoy the fact that we have been really faithful to the book but we translated it rather than adapted it.

Apparently one of Terry Pratchett’s dying wishes was for the book to be adapted into a series. How did you manage to remain as faithful as possible to the story and to Terry?

I think Terry Pratchett for me, has always been present in spirit, which is interesting for somebody who was an atheist. He did not believe in heaven and hell, neither do I and yet we felt Terry there all the time. After I read the script properly and got to know the book better than Neil Gaiman, at times when we were filming, I would reread the relevant part of the book and there would be a certain line or a moment. I would say to Neil, “You have not put it in the script” and he went, “Would you like that?” and I said “I really love that part so can we put it back in again?”

So in a way I became Terry Pratchett’s representative, protecting the book. That is not saying that Neil was not (protecting the book) as well, but it was just a conversational process that we had. Neil said that one of the things he felt all the way through was Terry on his shoulder all the time, slightly moaning, slightly complaining. This might sound odd but for me, I feel like I had a collaboration with Terry Pratchett and Neil Gaiman because the book was beside my monitors every day. We wanted to please this man somehow.

When Neil Gaiman wrote the script, he knew it was out of the BBC’s budget. How did this incredible project happen and what was the impact of Amazon and the BBC teaming up on it?

When Neil starting writing the script, I do not think he really understood the scale of what he was writing in terms of money. He just wrote the thing he wanted to write which is always what you advise writers to do. When he handed the script into BBC, they said, “Oh we cannot afford this on our own, it’s crazy,” so they started looking around.

At the very same time, companies like Netflix and Amazon were starting to make sure they had budgets that fit a worldwide structure rather than individual countries. So that happy coincidence resulted in BBC Studios attracting the cooperation of Amazon. It really is BBC Studios operating almost like an independent company that happened to have the rights for this great work, with Amazon saying, “Yeah, we would love to make that. Here is all the money! Off you go.”

When did the production start and how was it working with all these amazing actors and actresses?

In typically British fashion, we spent 30 years waiting to try to get it off the ground and when we got the “yes” from Amazon and everybody else, we only had two months preparing for a huge series like this. It was just crazy. Partly that had to do with the availabilities of the actors like Frances McDormand and Jon Hamm. Simply put, we just set off and started filming things.

One of the advantages of having just one director is we could actually change the schedule to suit them. We were filming for so long that some of the actors came in the beginning, went away again, made another film somewhere else, came back and finished with us. We were filming for nearly six months so it is a long time for one director to be doing it by any measure. A 120 – 150 days is kind of what you get for doing “Guardians of the Galaxy” or a Bond film, something like that, but that is for two hours or maybe two and a half hours. Whereas we were doing six hours at that time.

Can we expect a season 2?

Besides “Good Omens”, which show do you like at the moment?

There are two or three series that I actually really love. I love “Russian Doll”, I love “Succession”. It is amazing. But the series that I think had the biggest influence on me, and I think if it had not already been recognized as such in the years to come it will be regarded as a marker for all television that involved CGI, is “Legion”. I think it is the most important television series of our time in terms of moving things forward because you have a writer, who is kind of like Neil, who gets what CGI can do in storytelling and does not regard it as being a special thing to show off.

I would have loved to direct “Legion” when it started. I want to direct the show that is the next “Legion.” Maybe that is “Good Omens”. HM/JB