Broadway readies for biggest audience of the year at Tonys

It is only 10 a.m. but Broadway star Alex Brightman is already sweating.

The actor, who plays the delightfully demonic title character in the musical adaptation of “Beetlejuice”, has joined cast members to rehearse the show’s irreverent opening number ahead of Sunday’s Tony Awards. 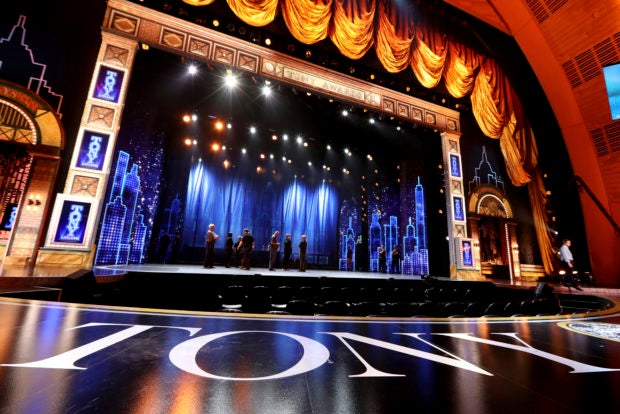 Over and over, Brightman and the actors — all in street clothes — are asked to perform “The Whole Being Dead Thing” as cameras track their movement inside the massive Radio City Music Hall.

Brightman, who earned a Tony nomination in the role, had two shows the day before and has another later on this night, but his infectious energy and ebullience betray no tiredness.

It is his second Tony nod and he learned from the first to pace himself during what he calls “a month of craziness,” culminating in three days of rehearsals. There are endless press and nominee events, and, what he jokes, “a lot of free cold chicken.”

“It all comes down to this,” he said.

Brightman and “Beetlejuice” will be one of several new shows this season strutting their stuff Sunday, including songs from “Ain’t Too Proud – The Life and Times of the Temptations”, ”The Cher Show”, ”Choir Boy”, ”Hadestown”, ”Kiss Me, Kate”, ”Oklahoma!”, ”The Prom” and “Tootsie”.

“Hadestown” singer-songwriter Anaïs Mitchell’s Broadway debut, goes into the telecast with a leading 14 Tony nominations, followed by the jukebox musical “Ain’t Too Proud” built around songs by The Temptations, which received a dozen nominations. The other best musical nominees are the stage adaptations of the hit movies “Tootsie” and “Beetlejuice”, and the giddy, heartwarming “The Prom”.

The best play nominees are the Northern Irish drama “The Ferryman”, from Jez Butterworth; James Graham’s “Ink”, about Rupert Murdoch; Taylor Mac’s Broadway debut, “Gary: A Sequel to Titus Andronicus”; Tarell Alvin McCraney’s “Choir Boy”; and Heidi Schreck’s “What the Constitution Means to Me”, a personal tour of the landmark document at the heart of so many American divisions.

James Corden, host of “The Late Late Show With James Corden” and a Tony winner in his own right, will be the host of the telecast. He previously hosted in 2016, when “Hamilton” was the juggernaut. This year, he does not see a clear favorite emerging.

“It’s a really eclectic mix this year. I have to say it’s a wonderful year because it feels like the field is kind of wide open,” he said. “It feels like no one is like, ‘That’s a lock.’ Of course, the last time I hosted it, it would have been an outrage if ‘Hamilton’ hadn’t won.”

Brightman begins his “Beetlejuice” song in the orchestra seats before joining his fellow actors onstage, amid digital rain, fog, spinning umbrellas and a massive snake or two. The lyrics have been tweaked so he can gently mock some fellow Broadway stars in the hall.

“It doesn’t feel out of the character of our show. No one’s going to take offense because he’s just a demon from hell who has boundary issues,” says Brightman of his character.

Exposure at the Tony Awards — last year’s telecast was seen by 6.32 million people — can provide a key boost to a show’s box-office receipts. “Things like this mean ticket sales. That’s lovely. I just want to continue to do the show,” said Brightman.

In addition to the best play and musical races, there are some intriguing and potentially history-making moments.

Will Heidi Schreck, nominated for best actress in a play and with her “What the Constitution Mean to Me” also up for best play, be the first to win both awards in a single year? Will “Tootsie” songwriter David Yazbek supply the music and lyrics to a second straight Tony Award-winning best musical? (Last year, his “The Band’s Visit” won.)

Will three-time Emmy winner Laurie Metcalf become the first actress to win an acting Tony back-to-back-to-back? And can Jeremy Pope, in his Broadway debut, win two Tonys for his two roles in the shows “Choir Boy” and “Ain’t Too Proud”?