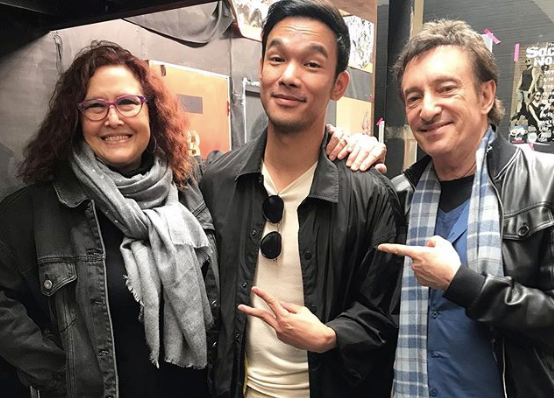 Singer-actor Mark Bautista could not help but fanboy over American singer-songwriters David Pomeranz and Melissa Manchester when he met up with them recently.

Bautista shared a photo of him with the two widely acclaimed singers while at Keynote Rehearsal Studios in Sydney, Australia.

“My heart. Fanboying over these two greats,” Bautista gushed via Instagram on Wednesday, May 29.

My heart..❤️Fanboying over these two greats…My sister’s favorite song and her go to karaoke song is Melissa’s “Looking through the Eyes Of Love” while David’s songs always bring me back to my highschool days…😁 Can’t believe im sharing the same stage with them this friday…😱😱🙏🏼 See you at The State Theatre,Sydney 🇦🇺

😱😱😱😱 so surreal! This is going to be amazing! See you friday Sydney! #DavidPomeranz #MelissaManchester

Bautista shared to his fans that Manchester’s hit “Looking through the Eyes of Love,” which was nominated for the Academy Award for Best Original Song and a Golden Globe in 1980, has always been his sister’s go-to song on the karaoke. Pomeranz’s songs, on the other hand, never fail to take Bautista down memory lane.

“My sister’s favorite song and her go-to karaoke song is Melissa’s ‘Looking through the Eyes Of Love’ while David’s songs always bring me back to my high school days…,” he said.

Bautista is joining Pomeranz and Manchester for a concert at the State Theatre in Sydney this Friday, May 31 — a moment he still finds surreal.

“Can’t believe I’m sharing the same stage with them this Friday,” said Bautista. “See you at The State Theatre, Sydney.”

Mark Bautista on bisexuals wary of coming out: Don’t rush