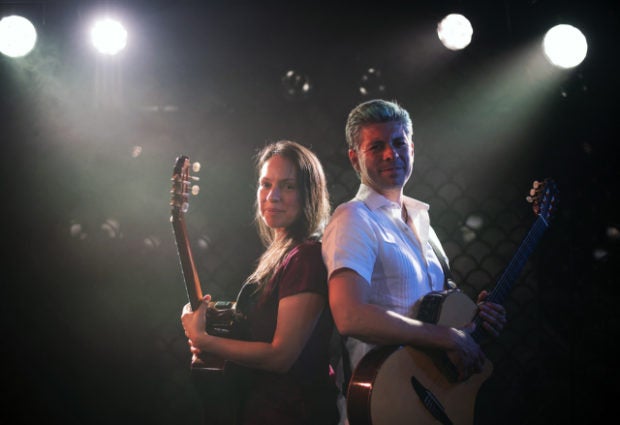 Rodrigo Sanchez (R) and Gabriela Quintero of the Mexican duo Rodrigo y Gabriela pose during a photo session before a concert at the McKittrick Hotel on May 20, 2019 in New York City. Headlines have given little love to guitar heros in recent years, as streaming tastes favor rap and instruments of the greats are celebrated less onstage and more in museums.
But more than a decade after soaring to global fame Rodrigo y Gabriela — the Mexican classical guitar duo that draws inspiration as much from prog and thrash metal as — is still going strong, recently releasing their fifth album “Mettavolution” to rave reviews and embarking on a global tour. Image: AFP/Johannes Eisele

Headlines have given little love to guitar heroes in recent years, as streaming tastes favor rap and instruments of the greats are celebrated less onstage and more in museums.

But more than a decade after soaring to global fame Rodrigo y Gabriela — the Mexican classical guitar duo that draws inspiration as much from prog and thrash metal as flamenco and folk — is still going strong, recently releasing their first studio album in five years, “Mettavolution”, to rave reviews and embarking on a global tour.

Disenchanted by the rock scene in their native Mexico, Rodrigo y Gabriela moved to Europe in the late 1990s, settling in Dublin where they began busking and playing local pubs with their fusion of metal with Latin sounds.

It wasn’t long before the pair — which uses only nylon-stringed acoustic guitars to create their unique, frenetic style heavy on power chords and percussive elements — began winning legions of fans stateside as well as Europe and Latin America.

After the whirlwind success of their eponymous album in 2006 they quickly ascended to a global stage, playing everywhere from top festivals to Barack Obama’s White House.

Their latest work is a more melodic album than past recordings, a sound they achieved by first writing songs complete with lyrics before stripping away the words in a bid to help their fans meditate exclusively to the guitars.

“When we were kids we didn’t know what anxiety was,” said Rodrigo Sanchez backstage before the pair played an intimate show at Manhattan’s McKittrick Hotel, days after rocking New York’s larger Beacon Theatre.

“It wasn’t until literally a few years ago that we started to understand more… about the effects of meditation, things that could actually help to deal with these emotions,” the acoustic rocker with hair dyed electric blue told AFP.

Sanchez said the album evokes the pair’s recent “shift in consciousness” — both in their mid-forties, the metal heads are now vegan and have turned their interests to Buddhism and spiritual evolution — that helped them realize “playing music is not something we just do because we like it.”

“I think it’s a service for people,” Sanchez said. “It’s when we get in touch, really, with our deepest side of ourselves.”

For Gabriela Quintero, “Mettavolution” — a word the duo coined to fuse elements of meditation and evolution, with “metta” being Sanskrit for compassion — is also about processing social anxieties of the contemporary moment, citing climate change, artificial intelligence and nuclear disarmament.

“They’re big concerns, and for us it’s important to speak out,” she said. “Musically, even though we don’t have lyrics, we have the opportunity to express this… because music is the language of emotion.”

“You can express all of that through music, if you’re putting tension on the notes.”

On their latest album the dexterous artists who reinvent the heart-pounding sounds of hard rock for intricate acoustic instrumentals do just that with Pink Floyd’s epic “Echoes” from the psychedelic band’s 1971 album “Meddle”.

Rodrigo y Gabriela are true to the daunting, nearly 20-minute masterpiece while adapting its surreal turns and atmospheric riffs to imbue their own textured sounds, complete with Quintero’s signature percussive knocks on the guitar.

“‘Echoes’ has this meaning of true connection with your own humanity, in order to be able to connect the rest of the world with the rest of their lives,” Quintero told the their Manhattan audience prior to the show.

“So nowadays it’s more relevant than ever, because we’re in that time of this great technology that keeps us so connected — but not so deep inside.”

The “Mettavolution” tour will take the duo — former romantic partners who maintain a friendship — everywhere from Los Angeles to London, along with nine dates in France.

With streaming, Sanchez says “there’s no rules” anymore in the music industry: “It’s different, we can just work and release material every day we want to.”

“Hopefully we’ll find just two or three things that we can focus on, and build up from there and keep playing.” CC