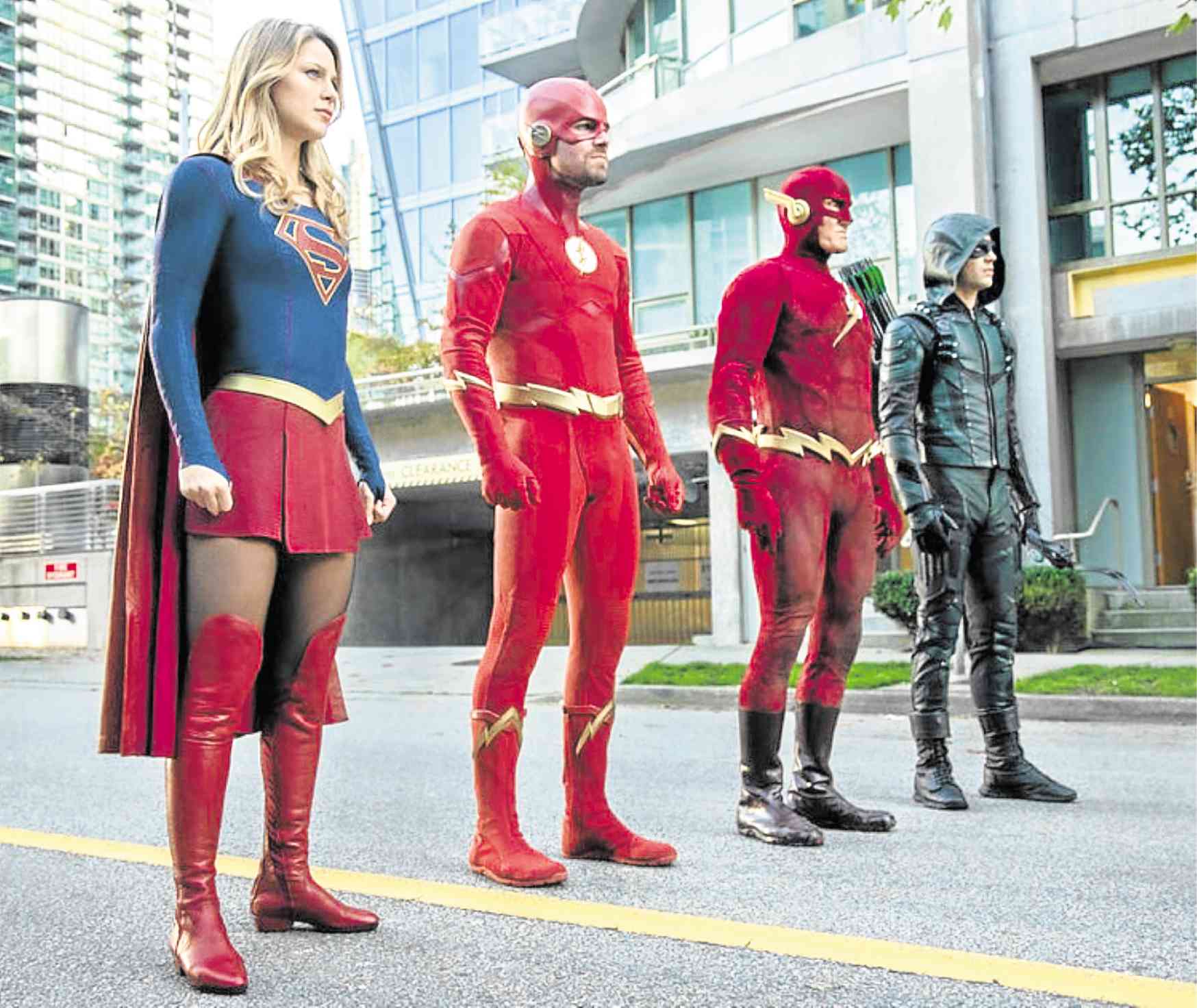 Despite the less epic gathering this time, the event dubbed “Elseworlds” points to a bigger, far more bombastic crossover.

In episodes of “Arrow,” “The Flash” and “Supergirl”—aka the “Arrowverse” TV shows—the superheroes interact with significantly less fireworks than before. It’s a scaled-down encounter with the exclusion of the fourth show, “Legends of Tomorrow.”

But, first things first: “Elseworlds” follows the core heroes, who share an adventure that involves the appearance of an enigmatic cosmic being, the Monitor (LaMonica Garrett).

He gives a powerful object, the Book of Destiny, to Arkham Asylum psychiatrist John Deegan (Jeremy Davies), who is tasked with rewriting reality.

Elsewhere, Oliver Queen, aka Green Arrow (Stephen Amell) wakes up in another reality—as the superfast hero, the Flash, whose secret identity is Barry Allen. The masked vigilante now possesses the other hero’s name, life and extraordinary powers.

Also in a similar predicament is the real Barry (Grant Gustin), who has become an altogether different person—Oliver Queen. With Green Arrow’s combat skills and gritty world, Barry is initially dumbfounded, but still able to get a grasp of his changed reality.

Together, they confirm that they aren’t going insane, and decide to ask the help of Supergirl (Melissa Benoist), who lives in another dimension.

Fortunately for them, she happens to be with her cousin, Superman (Tyler Hoechlin) himself, who offers them a helping hand.

The three episodes offer a decent, if less earthshaking crossover than the first four. With less superheroes to focus on this time, the event is more dedicated to the main ones, although that’s primarily the Arrow-Flash rapport, and everyone else to a lesser degree.

The ’90s live-action Flash (John Wesley Shipp) shows up as well, adding some nostalgic flavor to the somewhat typical proceedings. Shipp was in the present-day “Flash” show as different characters, so it’s fun to finally see him back in his old duds.

Tulloch makes an OK Lois, sharing sparks with Hoechlin in the little time they’re shown, while Rose looks great as both Kate Kane and her masked identity Batwoman—she doesn’t do a lot, but it’s a nice enough debut, and her upcoming show is worth looking forward to. She’s openly lesbian, and her flirty interaction with a flattered but awkward Supergirl is something to see.

So, back to this crossover’s significance: “Elseworlds” is a precursor to “Crisis on Infinite Earths,” the next Arrowverse crossover set for late 2019. It’s the source comic books’ biggest crossover event to date, and while it’s highly doubtful that it will have the grandeur and importance of “Avengers: Endgame,” this upcoming live-action adaptation is ambitious. Longtime fans, whether skeptical or hopeful, will want to see it.

May there be less cutesy moments and more fine-tuned special effects, as it’s going to get grander and more serious.

Tons of characters and universes will collide in momentous and dramatic fashion—we hope.