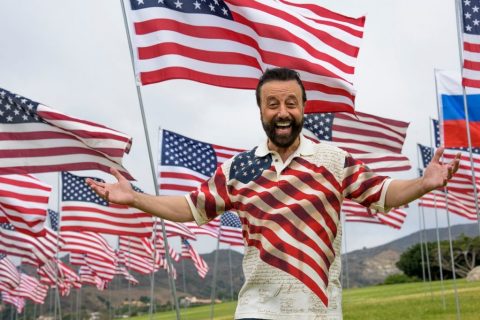 Comedian Yakov Smirnoff stands on the grounds of Pepperdine University where he will be awarded his doctorate from Pepperdine’s Graduate School of Education and Psychology on May 18. Image: Business Wire via AP

LOS ANGELES — Yakov Smirnoff, the comedian known for emigrating from the Soviet Union and skyrocketing to the top of the comedy world in United States in the 1980s, has earned his doctoral degree from Pepperdine’s Graduate School of Education and Psychology. His dissertation and stand up on how laughter sustains human relationships and international diplomacy is both informative and hysterical.

“He’s a [expletive] good joke writer! Yakov Smirnoff is still slingin’ it! He comes to the comedy store. He writes new material and it’s good,” Joe Rogan shared in a statement on The Joe Rogan Experience.

After having reached career milestones as a stand-up, Yakov refused to slow down. With a full schedule of stand-up comedy dates, he managed to find time to go back to school, earning his master’s degree in psychology from the University of Pennsylvania and now his doctorate at Pepperdine not far from his home in Malibu, California.

Yakov also has a home and theater in Branson, Missouri.

“Laughter is your GPS to happiness. The more love, the more laughter,” Yakov said. His research for his dissertation on the “Law of Laughter (LOL)” proves that laughter is like a gas gauge in a car that tells you how much fuel you have.

Yakov also believes that laughter lets you know how much happiness you have in your relationship. “I’ve devoted my life to teaching others how to share love and laughter, and I look forward to sharing my doctoral research on this subject in the coming weeks,” he said. HM/JB