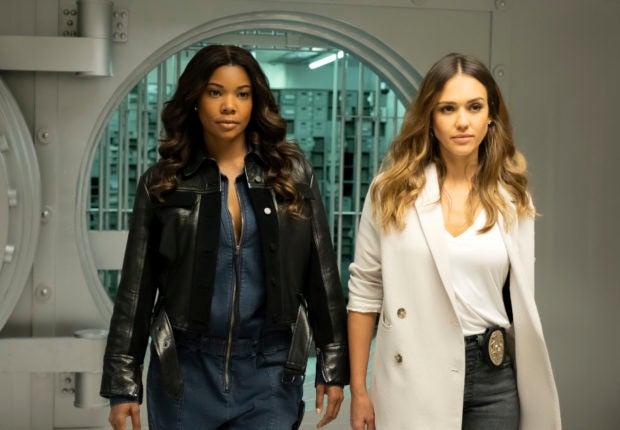 LOS ANGELES — Expanding a comic book’s mythology can bring slighted characters to the forefront. That is also the case with “L.A.’s Finest”, a TV series riff on the 2003 “Bad Boys II” movie in which women, notably women of color, are driving the action.

Gabrielle Union pursued the idea of reprising Syd Burnett, her character from the film who is on a new path as a Los Angeles police detective, with Jessica Alba joining her as detective Nancy McKenna. They are also in charge behind the camera, as executive producers on the series debuting Monday, May 13, on the new Spectrum on-demand platform.

It is a measure, they say, of hard-won confidence in what they can do and in their value, despite entrenched resistance from the entertainment industry. Both are entrepreneurs outside of Hollywood — Alba with her baby and home products company, and Union with a fashion line.

When the two joined to talk about the series, they expanded the discussion to how newcomers such as Spectrum have created opportunities that were being dribbled out by broadcast networks.

Union: [There is] a pleasure in Jessica and I both being executive producers and creating a show where [it is] not one bad-ass woman but two bad-ass women, and two bad-ass women of color who are not only bosses in real life but bosses in front of and behind the camera. And for us to both be executive producers and to have a major say-so of what goes into the show and the experience in making the show, is by far one of the most rewarding and fulfilling things of my career.

Alba: We got to create an environment that we [had not] ever been part of, or we [have not] seen ourselves in Hollywood over our 20 years-plus experience in the business. When [Union] asked me to be part of the show, I said, “[Here is] some table stakes. [I am] breastfeeding my newborn son, I have a 7- and 10-year-old, and I never want to feel weird or awkward about them being part of my life. They will come to set, and that needs to be cool with everyone. And if [it is] not, then this [is not] the show that I should be part of.” We always tried to be as effective and efficient as possible, but then also have a really supportive community where people’s families can come to set.

Alba: When the story originally was being developed for a network, they very much wanted to fit us inside of these buckets or stereotypes, while we wanted to break out of those boundaries. At Spectrum, the women running the network really wanted us just to create the best show, and in that, we got to create cool characters that have rich lives. [They are] flawed. [They are] complicated. They [do not] always agree. [They are] not competitive. They complement each other. But they also have fun and [they are] funny and [they are] witty and [they are] girls that you want to like grab a beer with or a shot of tequila with or cry with. And you just [do not] get to see women in this way.

Union: A lot of networks in the last few years have talked a big game about wanting diversity and inclusion — “We want shows headed by women, we want strong female leads.” And the proof is in the pudding, and that pudding is a little thin. But what you see on cable and streaming is people who actually walk the walk and talk the talk, and they put the money and resources behind developing, creating and actually putting on air shows with not one but two women, and two women of color who are allowed to be full-bodied, multi-dimensional characters. [That has] really never happened in any sort of meaningful way on network television.

Let us entertain you

Alba: If we grandstand and say, “Hey, [we are] in this show and because [we are] women of color, you should tune in, [that is] bull. We [do not] care about that. [You are] tuning in because [it is] cool and it works. The storylines work. [They are] rich. [They are] interesting, [They are] mysterious. The jokes are funny. [They are] not corny or cheesy. And [we are] not relying on any sort of stereotypical thing out there to get by. If [it is] successful or not, we all can look around and I think we can be really proud of what [we have] produced.

Union: If creatives are not getting the same respect — creatively, financially, structurally — [it is] not real advancement. [We are] trying to say, “[I am] not begging for a seat at your table, where my chair is a rickety lawn chair, where you guys have Lazy Boys and [I am] begging for scraps.” Actually, I [do not] even want to be at this table, I [do not] want to be in this house. [We are] going to build our own house, with comfortable chairs and with enough room for everyone, so all of our stories, all of us in a global community, can see ourselves reflected. And all of us are respected in every sense of what that word means. CE/JB