entertainment / Columns
Columns
Only IN Hollywood

Halle Berry gets ready to direct for the first time

LOS ANGELES—At 52, Halle Berry fulfills one of her dreams—direct a feature film for the first time. The actress revealed in our recent interview that she’s preparing to direct an action-drama, “Bruised,” in the East Coast this summer in the United States.

“It’s about a female MMA (mixed martial arts) fighter,” disclosed the Oscar and Golden Globe winner. Halle herself will star in the film, written by Michelle Rosenfarb, as Jackie Justice, who walked out on her son years ago. When the son, Manny, reappears in her life, Jackie has to face her demons, battle a tough opponent in the MMA sport and fight to become the mom the 6-year-old boy deserves.

Halle explained why she chose the story and action genre for her directing debut.“It’s a genre that women so far have not really performed in. It was a story that just gripped and touched me. I understand that underdog story, having a last chance at something in order to survive, and it’s really at the core.

“While it’s a movie about MMA and fighting, it’s really a love story between a mother and a son. My children are the center of my life. So I related to the story on every single level. I’m also in this movie because I fundamentally understand this character. And I’m in the best shape of my life. All of this MMA world is where I’m at right now. The timing just feels right.”

Halle, who has a daughter, Nahla Ariela Aubry, 11 (with model Gabriel Aubry), and a son, Maceo Robert Martinez, 5 (with actor Olivier Martinez), elaborated on why it’s the perfect time to realize her filmmaking ambition.

“Now that the kids are in school most of the time, I realized, OK, I can get back to some of the things that I love and make me happy, that don’t involve my children,” said the stunner, who represented the United States in the 1986 Miss World pageant.

“So that’s why work is back on my plate again. I’ve got exciting things coming up—this movie (‘John Wick 3’), and I’m directing my next movie very soon. It’s got to be something that makes me say, OK, I’m going to leave the kids for a minute to go do something for me.”

“Bruised” shares some things in common with “John Wick 3,” which stars Keanu Reeves and Halle, and was directed by Chad Stahelski.“It’s ironic,” noted the Cleveland, Ohio native. “This script came to me just before I met Chad and got signed up to do ‘John Wick 3.’ Ironically, I have the same producer (Basil Iwanyk) of ‘John Wick’ and Chad is going to be my second unit director and stunt coordinator for ‘Bruised.’ So sometimes, you just know something is meant to be when the universe works it out that way.”

“Directing ‘Bruised’ wasn’t something I set out to do,” Halle admitted. “It sort of called me, actually. When I read the script, it wasn’t written for someone like me. It was written for a 22-year-old Irish Catholic white girl. But I saw how, if we changed the story a little bit, it could actually be more relevant today than that original story.

“So, it was about convincing them that I should play the role and it should be set in the Bronx, in a black ghetto versus where the story was originally set. Once I did that, I was charged with finding who is going to direct it. I met with tons of people. I felt like nobody saw the story that I saw in my head and that I had come up with to convince the producers to let me be the star of the movie. 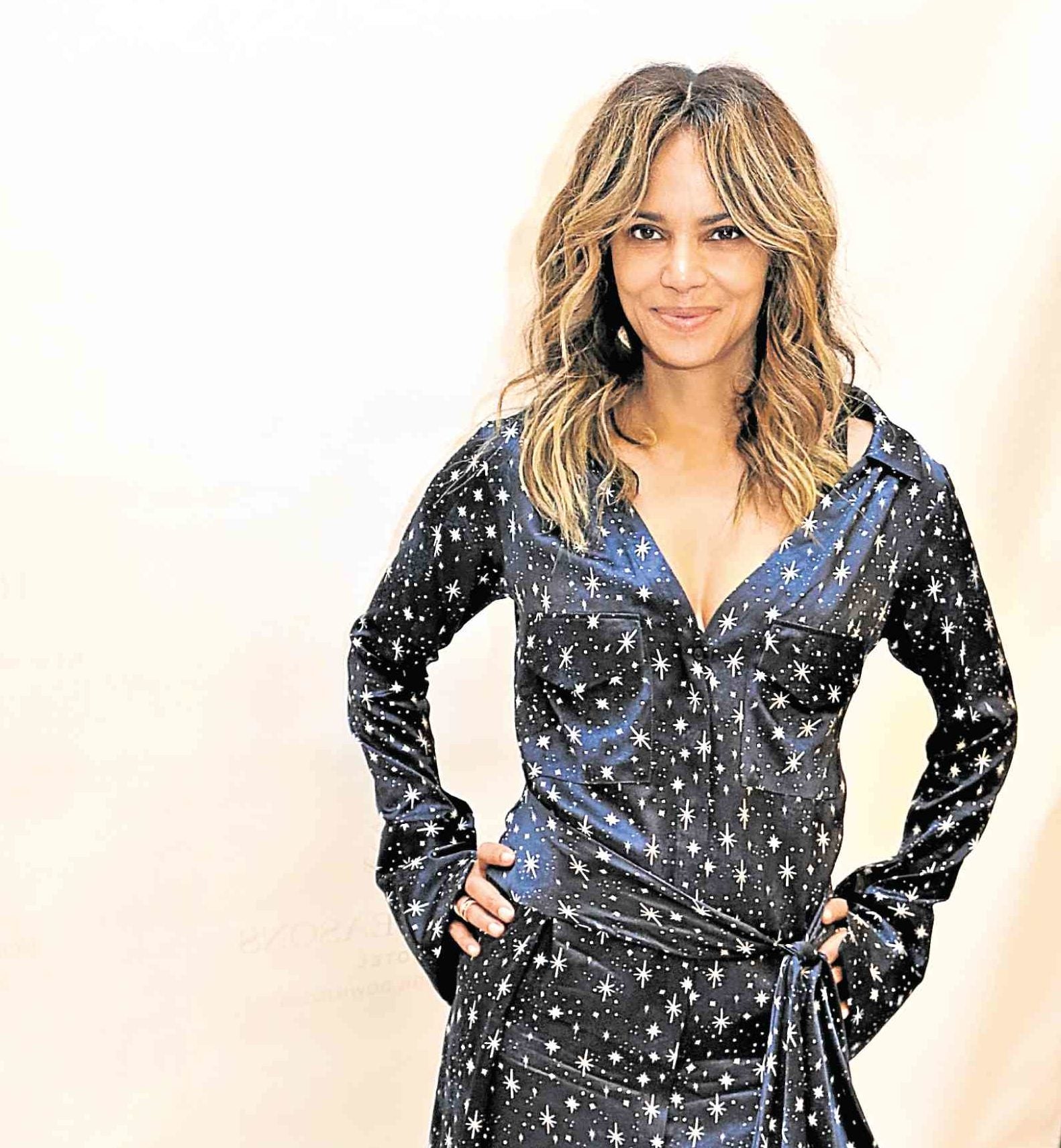 “They finally came to me one day and said, ‘You should do it. You seem to understand the story more than anybody and seem to have the vision. Have you ever thought about that?’

“I said, ‘I’ve thought about it.’ I’ve never been that actor who went to work and just had my headphones on and said, ‘Call me when you’re ready.’ I was always out in all the departments, very curious, nosy and wanting to know what’s going on. I’ve been learning on my own.

“I thought well, OK, because they believe in me. And the more I talked, I realized that I was the director of this. It’s my story, and I know it inside and out.”

As to the actors she will direct and act with, Halle answered, “No casting finalized yet. We sent feelers out. There are people who we’re talking to who are interested and very excited.”

In the meantime, Halle, shared how she is getting ready to plunge into directing. “The process for me right now is because I am actually playing an MMA fighter, I’m in training and working with Chad and his 87eleven (Action Design). Training is a big part of what I’m doing right now.

“We’re in preproduction, so it’s about getting our script finalized, working with my production designer, figuring out where we’re going to shoot in the Bronx or in Jersey.

“We’re going to have the best situation to bring this world to life. I made my sizzle reel. I keep making mood board after mood board, putting all the images together in my mind so when we do get our crew together, I have tons of material to share with them. So they can understand the vision that I have in my mind.

“I’ve been talking with composers, friends of mine. I see the movie having a hardcore rap soundtrack. I have so many friends in the rap world. I’m probably going to call in on my chips on this one and get all my friends’ help.”

Asked which directors have been guiding or inspiring her, Halle replied, “Warren Beatty, a friend of mine, helps me whenever I have a question. When someone’s been around that long and has done as much as he has, Warren is always one of my first calls when I have a question about things.

“I worked with Susanne Bier. Being a woman, she has her own take on the industry, how she has survived it and navigated her way. So Susanne always has great advice. I loved working with her.

“Marc Forster is also a friend of mine who helps me. David O. Russell is someone I look up to as a filmmaker. I very much connect to and appreciate his style. I could keep going on, but that’s good (laughs).”

As for the bad directors who made her realize what to avoid in filmmaking, Halle said, “Here’s what I don’t want to do in my directorial debut. I got this somewhere, so it must be from watching bad directors whom I’ve worked with. People who aren’t able to be collaborative and listen to the people that they hire to do their respective jobs—I don’t think they make the best directors.

“Because in order to direct, what I’m learning so far is, the big part of the job is how you can handle people, how you can navigate situations, how you can be a team player, how you can set the tone.

“You learn that you get more out of your crew and actors if you give them space to be (what they’re good at). You actually hire people you respect, who you think are right for the jobs, then you let them do their jobs. You let them bring their talent and creativity to the process. You just have to manage that. That’s your job as a director.

“Directors who think they know it all in every department, and start telling actresses how to wear their hair, do themselves a big disservice. So I would say it’s about collaborating and trusting the artists you hire.”