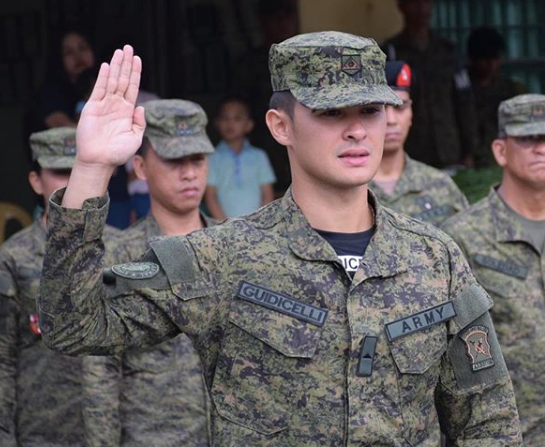 Filipino-Italian actor and model Matteo Guidicelli waxed patriotic when he shared the reason behind his decision to join the Armed Forces of the Philippines as a reservist less than a month after taking his oath.

Guidicelli recently spoke in the closing ceremony of the National Cadet Corps of the Philippines Summer Encampment Training under the Junior High School Commandants Association of the Philippines. The video of his speech was shared on his official YouTube account on May 7.

(A lot of people have been asking me, “Why are you joining the reserve force? Why join the Army?” And I told them, “Why not? I’m Filipino, aren’t I?)

Guidicelli added he has been in show business for around 12 years now. He has been involved in many advocacies and charities, but thought of focusing on other things that really show who he is as a Filipino.

(I told my self, why don’t I focus on other things that are really me? Meaning, who I am as a Filipino. So I said, the best way is to join the Army.)

At first, his girlfriend singer and actress Sarah Geronimo and his parents did not understand why he wanted to join.

(“Why are you joining the Army? Are you going to war?” Now, they have understood that when you’re in the reserve or the Army, it does not necessarily mean you are going to war, there are many other things you can do.)

Some of these things include responding to natural calamities and disasters and distributing relief items, among others, he said. “Kung baga (in a way), these are things we can give back to our country that we love so dearly.”

Guidicelli also remembered just being proud to be a Filipino when he was growing up and studying in the US.

“Maraming tao sa America nagsasabi, ‘Uy Pilipinas, ano may elevator ba dun? May bubong ba dun?’ Sabi ko, ‘Excuse me, we are one of the best countries in the whole entire world.’ And whenever I see this flag, it makes me very very proud to be Filipino, to be Cebuano.”

(Many people in America would say things like, ‘Oh, Philippines, do you have elevators there? Do you have roofs?’ And I tell them, “Excuse me, we are one of the best countries in the whole entire world.”)  /ra

ABS-CBN union leader to ‘Bato’: Try trading places with me