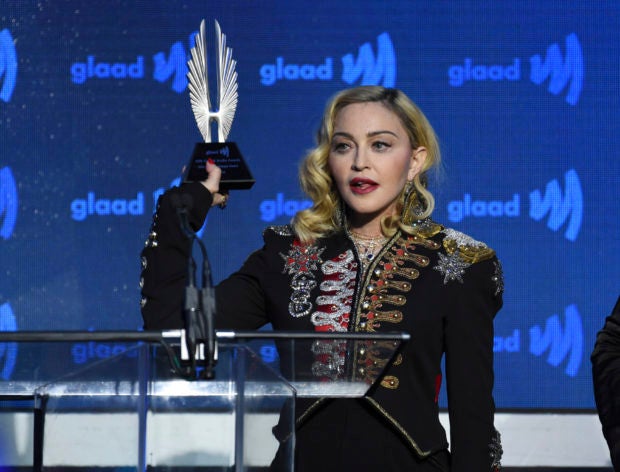 Honoree Madonna accepts the advocate for change award at the 30th annual GLAAD Media Awards at the New York Hilton Midtown on Saturday, May 4, 2019, in New York. Image: AP/Evan Agostini

NEW YORK — Madonna, a pioneer for gay rights, accepted the Advocate for Change Award at the 2019 GLAAD Media Awards with a rousing speech that went from playful to emotional, bringing the audience to its feet.

The 60-year-old pop icon turned heads as she walked to her table at the Hilton Midtown in New York on Saturday night, before taking the stage to celebrate her three decades of advocacy work in the LGBTQ community.

“Why have I always fought for change? That’s a hard question to answer. It’s like trying to explain the importance of reading or the need to love. Growing up I always felt like an outsider, like I didn’t fit in. It wasn’t because I didn’t shave under my armpits, I just didn’t fit in, OK,” she said. “The first gay man I ever met was named Christopher Flynn. He was my ballet teacher in high school and he was the first person that believed in me, that made me feel special as a dancer, as an artist and as a human being. I know this sounds trivial and superficial, but he was the first man to tell me I was beautiful.”

Madonna went on to say Flynn took her to her first gay club in Detroit, and that the evening changed her life.

“For the first time I saw men kissing men, girls dressed like boys, boys wearing hot pants, insane, incredible dancing and a kind of freedom and joy and happiness that I had never seen before,” she said. “I finally felt like I was not alone, that it was OK to be different and to not be like everybody else. And that after all, I was not a freak. I felt at home, and it gave me hope.”

Madonna also said Flynn pushed her to leave Michigan and go to New York to pursue her dreams. And when she arrived in the Big Apple in 1977, she was in awe with all New York had to offer — diversity, creativity — but she also learned about the AIDS epidemic.

“The plague that moved in like a black cloud over New York City and in a blink of an eye,” she said and snapped her fingers, “took out all of my friends.”

“After I lost my best friend and roommate Martin Burgoyne and then Keith Haring — happy birthday Keith — I decided to take up the bull horn and really fight back,” she added.

Madonna, teary-eyed from her seat, received the award from Anderson Cooper, Mykki Blanco and Rosie O’Donnell, who gave a powerful speech about how Madonna helped her become more comfortable in her own skin.

“So here I was — VG, very gay — dating a man and I went to Madonna for advice,” said O’Donnell, who co-starred in 1992’s “A League of Their Own” with the singer. “I was questioning and unsure, my gay life was blossoming but I didn’t quite know what to do. And she told me, ‘Rosie, just follow your heart’ — advice I still follow to this day.”

Despite winning seven Grammys, two Golden Globes and countless other honors, Madonna said getting GLAAD’s Advocate for Change Award has a special place in her heart.

Madonna will release her 14th album, “Madame X”, on June 14. It was inspired from living in Lisbon, Portugal, for the last few years and includes collaborations with Colombian singer Maluma, Migos rapper Quavo, Brazilian singer Anitta, and singer-rapper-songwriter Swae Lee of the duo Rae Sremmurd.

“That was a family affair — the call and response song,” Madonna said. “[David] likes to take more of the credit than the rest of my children. It’s always fun to work with my kids, especially David.” CE/JB

Madonna and Maluma to perform new song at Billboard Awards