Daphne Oseña-Paez on renewal of vows in Cana | Inquirer Entertainment

Nothing was according to plan when Daphne Oseña-Paez and Patrick Paez renewed their vows last March.

Oseña-Paez, a lifestyle TV show host, recounted on Instagram on Tuesday, April 23, how she and her broadcast journalist husband had a “perfectly imperfect” spontaneous wedding among strangers at Cana in Galilee last March 25. They will celebrate 17 years of marriage this year.

It happened while the couple was on a pilgrimage across the Holy Land for 13 days, Oseña-Paez told INQUIRER.net.

The tour included renewal of vows on a morning. “Patrick and I said we wouldn’t — not in a group setting, not during a tour, not without our families,” she said on Instagram. “But that morning it all felt right.”

She told INQUIRER.net that the renewal of vows happened on the fourth day of their trip after seeing a number of sacred sites and enjoying the company of the young priests in their group.

They came to the decision just the night before the group wedding. Oseña-Paez said that she and her husband were the least prepared among the couples, who came with gold rings and lace dresses.

“I just had an old Uniqlo shirt dress and that 20-dollar camel leather sandals from Jericho, Palestine, which I bought the day before. I meant those sandals for my daughter but it’s mine now,” she said.

Their rings were stainless steel and came from a souvenir shop near the church. 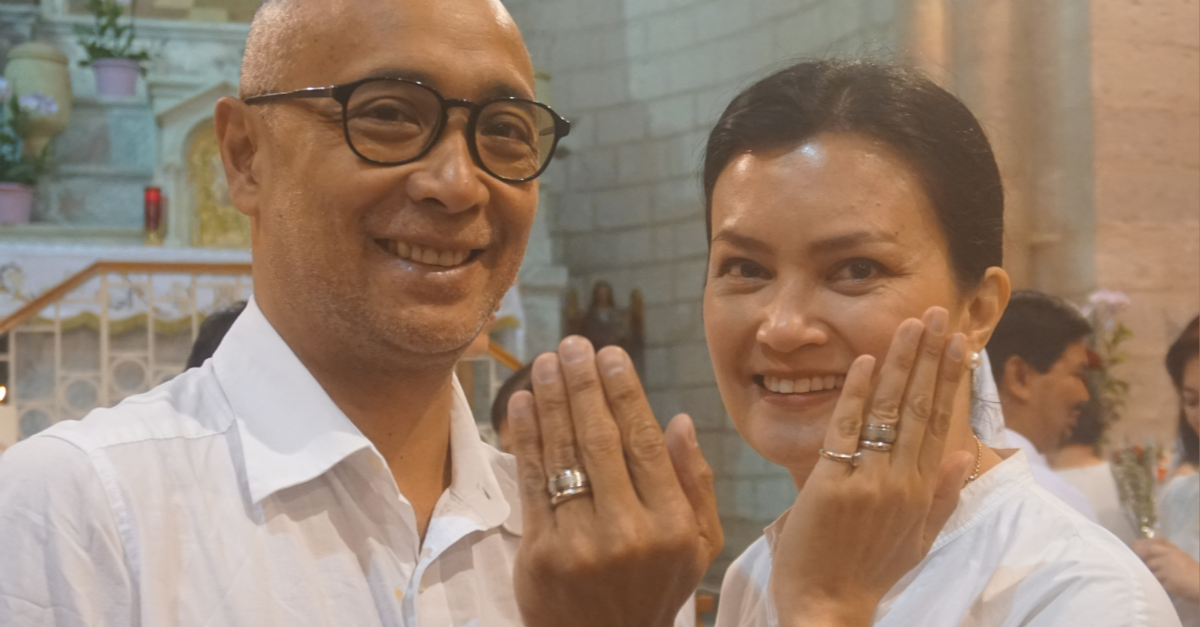 A friend, Ingrid, served as “wedding photographer, bridesmaid, and witness all in one.” Instead of a bouquet, Oseña-Paez held a red carnation from their tour guide.

She could not help but find the humor in their spur-of-the-moment decision. “I laughed a lot because the situation was a little funny. It was like a comedy or rom-com perhaps,” she mused.

“Two under-dressed and unprepared people surrounded by pilgrims from all over and a handful of friends. It was perfectly imperfect,” she wrote on Instagram.

The wedding took place at the Wedding Church at Cana in the town of Kafr Kanna. The church is significant as it commemorates the Wedding at Cana where Jesus performed His first miracle by turning water into wine.

In the end, it seemed like there was divine providence in their wedding among pilgrims.

She felt that their vows had more weight than when they first got married in 2002. “When we said it again this time, I knew what I was talking about because we had been through all that together,” she said.

“It was like our life as a couple, as parents, as true partners, flashed in front of my eyes. And it was wonderful, and tried and tested. I cried a lot at that part.”

She also appreciated that it happened in a group setting. “We enjoyed celebrating all the love with the other couples. Most of them were seniors too. So it was really so cute.”

Oseña-Paez reflected on the fact that it happened on the Feast of the Annunciation, when the Virgin Mary obeyed God in becoming the mother of the Messiah.

“It felt like Patrick and I just obeyed God’s grand plan to get us together in marriage and to renew our vows on such a special day, in a very special place,” she said.

Though she feels like they would not be able to top this wedding, she said the next time they renew their vows, “it would be in a small provincial church near our farm, surrounded by our daughters and our future sons-in-law, and our future grand children.”

“Because as early as now, I am already praying for them. My girls cringe about that. But I believe good spouses have to be prayed for,” she said.

Her advice for a lasting marriage: “Based on this little story, I could say, don’t forget to laugh together, find humor in situations.”

“Go through life together as real partners, keep learning on your own so you have something new to talk about, keep growing as individuals and as a couple.”

She added, “Pray together, pray for each other. It works for us.”  /ra