Latin pop has US grooving more and more in Spanish 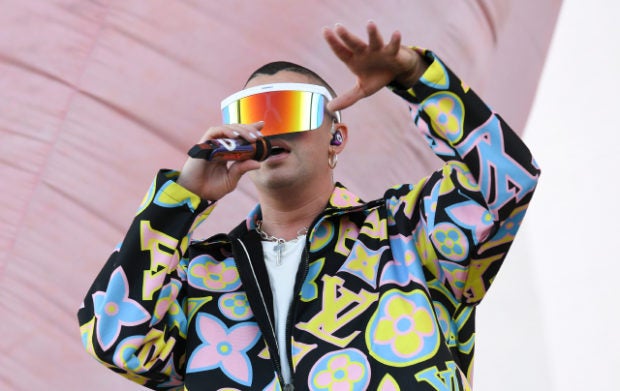 In this file photo taken on April 14, 2019, Puerto Rican singer Bad Bunny performs on stage at the Coachella Valley Music and Arts Festival in Indio, California. – Just two years after the lilting mega-hit “Despacito” captivated the globe, Latin stars are cementing their place in the U.S. mainstream, moving beyond scoring a one-off smash to headline festivals and permeate the charts. Image: Valerie Macon/AFP

Just two years after the lilting mega-hit “Despacito” captivated the globe, Latin stars are cementing their place in the United States mainstream, moving beyond scoring a one-off smash to headline festivals and permeate the charts.

An unprecedented number of Spanish-language acts are performing at this year’s Coachella festival, where a second weekend of shows began Friday — a sure-fire sign of their mounting influence in a country where 41 million people claim Spanish as their mother tongue.

They are not just guests of top-billed acts or appearing on lesser stages — stars like reggaeton revolutionary J Balvin and Puerto Rican trap artist Bad Bunny are winning key time slots on their own.

And they are singing in Spanish, eschewing the “crossover” label often slapped on their A-list predecessors like Ricky Martin, Shakira and Gloria Estefan.

Bad Bunny — the 25-year-old face of Latin trap, a genre that fuses reggaeton with elements of hip hop from the U.S. south — lit up Coachella’s top stage during week one and is set to perform again Sunday.

“I’m very proud of what I represent, of the Latino community that has come far speaking the language they speak,” he said in Spanish to the throng gathered to see him.

“It took 15 years for reggaeton to get to Coachella. We are here!” the boundary-pusher shouted to launch his history-making performance, as the crowd vibed and waved flags repping countries from throughout Latin America.

In another landmark moment, the 33-year-old Balvin will in August headline Chicago’s Lollapalooza festival, becoming the first Spanish-language act to nab one of the coveted spots.

Many experts attribute the US Latin music industry’s rapid growth to a parallel streaming explosion.

According to the Recording Industry Association of America (RIAA), Latin music saw its second consecutive year of double-digit growth stateside in 2018, jumping 18 percent from the year prior to rake in $413 million (around P21.3 billion).

The trends are feeding off each other, according to RIAA chief operations officer Michele Ballantyne: “Any conversation about the Latin music market starts with one word: streaming.”

“Latin music’s transformation from a physical-based business to a streaming-driven one is even faster than the overall US music market’s turnaround,” she said.

Indeed, YouTube said last December that in 2018, eight out of its top 10 most-viewed music videos worldwide belonged to Latino artists, Afro-Latino star Ozuna appearing in four of them.

The Dominican-Puerto Rican recently vowed to continue performing in his native Spanish, telling Billboard that “all the time, it’s ‘English, English, English.'”

“If I have the opportunity of having so many followers, and helping to take Latino artists and culture to the mainstream, I’m not going to selfishly throw it away because I learned English and can ‘cross over.'”

The Latin music boom in the U.S. is noteworthy particularly in light of Donald Trump’s hardline stance on the country’s southern border, with the U.S. president insisting the nation has been overrun by migrants.

“Our generation is fighting for what we want, and that includes music,” Castillo told AFP as Chilean singer Mon Laferte shimmied through her primetime set.

Laferte went on after Los Tucanes de Tijuana — one of Mexico’s most famous narco-ballad bands — got the crowd swaying to its accordion-heavy anthems.

“When they went on, I got so happy, like, ‘Where are all my Mexicans!’ said the 25-year-old Castillo, who is from San Diego.

“It was honestly pretty emotional.”

For balladeer Laferte, 35, the invitation to play on Coachella’s top stage shows that “language is not something that’s separating us anymore.”

Speaking in Spanish to AFP, she called music a “common language that makes distances smaller.”

Laferte said the waves of negativity against Latinos — some of which can be traced back to Trump statements about immigrants — actually “generates a bigger opposition.”

“There are many people who… embrace us, and are very kind, and want to speak our language,” she said. MKH