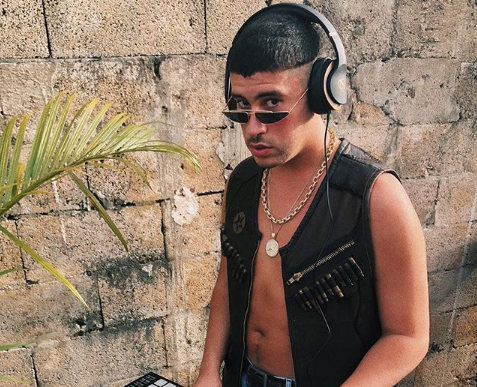 “For every artist is a dream to release an album and that people listen to it,” the Puerto Rican star said in a recent phone interview from a hotel in San Juan, Puerto Rico, while enjoying the pool.

“I think I’ve already released many singles, there are many songs by the rabbit out there, but I think that as an artist it was time to do a full album,” he said, speaking in Spanish.

This year Bad Bunny dominated the Latin music charts with hits like “MIA” with Drake, “El Baño” with Enrique Iglesias, “Amorfoda” and “I Like It”, a song recorded with Cardi B and J Balvin that’s nominated in the Grammys in the Record of the Year category.

For “X 100PRE” Bad Bunny spent the last six months in the studio creating new trap and reggaeton fusions with pop, dance, rock and even disco for titles such as the pop-rock “Tenemos Que Hablar,” the electro-dance “Otra Noche En Miami” and the bachata-touched “La Romana”. The album also includes the previously released singles “MIA” and “Estamos Bien.”

Bad Bunny wants to make people dance, but he also makes space for romance and heartache in songs like “Como Antes,” the track he says was the hardest to produce.

“It was the last song that we finished and the first that we recorded,” he said. “The album has something for everybody; it has romantic songs, songs for dancing, songs for the street, songs for the club and songs to reflect on.”

Beside Drake in “MIA,” he invited Diplo for “200 MPH” and the Dominican urban singer El Alfa for “La Romana.” As a bonus: listen for Ricky Martin’s voice in the chorus of “Caro”.

Bad Bunny tends to include swear words from different Latin American countries in his lyrics, and some can be heard in “X 100PRE” in songs like “¿Quien Tu Eres?” and “Cuando Perriabas.”

“I tried to make it as clean as possible,” he said laughing.

For now, he wants people to see that he is able to create many styles of music. He said he was pleased with the Grammy nomination for “I Like It” but that he’s more concerned with the reaction of fans to his music.

“It obviously makes me happy and cheerful, but to be honest, I didn’t get very excited when I found out… I sincerely don’t work thinking about nominations or awards or money,” he said. “I care about people liking my songs and singing them along in my concerts. Those are the things that thrill me.”

A day before releasing his album, the singer, whose real name is Benito Antonio Martinez Ocasio, was distributing 30,000 gifts for Puerto Rican children through his Foundation Good Bunny, including musical instruments and balls.

His own wish for this Christmas: “That people enjoy my album and my songs. That’s all I want.” MKH