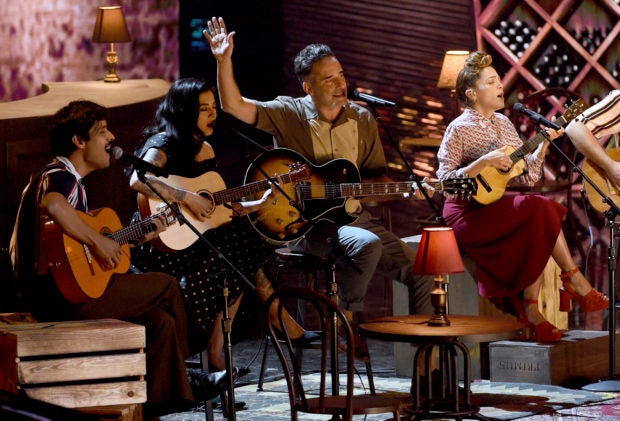 LAS VEGAS (AP) — Rosalia and Jorge Drexler were leading at the Latin Grammys with two trophies each as several stars at the Thursday ceremony promoted messages of unity and justice throughout the night, sometimes alluding to the immigration and violence challenges affecting several countries.

“In these times of crisis, art becomes a medium that reminds us of the urgency of justice and the need to find solutions that invite unity … tolerance and inclusion,” host Ana de la Reguera said before norteño group Calibre 50 performed “Corrido de Juanito”, which tells the story of a man who immigrated to the United States.

The Spanish sensation Rosalía defeated urban music stars including J Balvin and Daddy Yankee and won the Latin Grammy for best urban fusion/performance for “Malamente”. The flamenco and trap hit that earned her five nominations also won the award for the best alternative song.

“This is incredible, it’s a dream,” said Rosalia, who dedicated the award “to all the women in the industry who have taught me that it is possible because thanks to them I’m here,” and her brother.

Marc Anthony, Will Smith and Bad Bunny kicked off the Latin Grammy Awards with a performance of their racy single “Esta Rico”, while the first award of Thursday’s ceremony went to Laura Pausini for best traditional pop vocal album with “Hazte Sentir”.

The trophy for best salsa album was given to Victor Manuelle with “25/7″.

“Daddy, this is for you,” Manuelle said looking up after mentioning his father’s death earlier this year.

Most of the night’s awards were presented during a pre-telecast ceremony. Among those who walked away with trophies were Natalia Lafourcade for best folk album with “Musas (un homenaje al folclore latinoamericano en manos de Los Macorinos), Vol. 2”, Aterciopelados for best alternative album with “Claroscura”, their first album in a decade, and Linda Briceño, who became the first woman to be honored as producer of the year.

“I am very grateful,” Lafourcade said after receiving her trophy. “I want to dedicate this to Mexico, to Latin America, to all our brothers who are arriving to Mexico, who come from many places, that are going through difficult times. Our hearts with you.”

J Balvin walked the red carpet as the evening’s nominations leader. The Colombian reggaeton star topped all nominees with eight nods, including two for record of the year, one for album of the year and another for his hit version of “Mi gente” with Willy William and featuring Beyonce.

Halfway through the night he had earned the trophy for best urban music álbum.

After Thalia revealed Luis Miguel as the winner, the crowd at the MGM Grand Garden Arena had mixed reactions, with some booing and whistling because the star did not pick up his trophy.

“He is not here is with us but … hey, hey, calm down! I’m going to personally deliver it to him,” she said with a wink, which served to appease the audience and generate an ovation. CC

Carlos Santana wants to save the world with music