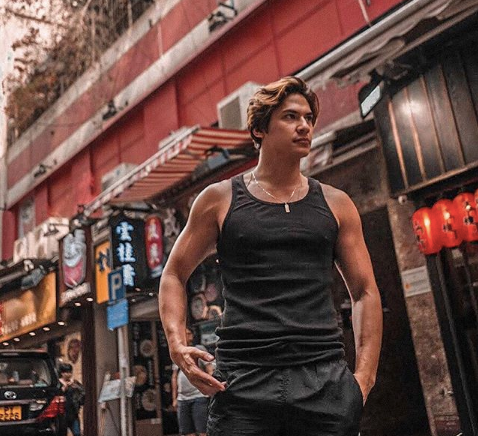 Actor Matthias Rhoads drew flak after he supposedly made an insensitive photo caption referring to the Notre Dame Cathedral.

The historic Catholic cathedral recently grabbed the world’s attention when it caught fire on Monday, April 15 (Tuesday, April 16 in Manila). The fire toppled the spire and burned the roof of the 12th-century building.

Rhoads first posted a photo of him on Instagram flaunting his toned abs. In the caption, he expressed his gratitude for now having 40,000 followers on the photo-sharing app.

4️⃣0️⃣K FOLLOWERS! Maraming salamat para sa suporta ❤️ – In thanks, here is another HIIT workout, swipe left to workout with me! – 5 exercises x 4 cycles = 20 min burn 🔥 1) Burpees 2) Mountain climber side crawl 3) Squat Jumps 4) Jumping Jacks 5) High Knees – TURN ON sound 🔊 Watch the demo, then perform with me when it loops🔔Then swipe to the next, let it loop and perform the next. After the last, go back to the beginning and repeat for a total of 4 times! Let’s get this pandesal! #salamatbros #rhoadstosuccess

However, a netizen on Twitter named Jason R. Arneson (@JasonDaRuler) called out the actor for his original caption that read: “The Norte (sic) Dame burned down today, yet another masterpiece is in the making.”

“Pls tell me this dimwit didn’t just compare his body and instagram followers to the Notre Dame,” the netizen expressed about Rhoads’ caption.

Pls tell me this dimwit didnt just compre his body and instagram followers to the Notre Dame pic.twitter.com/aPAeX49jJ1

Another netizen named John Sherwynn Chan (@JohnSherwynn) also did not like Rhoads’ original caption. “It’s completely insensitive of him to post something like this…,” he said. “Also, who he (sic)?”

It’s completely insensitive of him to post something like this. An architectural marvel and one of the first buildings to ever use flying buttresses just burned down and all he can do is this. Also, who he?

Meanwhile, a Twitter user going by eleanorxx (@eleanorxx6) shared that he/she had an unpleasant conversation with the actor via private messaging on Instagram, and described Rhoads as someone who is “disrespectful, in public and in private.”

In the photos of the conversation which the netizen shared, Rhoads asked him/her why he/she got mad over his post. He went on to say that his caption was only a joke, saying that the Notre Dame “is just a building.”

“I don’t care [about] yours or anyone else who got mad at it,” Rhoads supposedly told the netizen, adding: “So don’t go on my page.”

The netizen also posted an update, sharing he/she got blocked from viewing the actor’s Instagram page.

The actor is known for being part of a viral video titled “Vow” released by a fast-food chain in February 2017. He was also part of the supporting cast of the GMA teleserye “Super Ma’am” starring Marian Rivera.

Rhoads has not spoken up about the issue, as of this writing. /ra

Eyewear for millennials and ‘model alphas’