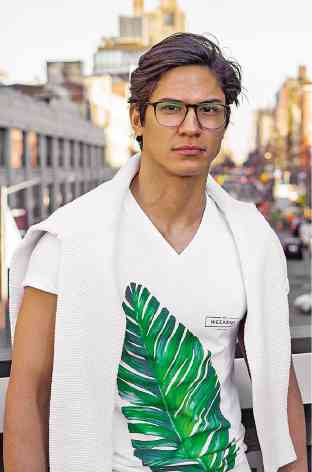 Matthias Rhoads may have had only around 10 seconds of screen time as the groom in that viral Jollibee commercial about a broken-hearted best friend. But that could very well be the “most important 10 seconds” in the 24-year-old model-actor’s budding career so far.

“Yes, there has been more interest after that. I’d like to try acting on television—I’m open to everything. Let us see where I go from here,” the Fil-Am show biz neophyte, who decided to move to the Philippines five months ago, told the Inquirer at a recent press conference for GMA News TV’s reality model search, “The Fiercest of Them All,” in which he is one of the judges.

For the commercial, Matthias had to audition with hundreds of other men and undergo numerous screenings. Asked if he was confident going into it, he said: “Of course I was hoping to get a part, especially after I was told what the ad’s story was going to be.”

“From what I have learned so far, Filipinos are very much into stories about love and heartbreak,” added Matthias, who worked as a graphic designer prior to taking modeling gigs. “I have a degree in advertising, and I felt that the concept would work and could get big.”

Although he did not get the main role in the ad, the exposure Matthias got, he thought, has helped him put his name out there. “My character was not the ‘good guy,’ but exposure is exposure. I’m very thankful for the chance, and I am amazed by what happened,” he said.

Matthias was discovered after participating in last year’s Philippine Independence Day street parade in New York City, where he used to work in the finance industry. Before long, he was on his way to the Philippines.

“I had gotten bored with my previous jobs and I wanted to dive into the arts—my dream. Luckily, the opportunity presented itself,” Matthias said, adding that the biggest challenge so far in working in the country is learning Tagalog, and familiarizing himself with how the local industry operates.

“I have visited the country a couple of times in the past, but I’ve never worked here. I am still looking at how things unfold. None of my family is in the entertainment business, so I have to teach myself and do my best to deliver,” he related.

“There is pressure, but it’s the kind of stress I like. I could have chosen to stay in front of a computer crunching numbers!” he quipped.

“Aside from the contestants’ beauty and personality, I’d like to see passion and professionalism. Fitness and healthy eating are also important to me—I am strict about those. And I don’t want to see anyone smoking on the set,” he said. “I always seek to boost the girls’ morale. But if I see something I don’t like, I will say it.”