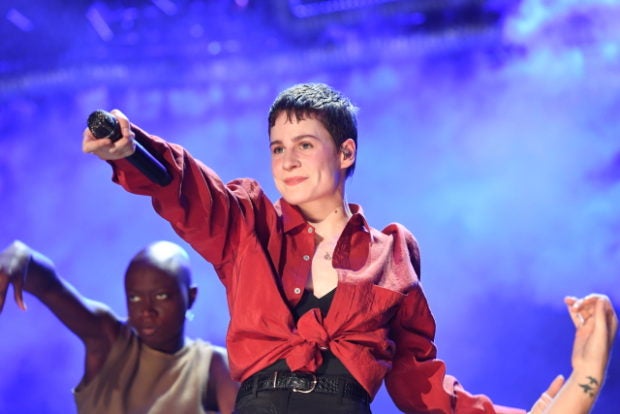 French singer Christine and the Queens performs on stage at the Coachella Valley Music and Arts Festival on April 13, 2019, in Indio, California. Image: AFP/Valerie Macon

Just prior Colombian J Balvin brought a full reggaeton set to the main stage for the first time in Coachella history, while French pop shapeshifter Christine and the Queens won over a new legion of fans with her celebration of gender fluidity at the desert festival in California.

Tame Impala — the group project practically synonymous with its frontman Kevin Parker, who does all of the vocals and instrumentals on the Impala studio tracks — took revelers on an acid-tinged journey through an undulating sonic and visual landscape.

Day two of the festival set against the San Jacinto mountains also saw a number of electro acts take the stage, including the revered but enigmatic Aphex Twin.

The 47-year-old British musician — who has a cult-like following and is acclaimed for his innovations in ambient techno — played days after mesmerizing a sold-out concert in New York, his first performance there in decades.

Virgil Abloh — a DJ who is perhaps now better known as the menswear designer for Louis Vuitton —played the same packed tent shortly before Aphex Twin.

Balvin — the 33-year-old reggaeton rapper who has collaborated with everyone from Beyoncé to Cardi B — played before thousands, some waving flags from throughout Latin America, for the first full reggaeton show ever at Coachella’s main stage.

“It took 15 years for reggaeton to get to Coachella. We are here!” the boundary-pusher shouted to kick off his history-making performance.

He invited guests Rosalia — the Spanish flamenco innovator who performed her own set one day prior — and dancehall star Sean Paul onstage for the eclectic rager, as dancers dressed as trippy Michelin man-esque characters swayed alongside.

In addition to performing a rendition of his hit with Cardi B and Bad Bunny, “I Like It”, Balvin paid tribute to the reggaeton canon with a string of standards, including the 2004 hit “Gasolina” from king of the genre Daddy Yankee.

“Today is a very special day,” he wrote on Instagram earlier Saturday.

“Last year, I performed with Beyoncé; today is our turn, the Latinos and dreamers.”

Puerto Rican Latin trap sensation Bad Bunny will hit the top stage on Sunday, a few slots before pop royalty Ariana Grande will finish off the weekend of shows.

Christine and the Queens — the synth pop act already a sensation across Europe who is beginning to gain traction stateside — electrified a throng with a showcase of sensuality and dynamic gender complete with fireworks, strobe lights and a team of writhing dancers.

“When I introduced myself three years ago I said I was tiny, French and angry,” the 30-year-old star known by the moniker Chris said of her first Coachella performance.

Born Heloise Letissier, Chris, who revels in the theatrics of live performance and its physical challenges, told AFP prior to the set that her debut on one of Coachella’s top stages was “more epic” than her past, smaller show.

Now, she said, “What I’m doing on stage is really about human skin and the sweat.”

“It’s pop but it’s dreaming about a pop show that can be really carnal and quite raw.”

Acknowledging her ideal set time just prior to a highly anticipated show from fast-rising teenage pop star Billie Eilish, Chris laughed that “I don’t know what’s going to happen because the audience is waiting for Billie Eilish I think… maybe three people will be out there for me.”

But judging from the crowd’s reaction to her performance that included a defiant message urging freedom from societal rigors, whether or not they came for her, Chris has found herself a new base.