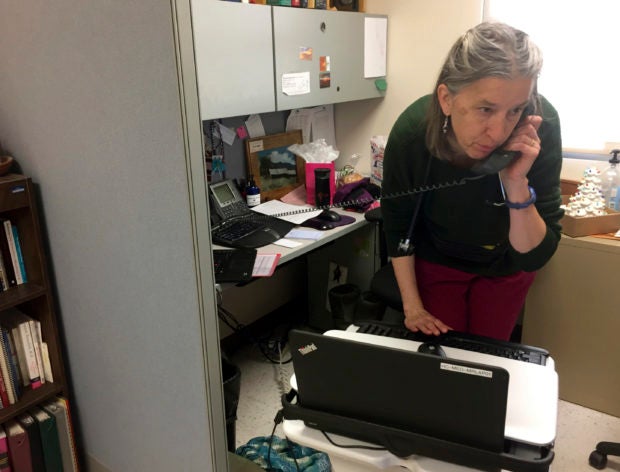 In this Dec. 21, 2016, file photo, family physician Leslie Hayes listens for a fetal heartbeat while attending to a 40-year-old mother, not seen, who is being treated for an addiction to heroin with the anti-craving medication Subutext, at the El Centro Family Health medical clinic in Espanola, N.M. “The Providers”, set to air on the PBS Independent Lens series this week, looks at the challenges three health care workers in rural New Mexico face as they give services to aging patients and those struggling with addiction. Image: AP/Morgan Lee

Northern New Mexico is known for tourist attractions such as artsy Santa Fe, eclectic Taos and the healing dirt of El Santuario de Chimayó. The region’s relaxing spas and skiing options present middle-class and wealthy visitors the opportunity to bask in the allurement of quiet and breathtaking landscapes.

But seldom do these tourists stop in the drive-by towns and villages where largely Hispanic and Native American residents make their home. And there sits another side of northern New Mexico.

A new documentary, set to air on the PBS Independent Lens series this week, explores the world of rural health care amid poverty and a persistent opioid crisis by focusing on these northern New Mexico communities.

“The Providers” looks at the challenges three health care workers in rural New Mexico face as they give services to aging patients and those struggling with addiction to alcohol and opioids.

Through the eyes of physician assistant Matt Probst, family physician Dr. Leslie Hayes and nurse practitioner Chris Ruge, the film shows how the health care providers from El Centro Family Health Center refuse to pass judgment on their patients who are just trying to get to the next day. El Centro is a group of clinics in northern New Mexico that helps people in a region four times as large as Connecticut.

They meet pregnant mothers on heroin, patients whose liver and stomachs have been destroyed by alcohol and aging residents begging for a just a little more dosages of painkillers. Staff shortages make the work overwhelming, so does the worry over funding home visits.

Meanwhile, the young are moving away and high-paying jobs are rare. And now the clinics are seeing a third generation of residents addicted to opioids.

Probst should know. His father struggled with his own addiction to heroin and his sister with methamphetamine. A 16-year-old Probst once sold cocaine to help his family pay the mortgage.

Now, Probst leads dedicated staff members who travel into people’s homes and urge them to come in for routine checkups using tough love but no condemnation.

Filmmakers Laura Green and Anna Moot-Levin, both children of health care providers, said they captured around 350 hours of footage.

“It was important not to create a project of hopelessness,” Green said. That’s why she and Moot-Levin filmed hours of the three providers interacting with patients and reassuring them they controlled their fate, Green said.

Moot-Levin said the pair spent six months looking for the right location to show the challenges of rural health care. They knew immediately northern New Mexico was the spot after learning about Probst and El Centro.

“We found tremendous hope in the relationships, even in bleak circumstances,” Moot-Levin said.

That’s what the pair sought when filming Ruge meeting with a patient named George. The man’s wife killed herself and now he was working to overcome alcoholism. After one visit, George told Ruge he had relapsed.

“Are you mad at me?” George asked.

“No, I’m not mad at you. I’ll never get mad at you,” Ruge said after taking away a bottle. “My job is to try to keep you alive.”

The film is scheduled to begin airing online and on most PBS stations on Monday. CC