Is John Lloyd Cruz on his way for a comeback?

The poster also carries the logo of a local shawarma chain, and the words “ang pagbabalik” (the return).

View this post on Instagram
FEATURED STORIES
ENTERTAINMENT
WATCH: Jane De Leon releases own ‘How You Like That’ dance cover
ENTERTAINMENT
K Brosas silences basher by reporting them to their employer
ENTERTAINMENT
Allan K draws flak for comment on suicide

If thats you i’m happy coz ur my brother😊 welcome to the family!

“If thats you i’m happy coz ur my brother,” Pascual said about the image. He also greeted the mystery man with the words “welcome to the family,” presumably indicating that Cruz might soon be a part of the shawarma chain Pascual is endorsing.

In another post by actress Bea Alonzo today, April 3, she shared a video of the same mystery man, seen from behind. She cheekily captioned the video, “Poy,ikaw ba yan?” a reference to Cruz’s character Popoy in their “One More Chance” movie.

While some fans expressed excitement, others disputed the identity of the mystery man.

One netizen named @kakeycious claimed that it was not Cruz but director Dan Villegas. The filmmaker corrected the netizen’s speculation through a joke: “wuw salamat naman lemelevel hahaha (Wow, thanks for putting me in the same level)!” 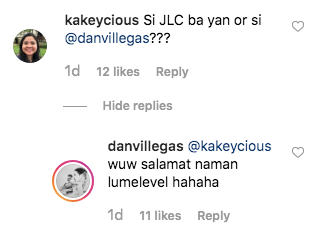 Meanwhile, one @ihyay thought that it was not Cruz nor Villegas, but funny man Empoy Marquez.

A fan page for Alonzo (@beaalonzo.updates) disputed that it cannot be Marquez. “Nawala ba siya para magbalik (Did he go away to need to come back)?” the netizen asked.

Meanwhile, Cruz was spotted recently again, this time agreeing to take photos with some fans at a pares house. This was shared by the Kapamilya Online World Facebook page on Tuesday.

Cruz has been on indefinite leave from ABS-CBN since October 2017. He and his partner sexy actress Ellen Adarna have embraced a simpler life, together with their baby boy named Elias Modesto. JB