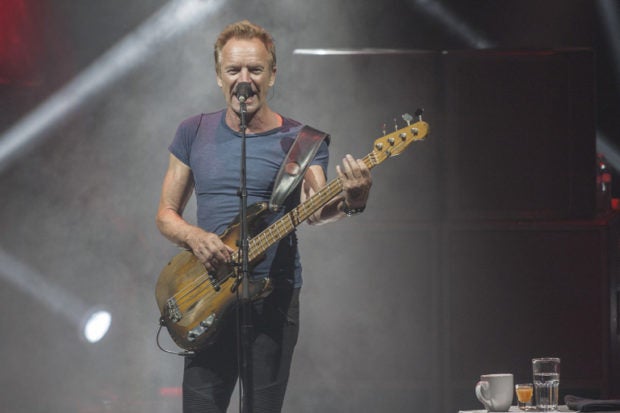 British singer Sting performed during the presentation of his album “57th & 9th” at the Citibanamex Auditorium in Monterrey, Mexico, May 20, 2017. Image: AFP/ Julio Cesar Aguilar via AFP Relaxnews

Due out May 24, “My Songs” sees Sting revisiting 15 of his favorite Police and solo compositions.

“My Songs” will feature contemporary interpretations of major hits like “Every Breath You Take”, “Demolition Man” and “Englishman in New York”.

Recorded in various locations, the album features both existing and newly recorded tracks — updating arrangements based on the way the music has evolved over the years.

In an interview with Billboard, the singer further explained the creative process behind the upcoming album. He revealed that the idea came up after he performed a revisited version of “Brand New Day” in New York during this past New Year’s Eve.

“I’m constantly tinkering and I’m always wanting to make the songs as contemporary as they can possibly be, because I think they are good songs. Sometimes songs are identified by the technology they were recorded with — recording techniques, the sound of synthesizers or the drum sound. They all date a song, so we just want to re-contemporize the stuff,” he noted.

This is not the first time that Sting re-records his music. In 1986, the Police released revisited versions of “Don’t Stand So Close to Me” and “De Do Do Do, De Da Da Da” — which were featured in their 1980 album “Zenyatta Mondatta”.

Sting will hit the road this summer to support his forthcoming album “My Songs”.

On May 19, he will also go on tour in the United Kingdom with Jamaican rapper Shaggy. The pair released their collaborative project “44/876” last April, for which they won a Grammy Award for Best Reggae Album. CE/JB

TAGS: "Englishman in New York", "My Songs", Every Breath You Take, Police, sting