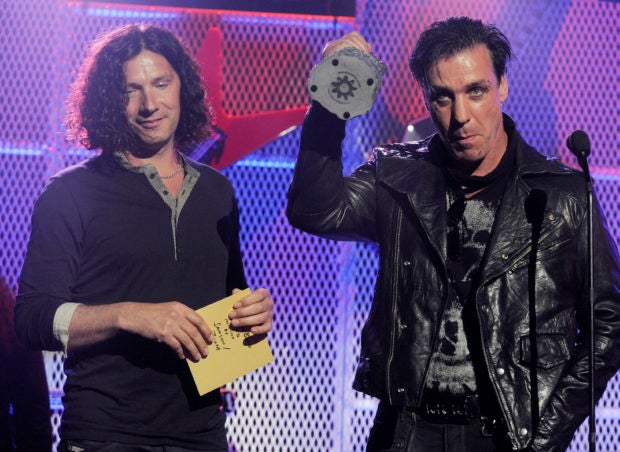 “Whoever misuses the Holocaust for marketing purposes acts in a deplorable and immoral way,” Central Council of Jews in Germany leader Josef Schuster said.

His criticism was echoed by the Israeli Foreign Ministry.

“This Rammstein clip, using the Holocaust for advertisement purposes, is shameful and uncalled for,” ministry spokesman Emmanuel Nahshon tweeted. “We join the many voices calling for its immediate removal.”

For one its previous music videos, Rammstein used clips from Nazi propagandist Leni Riefenstahl’s film about the 1936 Olympics.

The “Deutschland” video features scenes from 2,000 years of German history, presented in the gory style that’s a trademark of the band and its music genre.

Berlin actress Ruby Commey appears as a personification of Germany. In one scene, she appears to wear a Nazi-style uniform. The band members, dressed in the clothes of prisoners at a World War II Nazi concentration camp, are executed while rockets blast off in the background.

The lyrics of “Deutschland” include the line: “Germany, your love is curse and blessing. Germany, I can’t give you my love.”

Karl Freller, a conservative German lawmaker who directs a foundation that manages war memorials in the state of Bavaria, invited the band to visit the site of the Dachau concentration camp, where tens of thousands of people died.

“The suffering and inhumanity of the Holocaust shouldn’t be used for advertising purposes or gimmickry to promote a product, regardless of what it is,” German news agency DPA quoted Freller as saying. CC