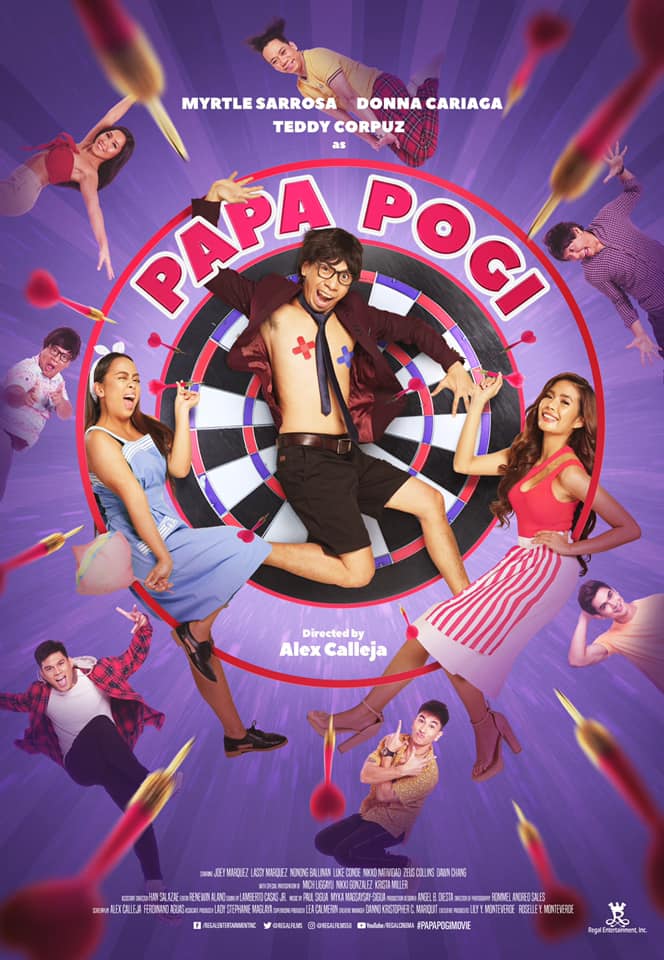 You could not have had a better group of people in this movie ‘Papa Pogi’. Why so?From Director Alex Calleja, the main stars Teddy Corpuz, Myrtle Sarrosa and Donna Cariaga to the supporting cast, they all felt right. No one felt out of place or wrongly casted here.

The main star in ‘Papa Pogi’ Teddy Corpuz has been a comedian, noontime show co-host and musician for years but for some they think he is new to this. However, that misinformed perception is understandable because this is the very first leadrole in a movie for Teddy Corpuz and because of that reason ‘Papa Pogi’ has become his proper introduction to local moviegoers. And ‘Papa Pogi’ could not have been a more perfect movie for him to be its main star. His onscreen portrayal of “Romeo” is so fitting for his comedic skills, tailor made to his personality and so spot-on because as much as the “Papa Pogi” character is a work of fiction, hisperformance is so well done that it becomes so realistic and believable to moviegoers.

After watching ‘Papa Pogi’ Teddy Corpuz is someone I can categorize as a pure comedian with a heart for his craft. This trait about him tells me that he sincerely wants to make people laugh and have a good time. That is why his performance here did not feel forced because it is natural.

Teddy Corpuz is the kind of comedic-actor who could have done well in any era of Pinoy comedy. There is no doubt that “Papa Pogi” is a movie that will legitimize him as a comedic-actor in local movies. Call it a launching movie, a proper introduction to moviegoers, whatever you want to call it. The point here is this, ‘Papa Pogi’ is a movie that will forever be tagged and connected to Teddy Corpuz. He owned the role and made it work.

Myrtle Sarrosa and Donna Cariaga, the two leading ladies of Teddy Corpuz in ‘Papa Pogi’, round up the main cast. Both do well in playing out their respective roles as the two love interests in this period of the life of “Romeo” (Teddy Corpuz).

Myrtle Sarrosa portrays “Helena” who is a more tame, shy, elegant, charming and sweet kind of girl that any guy would find hard not to fall for. Her onscreen character is new in the life of “Romeo” (Teddy Corpuz) but she manages to make an immediate impact in his life by simply being herself.

On the other hand, Donna Cariaga’s onscreen character has known “Romeo” much longer and secretly at first has been wanting to get into a serious relationship with “Romeo” before letting her feelings be known loud and clear to him. She will do what it takes ! She is aggressive, hilarious and shameless ! hahahaha… The two leading ladies portrayed by Myrtle Sarrosa and Donna Cariaga are contrastingly different to each other personality-wise, and the movie pans out to be like a literal “tug of war” between the two ladies as to who can win the heart of “Romeo”.

Alex Calleja as the Director of ‘Papa Pogi’ was the main reason why this movie worked, turned out as well as it did, and did not fail as a comedy movie because there were scenes that were so funny, the humor was modern and in tune to the times. The humor and jokes did not feel dated, corny, or old. ‘Papa Pogi’ for me is definitely a comedy movie for the year 2019.

‘Papa Pogi’ is a modern comedy to the core that will appeal to everyone, young and old. It is a movie for all to laugh, enjoy, and forget their problems. You can have all the right people, but if you do not have the right person to lead them and guide them, then things will fall apart and become a mess. In the case of ‘Papa Pogi’ none of those terrible things happened because the right director was in this movie.

The main cast and supporting cast and everyone else who appeared in this movie were all on the same page. They clearly got along with each other onscreen and offscreen. They got the plot, they had fun filming this movie, and looked very confident in their respective roles whether big or small. It was like “one big happy family” of actors and actresses with a common love for comedy. And, all of these wonderful factors can be discerned in the movie itself.

This is the first movie that Alex Calleja has directed and it is safe to say he has a great future as a Director of movies in the comedy genre. I look forward to more comedy movies directed by him because with Alex Calleja as the Director you are guaranteed high entertainment value. Plus, he actually knows what works in comedy because he himself is a comedian, writer, creative director, creative consultant, radio show host, among others. He has all the qualifications and qualities to excel and succeed as a Director. Without him as the Director for this movie, ‘Papa Pogi’ would not have reached its maximum potential! And, now we have the first pure comedy movie in the year 2019 that lived up to the hype.