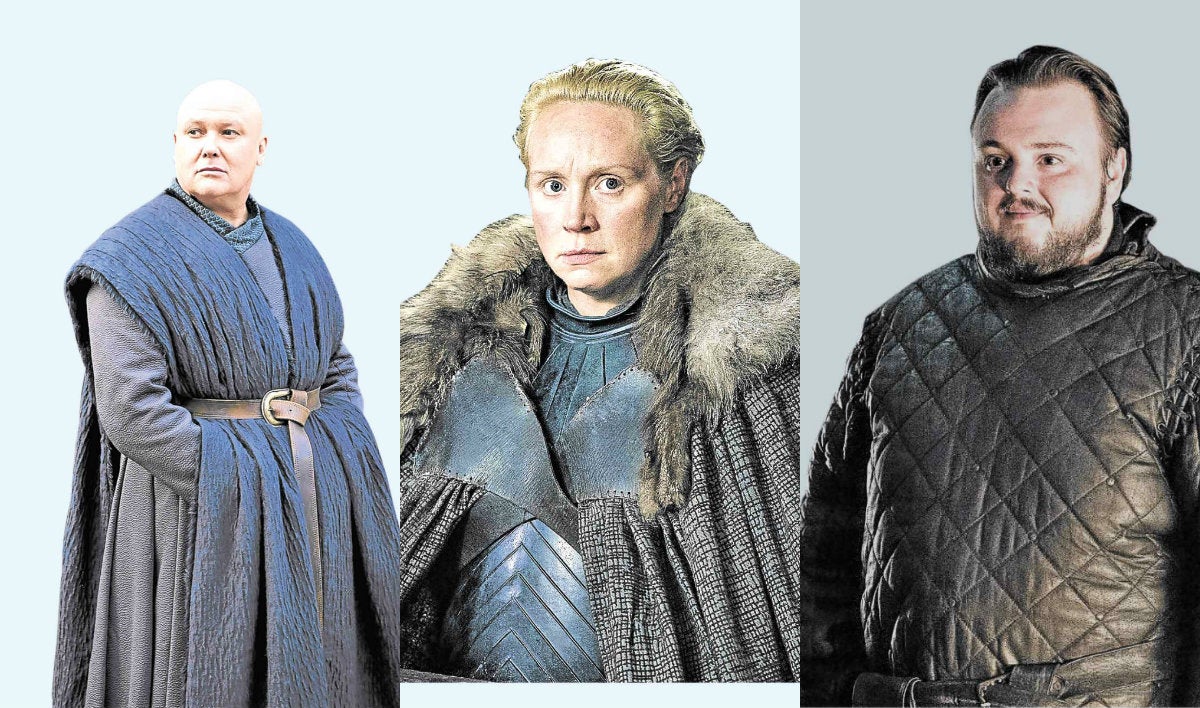 From left: Hill as Lord Varys; Christie as Brienne of Tarth; and Bradley as Samwell Tarly —HBO

(Second of a three-part series)

LOS ANGELES—“I said (to some of my coactors), ‘If I don’t get my sword, something really bad is going to happen,’” Gwendoline Christie cracked with a laugh when asked if there was a prop from “Game of Thrones” that she’d like to take home.

It was February last year when we interviewed the actors in London and visited the sets of HBO’s hit series in Northern Ireland.

At the time—in the dead of winter—the production was in the midst of filming its final season.

As we wrote yesterday, we were sworn to secrecy and signed an agreement that we could not publish our pieces until more than a year later, when “Game of Thrones” is about to premiere Season 8.

Gwendoline, who plays Brienne of Tarth, looking even taller than her 6’3” frame in person, continued, “I discussed this the other day with some of the actors. I said, ‘When are we getting the stuff (laughs)?’ Thank God, this interview is embargoed because when they discover the sword is missing, it’s too late. I want the sword. It has lacerated my hand for years. From all of that work on the brass handle, I really want the sword. 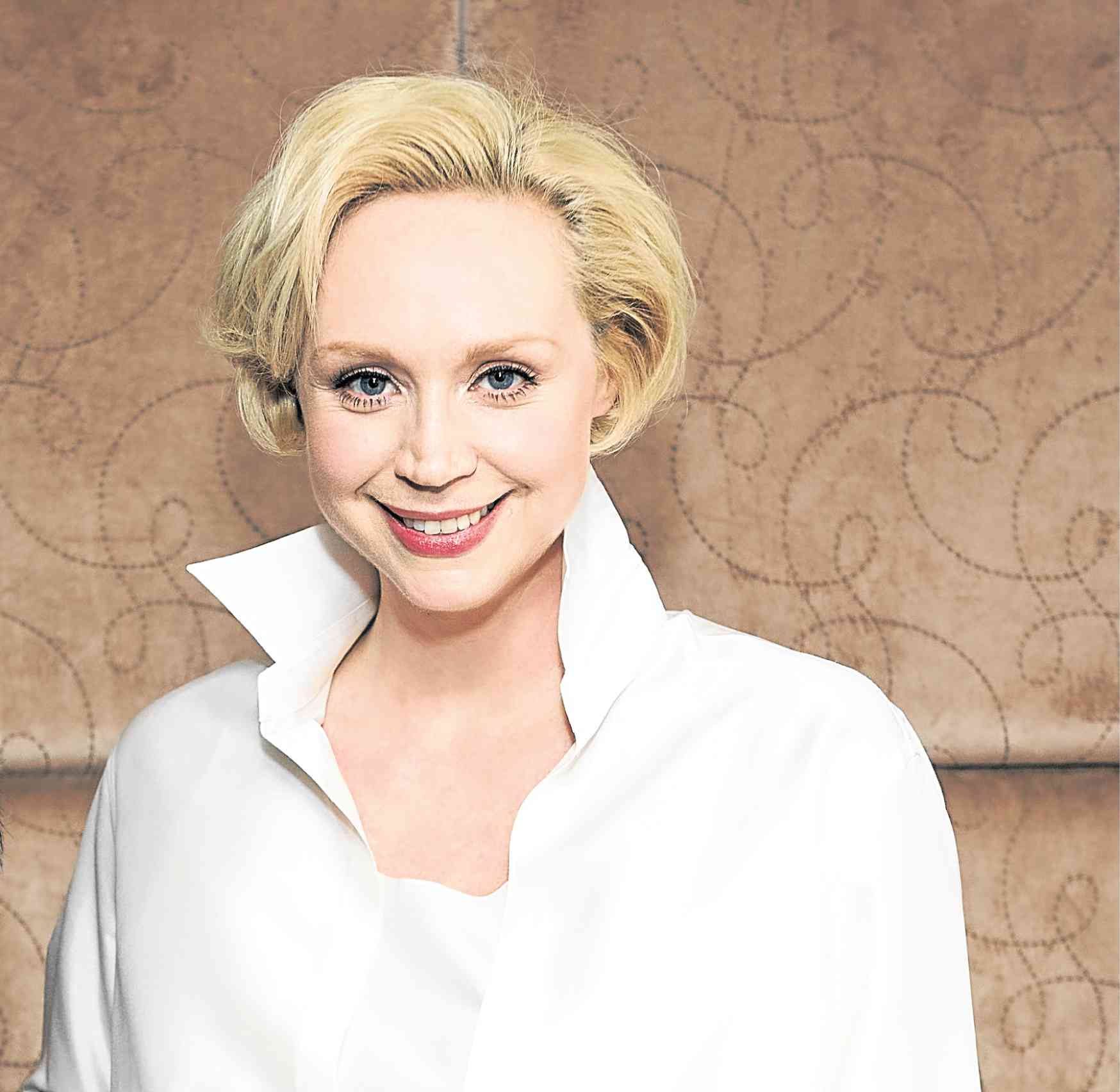 “The armor, I would like to set up in flames. The sword has distorted the muscles in my body from carrying it around for so many years. It’s a beautiful thing, as well.

“Boyd (Rankin), who designed many of the weapons on ‘Game of Thrones,’ spoiled me. Boyd came over one day when I was learning a sword fight in the stunt tent. He said that he had thought about me when he was designing the sword. But I have a sneaking suspicion that Boyd might be an old flatterer (laughs).”

“How does it end? That’s the most common one,” Jacob Anderson (Grey Worm) replied about the most common questions he is asked by fans. “And the other one is, for me, ‘When do you die?’”

Since the actor portrays the Unsullied warrior, who was castrated, Jacob is hounded by a particular set of questions by both fans and reporters. “They also ask me very personal questions about my anatomy (his genitalia).”

As for the prop that he covets, Jacob admitted, “Last year, I got this crest on my tunic, which shows the three dragons eating each other. That’s the one thing that I want to take. I don’t want anything big because you’ve got to put it in the flat. Also, when people come in, they might be like, oh he’s a bit full of himself.

“I feel like it’s been such a journey. I’ve been on the show for five years. And particularly with Emilia (Clarke) and Nathalie (Emmanuel), we’ve been a little team. I do feel a sense of pride about being a part of that group. I love Dany as a character, her journey and all the complexities in it.” 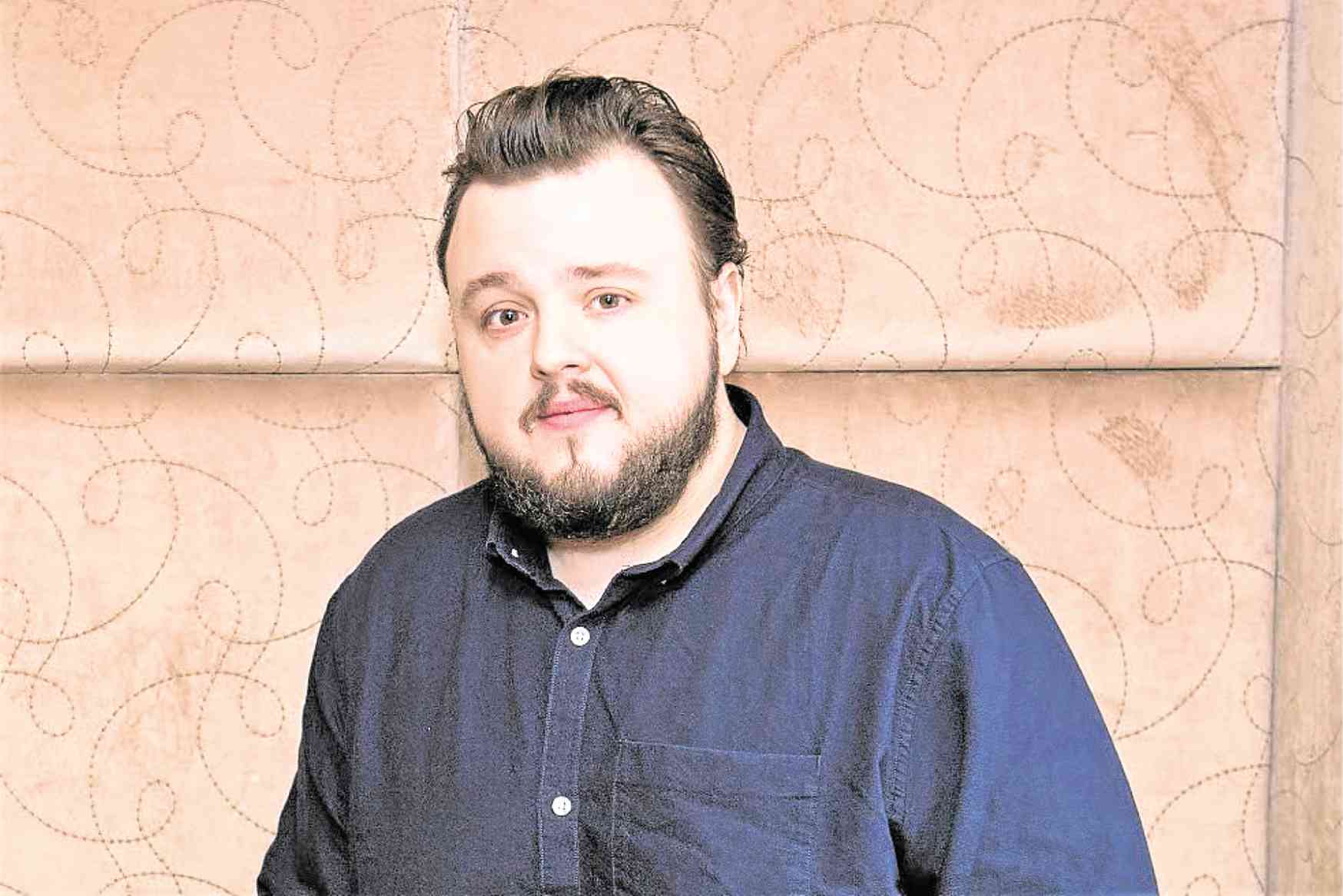 “I had read the script before I went in,” John Bradley (Samwell Tarly) said about the show’s memorable final read-through. “I know that some people didn’t. Kit (Harington) wanted it to be as much of a surprise for him as it was for everybody else. He was deeply emotionally affected by it.

“I was still emotionally affected. You can read to yourself at home, and you can have that quite intimate relationship with it when it’s two inches in front of your face. But it is only when you hear the right voices saying the right words, that you somehow get a sense of what it’s going to be like.

“So, even reading it and knowing what it’s going to be narratively, there are still surprises. That’s the thing I’ve always found about the ‘Game of Thrones’ scripts.

“You read them sometimes, and it seems like on paper, they’re ‘unfilmable.’ Bryan Cogman, one of our writers and producers, is the one who reads all the stage direction. You think, a whole team playing at the very top of their game has to get together and make these words on paper a visual, physical reality.

“I’m foolish with it because I know a precedent’s been set with all that great work that’s come before. But every year, I still think they’ve overreached themselves and that there’s no way they can pull this off. And every year, they pull it off.

“So even if you know what’s in the script, that journey from reading it in the table read to the screen, you’re still going to be blown away. You’re still going to get shocked by the visual sight of it, even if you know how the story’s going to play out. So Kit decided not to read it, and I did decide to read it before, but it’s still a joyful experience hearing it in that environment.” 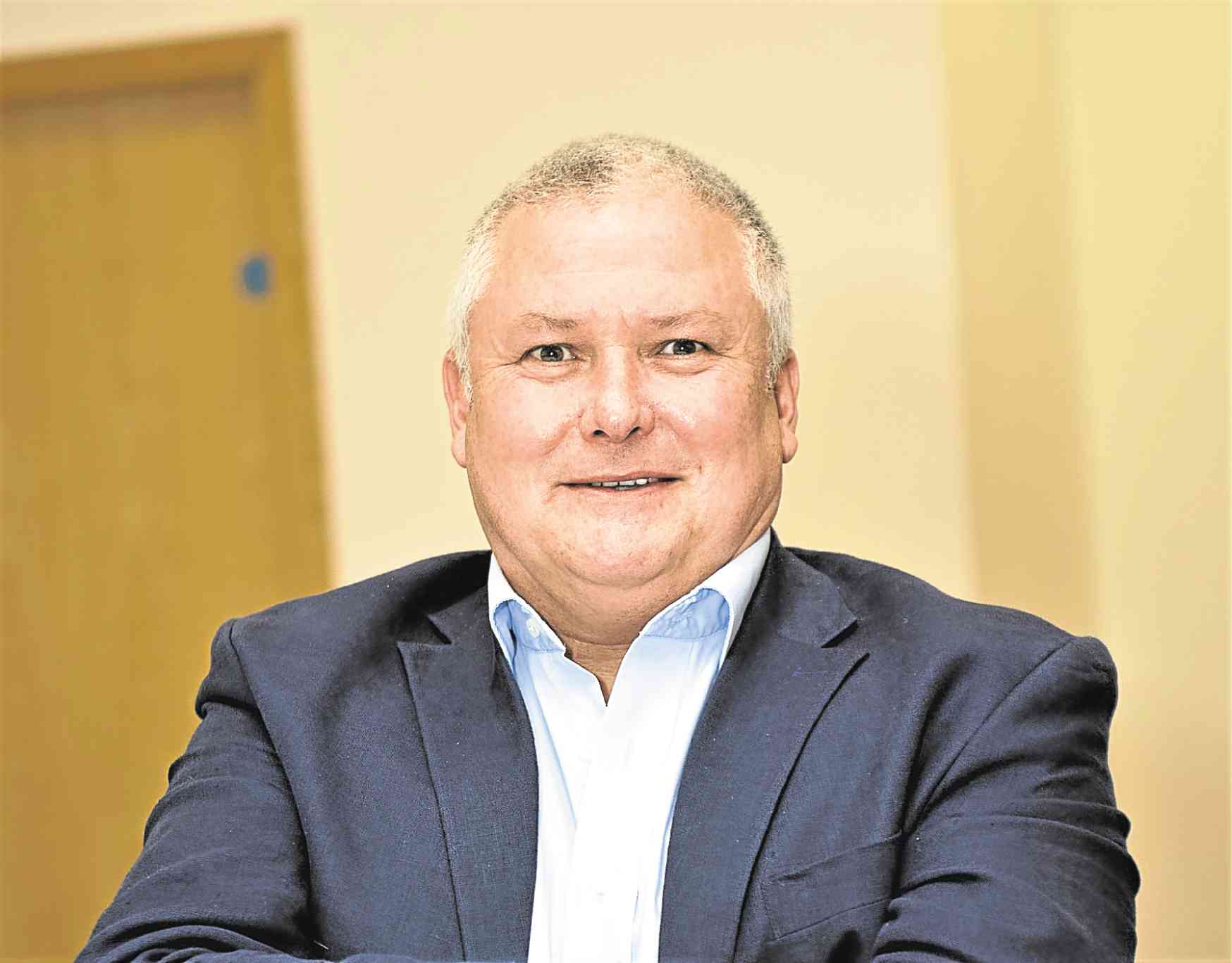 “I shave my hair for the show,” Conleth Hill (Lord Varys) explained. He wore a full crown of hair in our interview.

Laughing, he shared, “I’ve been told by taxi drivers that I sound like Lord Varys when I have hair. I go, ‘Oh really, that’s interesting.’”

Interestingly, Conleth was initially not interested in joining the cast of the phenomenally successful epic fantasy, adapted by David Benioff and D.B. Weiss from George RR Martin’s novels.

Conleth revealed, “I have to be very honest—I resisted ‘Game of Thrones’ so much when it was first put to me because, like everyone else who hadn’t read the books, we knew nothing about it. I kept saying to my agent, ‘I’m not into dragons, swords and sorcery.’ Eventually, David and Dan were in Belfast. My agent said, ‘They’re in Belfast. It’s an hour away—just go meet them.’”

“I’ll miss my friends and the comradeship,” declared Iain Glen (Jorah Mormont). “I don’t know how many—someone will know—it will be a Trivial Pursuit question: How many actors in ‘Game of Thrones’ were in the pilot and every single season subsequently? I think it’s 13. So it’s very unusual.

“Your life as an actor is very ephemeral and you get used to that slightly superficial nature of things. You get involved with people quickly. Then you have to say goodbye and you’re put in with a different bunch of people. That suits an actor’s slightly flibbertigibbet nature. So it’s unusual to come do something and come back to it. And you really grow. Your feelings for each other evolve over time. So it’s the friendship, really.

“But I know it will always cast a wonderful shadow and it will be with us, everyone who was involved, for the rest of our careers, I’m sure. I don’t begrudge it for a second. But it’s been utterly transformative for all of us who have been involved in it. Whether they were the lovely young boys and girls whom the show made stars or more seasoned actors like myself, it’s what we’re associated with.

“It’s been an incredible roller-coaster journey. I love coming back each season, getting into my trailer and putting on those smelly old worn clothes. I just think this is such an odd thing to do as an actor and it reminds me how special it is each time.

“I can’t tell you what we’re currently shooting, but everyone is always, ‘Oh, this is the last time I’m going to be in this location. Is this the last scene that we have?’ Everything has that sense of ending.”

Is he in the last episode? “Do you really think I’m going to answer that question?” Iain shot back with a laugh. “No, yes, yes, no, no, yes.”