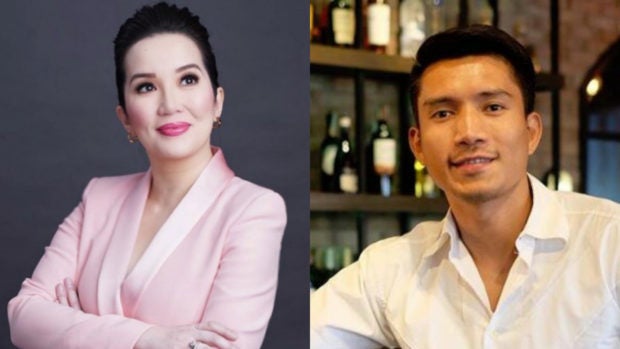 Although they had some rough times together, Kris Aquino has something to thank ex-husband James Yap for —their son Bimby.

The Queen of All Media made this remark in a new vlog entry on “The Aquinos” YouTube channel on Monday, March 18.

Aquino first showed a trinket she received from an online store, and explained its properties.

She then recalled that when she and the basketball player were going through hard times, Aquino had a bracelet that had figures of two birds joined together.

“Kasi ‘di ba, when you’re trying to save your marriage, kung anu-ano yung mga paniniwalaan mo,” the media personality said about what the bracelet meant to her at the time.

(Because when you’re trying to save your marriage, you’ll start to believe in all these superstitions just to salvage it.)

But from out of nowhere, Aquino said the bracelet suddenly “exploded,” which she thought was a way of telling her that her marriage to Yap was over.

Despite their falling out, she said something about Yap on a lighter note: “Pero at least (But at least), it (our marriage) produced Bimb, thanks!”

The media personality added that she decided to “let go of all the negativity” toward her ex-husband, as their son is turning 12 years old in April.

“The greatest gift talaga that I have is Bimb,” Aquino said. “So for that, thank you and God bless you and have a good life ahead of you.”

In the past, Aquino has been throwing shots at Yap for his supposed lack of support of Bimby. At one point, she took a hit at him for his birthday message to their son last year. She also said that Bimby would have appreciated his father more if the latter showed more effort and paid child support.

Aquino and Yap were married in 2005, and welcomed Bimby two years later. She announced in 2010 that their marriage was over, and was officially annulled in 2012.  /ra