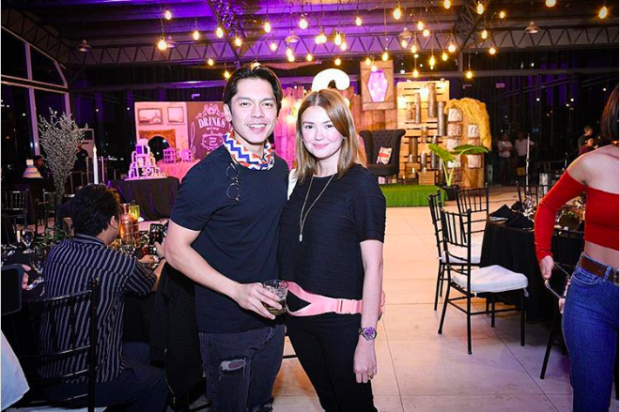 It turns out that Angelica Panganiban and Carlo Aquino do not have the warm friendship they shared before.

In a press conference for her daytime teleserye “Playhouse,” Panganiban admitted that she and Aquino are no longer friends. The interview was late uploaded in the RideR.ph YouTube channel on Tuesday, March 12.

Since they are not friends anymore, she said both of them no longer communicate with each other. “Matagal na, basta matagal na rin (It’s been a long time now, I’ll leave it at that),” Panganiban answered when asked how long they have not reached out to each other.

Panganiban added they maintained a “civil” relationship when it came to being co-workers in the teleserye. It will be noted that in “Playhouse” Aquino plays Harold who eventually falls for Panganiban’s character Patty.

She also said that for now,  she is not open to working with him again on another project.  “Siguro panahon yung makakapag-sabi,” Panganiban said. “Kung buhay pa siguro ako nun.”

(Maybe only time will tell. If I’m still alive by then.)

Did she feel that Aquino led her into believing they’d get back together? “Yun ang sabi niya, umasa daw ako (That’s what he said, that I should be hopeful),” she said.

In January, Panganiban first declared she would distance herself from Aquino after getting irked over a netizen’s comment that read: “Wag mong idaan sa social media lahat. Minsan nakakaduda rin if gaano ka kagenuine mag care for Carlo.”

(Don’t post everything on social media. Sometimes it’s getting to be doubtful whether you genuinely care for Carlo.)

She took to social media again days later, this time appealing to fans to help her move on from someone. Although she did not drop names, fans speculated that she was referring to the actor.

The two, who not only were co-stars but ex-lovers in real life, first reunited in the 2018 film “Exes Baggage.”  Katrina Hallare /ra