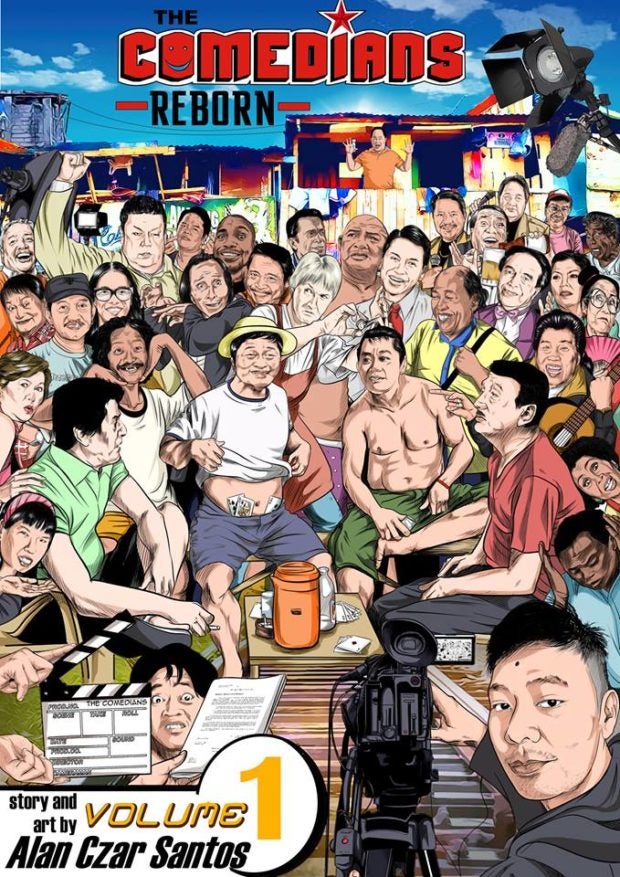 Comedians Bentong and Chokoleit, who passed away this year, were also included.

Santos told INQUIRER.net that he wanted to create a world or universe where the late entertainers will come alive again “in that perspective we won’t forget them and their contribution will be remembered.”

He said he started to do his research in January and finished his creation just last week.

“Nag-research a[ko] [ng] maigi and carefully to know if the comedians ay totoong patay na then put the whole concept na malagay sila lahat to give tribute to them,” Santos said.

(I did my research carefully to know the comedians have really passed on. Then I put together the whole concept to include them in the tribute.)

Santos will unveil the 30-page digital comic book on his Facebook page “The Comedian – Reborn” on Tuesday.

Santos said the comic book revolves around the concept of fantasy “involving Filipino myths and folklore” peppered with dialogues of the comedians and entertainers featured in the front page of the book, which he first uploaded on Monday.

“This comic/work is to honor and to give tribute those talented, astonishingly funny and brilliant late comedians who made us laugh, who we grew up watching over & over again, they brought us so much laughter, joy and made such a big impact to our childhood lives. Their jokes will always be missed, and NOW THEIR LEGACY CONTINUES,” he wrote in the caption.’ /ee

Read Next
50 foods to eat for your health and for the planet
EDITORS' PICK
Average daily COVID-19 deaths in PH down from 38 to 12 — OCTA
Bato Dela Rosa now having second thoughts about legalizing drug use
House energy committee chair Arroyo bats for cheap electricity
The vivo X80 Series and vivo V25 Series is on everyone’s wishlist
Senate, House bicam conference on proposed 2023 budget starts
vivo’s coming to town to grant wishes with more holiday promos
MOST READ
LOOK: Vhong Navarro transferred to BJMP detention facility in Taguig
The Elephant Man in the Senate
Posh village as ‘shabu’ haven
LOOK: Zanjoe Marudo bonds with Ria Atayde, her family
Follow @CMRamosINQ on Twitter
Don't miss out on the latest news and information.